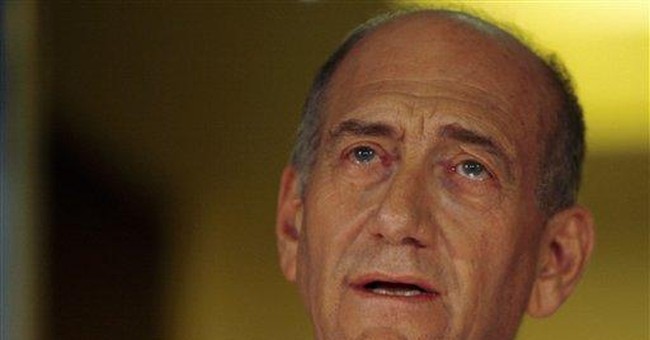 Exit, pursued by a bear.

Is it some kind of requirement that a politician who's finally leaving the stage has to depart with a graceless blast at the press, the opposition or the universe in general?

Call it the Nixon Rule, as in Richard Nixon's whine when he lost a race for governor of his native California in 1962: "As I leave you, I want you to know - just think about how much you're going to be missing. You won't have Nixon to kick around any more, because, gentlemen, this is my last press conference." (He was wrong about that, too.)

Ehud Ohlmert followed the Nixon Rule last week when he announced his long anticipated resignation as Israel's premier just ahead of the Israeli prosecutors digging into his personal finances: "I was forced to defend myself against relentless attacks by self-styled fighters for justice who sought to oust me from my job and saw all means as justifying of that end."

Mr. Olmert leaves behind a record strewn with failure after failure - all rooted in overweening ambition, ethical insensibility, poor judgment, and the kind of arrogance typical of successful politicians who haven't been caught yet. All that on top of a general incompetence, which in his case was exacerbated by a lack of any extensive military experience in a country that must regularly defend its existence on the battlefield.

The one thing Ehud Olmert seemed adept at was political intrigue, and now even that talent seems to have been undone by his avarice. The most embarrassing part of his leave-taking is the sheer tawdriness of the accusations against him. They add a final, grace(less) note to his fall: taking envelopes of cash Spiro Agnew-style, double and triple billing for travel expenses, always holding his hand out for more. Is this a prime minister or a small-time grafter? What's he supposed to be guilty of - double bookkeeping and incessant schnorring?

Mr. Olmert's more dangerous shortcomings as a leader were on embarrassing display during the course of the Second Lebanon War two years ago this month. Israel somehow managed to fight to a draw only because of the courage and improvisation of her common soldiers - the kind of long-suffering reservists who pull on their boots and hustle off to the nearest front whenever word comes that there's another war on. Once again they had to overcome the faults of their leaders, whose incompetence didn't keep them from being arrogant, too.

In a different time and in a different Israel, another premier - Golda Meir - prepared to step aside after an official inquiry criticized her for not having foreseen the surprise attacks from both north and south that stunned Israel at the beginning of the Yom Kippur War of 1973. Even though that same report also pointed to her steadfastness after the onslaught began. (It was said at the time in Israel that Golda had proved herself the only real man in the Cabinet.)

What a contrast with the mod Israel: After an official inquiry into Israel's last war detailed Ehud Olmert's multiple failures as a wartime leader, it took him over a year to announce his resignation. And then it wasn't because of his manifest inadequacies in that conflict but because of still another investigation of his tangled finances.

Ehud Olmert is all too representative of mod, upwardly mobile Israel. Is it only Ariel Sharon, the Israelis' last great general, who's fallen into a comatose state, or has the spirit of the whole country done so as well? A once pioneering, almost spartan society seems to have developed a disease at its psychic core. Call it Olmertism.

Thanks to the byzantine rules of Israel's semi-parliamentary, semi-constitutional but always raucous democracy, Ehud Olmert will remain in office for an uncertain while, the timing of his exit as cloudy as most other things in the always hazy Middle East.

If there was one success of the Olmert Years, it was the virtual completion of the wall - excuse me, security barrier - that now has prevented all but a few suicide attacks within most of the Jewish state. And, oh yes, one more thing: Ehud Olmert can also take credit for making the hawkish leader of the opposition, Benjamin Netanyahu, the popular favorite to succeed him.