Paul Driessen
|
Posted: May 02, 2021 12:01 AM
Share   Tweet
The opinions expressed by columnists are their own and do not necessarily represent the views of Townhall.com. 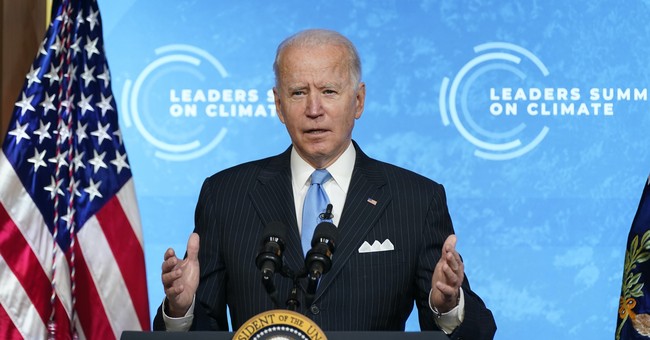 Via executive orders, regulatory edicts and partisan Green New Deal legislation, President Biden intends to slash US carbon dioxide and other greenhouse gas emissions by 50 percent below their 2005 peak by 2030, and eliminate them (and fossil fuel use) by 2050. But, as AOC’s former chief of staff noted, the GND is not just about transforming America’s energy system; it’s about changing the entire economy.

This radical transformation is driven by three fundamental articles of faith, none of them base on reality.

The crisis of manmade climate cataclysms necessitates this GND. Natural forces no longer play a role. Rising temperatures since the Little Ice Age ended two centuries ago are due solely to fossil fuel use and CO2 emissions, as are all extreme weather events over recent decades. The 12-year absence of Category 3-5 hurricanes making US landfall (from Wilma in 2005 to Harvey in 2017) is irrelevant – as is the significant decline in violent (F3-F5) US tornadoes 1986-2020 compared to 1950-1985, and that for the first time in history not one violent twister hit the United States in 2018.

American foreign policy must construct a values-based world order that can tackle humanity’s common problems in an organized, collegial manner. Such problems cannot be solved by national governments acting alone, so world leaders have no choice but to work together. Wall Street Journal global view columnist Walter Russell Means calls this the Biden Doctrine.

However, China, India and many other countries don’t view climate change as an existential threat – much less a problem that justifies sacrificing their energy needs, economic growth, national security and geopolitical aspirations. They may give lip service to the alleged “climate crisis,” “decarbonization” and “green energy.” But they know their futures are inextricably tied to the abundant, reliable, affordable energy that only oil, natural gas and coal (plus hydroelectric and nuclear) can provide. They are not going to “work together” with leaders who expect them to undermine their most vital goals.

The Biden Doctrine’s second inherent failing is that GND policies will inevitably hollow out America’s industrial and military might, destroy jobs, and reduce US leverage in future negotiations. China already controls the raw material supply chains for wind turbines, solar panels, battery modules for electric vehicles and backup power systems, and countless other technologies. Even our advanced military equipment relies on metals and minerals that are mined and/or processed by Chinese companies. GND policies would only worsen the situation.

Replacing the 80% of US energy that now comes from fossil fuels can be accomplished quickly, easily, affordably and ecologically – with clean, green, renewable, sustainable, carbon-free wind and solar technologies that will create millions of good jobs, and save our planet from climate devastation.

The foundation for this presumed global transformation is the Biden Administration’s Materials Acquisition for Global Industrial Change program – better known by its acronym: MAGIC.

(This is not an official name. In fact, there is no such program, and no evidence that Team Biden has a clue about what would be required to transform America from fossil to green energy. MAGIC simply provides the most accurate description of how they expect to achieve this transformation.)

However, at 3.6 tons per megawatt, just this Phase 1 offshore wind scheme would require 108,000 tons of copper. At 0.8% metal in an average ore globally, that would involve mining, crushing and processing some 13,000,000 tons of ore!

14-MW Vesta, GE or Siemens-Gamesa turbines stand 815-850 feet above 30-100 foot deep ocean waters (160 feet higher than the Washington Monument). Each blade is 350 feet long. Every turbine weighs in at 2,000-3,000 tons of metals, plastics and composites, plus massive concrete-and-rebar bases. Phase 1 alone will involve tens of millions of tons of materials, billions of tons of ores and overburden.

Add in materials for subsea electrical cables, onshore transmission lines, onshore wind turbines and solar panels, backup battery systems, electric vehicles, electric heating systems and other GND technologies – to run the entire USA – and we’re looking at tens of billions of tons of metals and minerals, trillions of tons of ores, and mines, processing plants and factories all over the world.

Team Biden claims “renewable” energy is “carbon-free.” It gets away with this deception by looking only at electricity generation after turbines and panels are installed – and ignoring how the raw materials are extracted and processed and how the technologies are manufactured...far from the United States...with fossil fuels every step of the way...under minimal to nonexistent laws for air and water pollution control, habitat and wildlife protection, mined land reclamation, child and slave labor, and workplace safety.

Unencumbered by Paris climate treaty restrictions, emerging economies will gladly sell us “green, renewable” technologies that send electricity costs to several times today’s prices and drive factories and industries out of business, unable to compete with China and India.

The past winter’s Texas blackout will become commonplace, where wind electricity generation plummeted 93% – but natural gas generation rocketed 450% to make up the difference, even though pipelines could not supply enough fuel, because legislators and regulators had decreed that pipeline compressors run off the compromised grid, instead of on gas from the pipelines.

President Biden’s inability to comprehend these Green New Deal realities may be due to his diminished mental capacity. But it could also be the result of rarely having to exercise his mind – in an environment where woke, hard-green, climate-obsessed, cancel-culture ideologues permit no discussion, questions or dissent; where advisors, cabinet members, regulators and legislators are of the same mindset, or too timid to speak up; and where schools, news and social media, Big Tech, government agencies, corporate chiefs and even book publishers likewise silence, ignore and punish anyone who offers differing views.

We can only hope enough citizens pound enough sense into our ruling classes to eliminate this belief in MAGIC, climate monsters and other countries crazy enough to follow Mr. Biden into economic suicide.