No Plan B for Planet A

Paul Driessen
|
Posted: Nov 23, 2019 12:01 AM
Share   Tweet
The opinions expressed by columnists are their own and do not necessarily represent the views of Townhall.com. 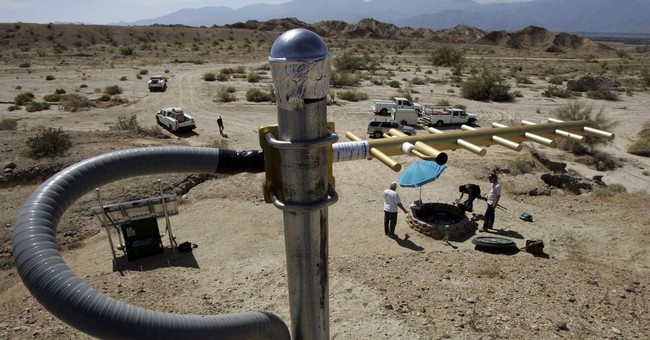 Environmentalists and Green New Deal proponents love to say we need to take care of the Earth, because “There is no Planet B.” Above all, they insist, we must eliminate fossil fuels, which they say are causing climate change worse than the all-natural ice ages, Medieval Warm Period or anything else in history.

Their Plan A is simple: Keep fossil fuels in the ground. More than a few Democrat presidential aspirants have assured us they would begin implementing that diktat their very first day in the White House.

Their Plan B is more complex: Replace fossil fuels with wind, solar, biofuel and battery power – their supposedly renewable, sustainable alternatives to oil, gas and coal – apparently by waving a magic wand.

We don’t have a Planet B. And they don’t really have a Plan B. They just assume and expect that this truly monumental transformation will simply happen. Wind, solar, battery and biofuel technologies represent the natural evolution toward previously unimaginable energy sources – and they will become more efficient over time, they say. They and their colleagues are smart, and they know this to be true.

Ask them for details, and their responses range from evasive to delusional, disingenuous – and outrage that you would dare ask. The truth is, they don’t have a clue. They’ve never really thought about it. It’s never occurred to them that these technologies require raw materials that have to be dug out of the ground, which means mining, which they vigorously oppose (except by dictators in faraway countries).

They’re lawyers, lawmakers, enforcers. But they’ve never been in a mine, oilfield or factory. Probably haven’t even been on a farm. They think dinner comes from a grocery store, electricity from a wall socket, and they can just pass laws requiring that the new energy materialize as needed. And presto!

It’s similar to the way they handle climate change. Their models, reports and headlines bear little or no resemblance to the real world outside our windows – on temperatures, hurricanes, tornadoes, sea levels, crops or polar bears. But the crisis is real, the science is settled, and anyone who disagrees is a denier.

So for the moment, we won’t challenge their climate or fossil fuel ideologies. We’ll just ask: How exactly are you going to make this happen? How will you ensure that your Plan A won’t destroy our economy, jobs and living standards? And your Plan B won’t devastate the only planet we’ve got? I’ll say it again:

(2) Wind and sunshine may be renewable, sustainable and eco-friendly. But the lands, habitats, wildlife, wind turbines, solar panels, batteries, transmission lines, raw materials, mines and laborers required or impacted to harness this intermittent, weather-dependent energy to benefit humanity absolutely are not.

(3) The supposed cure they say we must adopt is far worse than the climate disease they claim we have.

Those turbines would sprawl across three-fourths of the Lower 48 US states – and require 15 billion tons of steel, concrete and other raw materials. They would wipe out eagles, hawks, bats and other species.

Go offshore instead, and we’d need a couple million truly monstrous 10-MW turbines, standing in water 20-100 feet deep or on huge platforms in deeper water, up and down our Atlantic and Pacific coasts. Not as many of the beasts, but each one a lot bigger – requiring vastly more materials per turbine.

A Category 4 hurricane going up the Atlantic seaboard would wipe out a lot of them – leaving much of the country without power for months or years, until wrecks got removed and new turbines installed.

Using solar to generate just the 3.9 billion MWh would require completely blanketing an area the size of New Jersey with sunbeam-tracking Nellis Air Force Base panels – if the Sun were shining at high-noon summertime Arizona intensity 24/7/365. (That doesn’t include the extra power demands listed for wind.)

Solar uses toxic chemicals during manufacturing and in the panels: lead, cadmium telluride, copper indium selenide, cadmium gallium (di)selenide and many others. They could leach out into soils and waters during thunderstorms, hail storms, tornadoes, hurricanes, and when panels are dismantled and hauled off to landfills or recycling centers. Recycling panels and wind turbines presents major challenges.

Bringing electricity from those facilities, and connecting a nationwide GND grid, would require thousands of miles of new transmission lines – onshore and underwater – and even more raw materials.

If we continue to ban mining under modern laws and regulations here in America, those materials will continue to be extracted in places like Inner Mongolia and the Democratic Republic of Congo, largely under Chinese control – under labor, wage, health, safety, environmental and reclamation standards that no Western nation tolerates today. We’d get serious pollution, toxics, habitat losses and dead wildlife.

Even worse, just to mine cobalt for today’s cell phone, computer, Tesla and other battery requirements, over 40,000 Congolese children and their parents work at slave wages, risk cave-ins, and get exposed constantly to toxic and radioactive mud , dust, water and air. Many die. The mine sites in Congo and Mongolia have become vast toxic wastelands; the ore processing facilities are just as horrific.

Meeting GND demands would multiply these horrors many times over. Will Green New Dealers require that all these metals and minerals be responsibly and sustainably sourced, at fair wages, with no child labor – as they do for T-shirts and coffee? Will they now permit exploration and mining in the USA?

Meeting basic ecological and human rights standards would multiply GND energy costs five or ten times over. That alone could put cell phones, laptops, Teslas and GND Plan B transformation beyond economic reach for many. How long can Green New Dealers remain so callously indifferent about all these issues?

To now, this has all been out of sight, out of mind, in someone else’s backyard, in some squalid far-off country, with other people and their kids doing the dirty, dangerous work of providing basic, essential raw materials. That lets AOC, Senator Warren, Al Gore, Barack Obama, Michael Mann and other “climate crisis-renewable energy” advocates preen about climate justice, sustainability and saving Planet Earth.

They don’t want to discuss bogus hockey stick temperature graph; the ways Mann & Co. manipulated and hid data, and deleted incriminating emails; their inability to separate human influences from the powerful natural forces that have caused climate changes throughout history; or the absurd notion that the tiny 0.01% of Earth’s atmosphere that is carbon dioxide from fossil fuel use over the past 50 years is somehow responsible for every storm and drought today. But they won’t be able to avoid those debates forever.

Meanwhile, we sure are going to be discussing the massive resource demands, ecological harm and human rights abuses that the climate alarm industry would impose in the name of protecting the Earth and stabilizing its perpetually unstable climate. They certainly won’t be able to dodge those issues in 2020.

Paul Driessen is senior policy analyst for the Committee For A Constructive Tomorrow (www.CFACT.org) and author of books and articles on energy, climate, environmental and human rights issues.