Getting to the Bottom of EPA Climate Fraud

Paul Driessen
|
Posted: May 18, 2019 12:34 PM
Share   Tweet
The opinions expressed by columnists are their own and do not necessarily represent the views of Townhall.com. 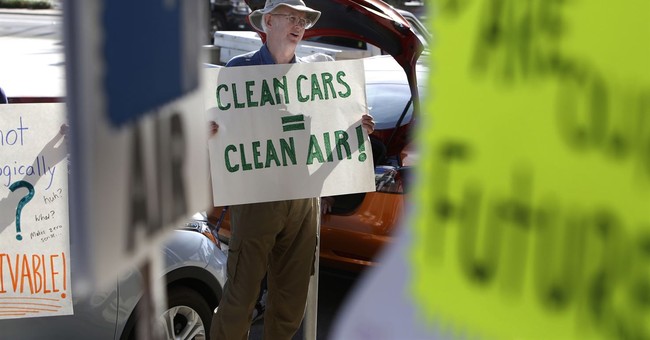 In December 2009, the Obama Environmental Protection Agency issued its Endangerment Finding (EF) – decreeing that carbon dioxide (CO2) and other “greenhouse gases” (GHGs) endanger the health and welfare of Americans. In the process, EPA ignored the incredible economic, health and welfare benefits of fossil fuels – and the fact that (even at just 0.04% of the atmosphere) carbon dioxide is the miracle molecule that enables plants to grow and makes nearly all live on Earth possible.

EPA turned CO2 into a “dangerous pollutant” and ruled that fossil fuels must be eradicated. The agency subsequently used its EF to justify tens of billions of dollars in climate research, anti-fossil fuel regulations, and wind and solar subsidies; President Obama’s signing of the Paris climate treaty; and proposals to spend trillions of dollars a year on Green New Deal (GND) programs.

And yet, despite multiple demands that this be done, there has never been any formal, public review of the EF conclusion or of the secretive process EPA employed to ensure the result of its “analysis” could only be “endangerment” – and no awkward questions or public hearings would get in the way.

Review, transparency and accountability may finally be on the way, however, in the form of potential Executive Branch actions. If they occur – and they certainly should – both are likely to find that there is no valid scientific basis for the EF, and EPA violated important federal procedural rules in rendering its predetermined EF outcome. (One could even say the EF was obtained primarily because of prosecutorial misconduct, a kangaroo court proceeding, and scientific fraud.) Failure to examine and reverse the EF would mean it hangs like Damocles’ sword over the USA, awaiting the next climate-focused president.

To the consternation and outrage of climate alarmists, keep-fossil-fuels-in-the-ground radicals, and predictable politicians and pundits, President Trump may soon appoint a Presidential Committee on Climate Change, to review “dangerous manmade climate change” reports by federal agencies.

Meanwhile, the Competitive Enterprise Institute has filed a formal petition with EPA, asking that the agency stop utilizing and relying on the EF – and instead subject the finding to a proper “high level” peer review, as required by the Information Quality Act. The reasoning presented in CEI’s succinct and persuasive petition is compelling. Its main points are these.

* EPA’s Endangerment Finding and the Technical Support Document (TSD) that supposedly justifies it did not meet Information Quality Act (IQA) requirements for how the work should have been done.

* The agency’s evaluation of the then-current climate change and related science was clearly a “highly influential scientific assessment” (HISA), which triggered important IQA and OMB rules governing rulemakings that have “a potential impact of more than $500 million in any year” … or present “novel, controversial or precedent-setting” changes … or would likely raise “significant interagency interest.”

* EPA’s “Clean Power Plan” to shut down coal-fired power plants alone would cost $2.5 billion in annual compliance costs, EPA admitted. Its motor vehicle rules would cost tens of billions. The Paris agreement and GND would add trillions per year in costs to the US economy. All are based on the EF. And all were certainly controversial and generated significant interest by multiple other government agencies.

* EPA deliberately downplayed the significance of its review and decision, ignored the IQA and OMB requirements, and refused to allow citizens, independent energy, climate and health experts, or even scientific and professional societies to nominate potential reviewers or participate in the EF analysis.

* Instead, the agency utilized an entirely internal review process, designed and conducted entirely by its own federal employees. Those employees had substantial conflicts of interest, because they were reviewing their own scientific work; would be writing, implementing and enforcing regulations based on that work; and had jobs and professional status that might be affected by the outcome of their review.

[The review team even summarily dismissed one of EPA’s most senior energy and economic experts, because his probing analyses and comments “do not help the legal or policy case” for the EF decision.]

* EPA never allowed the general public or scientific, energy, health or economic experts to review its draft scientific assessment; never sponsored any public meetings; and never let its internal peer reviewers see any of the public comments that outside experts and organizations submitted to the agency.

* In fact, none of the EPA peer review panel’s questions and responses have ever been made public.

Each of these actions violated specific IQA and OMB peer review guidelines. Indeed, two years after the Endangerment Finding was issued, even EPA’s own Inspector General found that that agency had violated rules governing all of these matters. And yet even then nothing was done to correct them.

The entire Obama EPA process smells like a crooked prosecutor who framed CO2 and was determined to get a conviction. The agency built its entire case on tainted, circumstantial evidence, and testimony from agency officials who had conflicts of interest and their own reasons for wanting CO2 convicted of endangering Americans. EPA reviewers ignored or hid exculpatory evidence and colluded to prevent witnesses for the CO2 defendant from presenting any defense or cross-examining agency witnesses.

A full reexamination now is essential, and not just because the Obama EPA violated every procedural rule in the books. But because EPA ignored volumes of climate science that contradicted its preordained EF finding. Because real-world climate and weather observations consistently contradict alarmist computer models and headlines. Because science is never settled … must never be driven by ideology … and must be reevaluated when new scientific evidence is discovered – or evidence of misbehavior is uncovered.

We know far more about Earth’s climate and have far more and better data than a decade ago. But climatologists still cannot explain why our planet experienced multiple ice ages and interglacial periods, Roman and Medieval warm periods, the Little Ice Age, or Anasazi, Mayan and Dust Bowl droughts.

And yet some of them insist they can accurately predict calamitous temperatures, weather events and extinctions 10, 20, 100 years from now – based on computer models whose temperature predictions are already a degree Fahrenheit above what satellites are measuring … and that rely primarily or solely on carbon dioxide, while downplaying or ignoring fluctuations in solar energy and cosmic ray output, the reflective properties of clouds, El Niño events, ocean current shifts, and other powerful natural forces.

And then, in the face of all that uncertainty and politicized science, they demand that the United States slash or eliminate its fossil fuel use – and that the poorest nations on Earth continue to forego fossil fuel development, and instead remain wracked by joblessness, misery, disease, malnutrition and early death.

Thankfully, poor countries in Asia, Africa and Latin America are building or planning more than 2,000 coal and gas-fueled generating plants. They deserve to be freed from carbon-colonialism and eco-manslaughter – and to become as wealthy, healthy and vibrant as modern industrialized nations that also relied on … and still rely on … fossil fuels.

But if those countries are building fossil fuel power plants, driving millions more cars and trucks, and emitting multiple times more CO2 and other GHGs than the United States – why should the USA slash or eliminate its coal, oil and natural gas? Why should we roll back our job creation, living standards, health and welfare, based on the IPCC’s junk science and EPA’s fraudulent Endangerment Finding?

For unfathomable reasons, a few White House advisors still oppose any PCCS or IQA-triggered review of the EF or junk/fraudulent science behind it. Perhaps they are too closely tied to the Deep State or invested financially or ideologically in the $2-trillion-per-year Climate-Industrial Complex. But whatever their reasons, they must be ignored in favor of science and the national interest. Let’s get the job done – now!

Write to President Trump: Ask him to appoint his Presidential Committee on Climate Science and to instruct the EPA to agree to the CEI petition and review the 2009 Endangerment Finding forthwith!

Paul Driessen is senior policy advisor for the Committee For A Constructive Tomorrow (www.CFACT.org) and author of many articles and books on energy, environmental and human rights issues.