Paul Driessen
|
Posted: Mar 07, 2019 12:01 PM
Share   Tweet
The opinions expressed by columnists are their own and do not necessarily represent the views of Townhall.com. 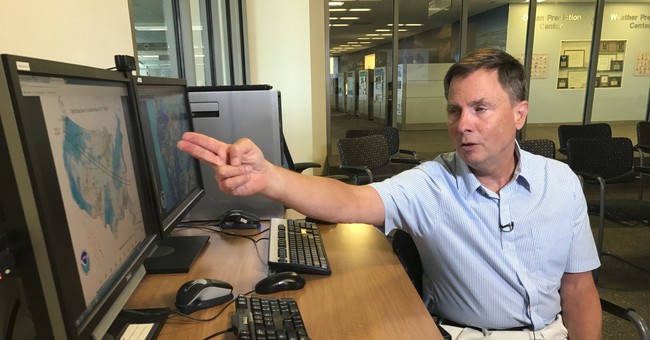 Democrats, climate campaigners and renewable energy interests are in full outrage mode over news that President Trump intends to launch a Presidential Committee on Climate Science.

The PCCS would, at long last, review and question the “dangerous manmade climate change” reports by federal agencies and investigations funded by them. The committee would be led by Dr. Will Happer, a highly respected scientist and well known skeptic – not of climate change, but of manmade climate chaos. He would be joined by other prominent experts – of whom there are many – who share his doubts.

No way! the climate alarmists rant. How dare you question our disaster claims? Our settled science?

No! How dare YOU use those claims to justify your agenda – and your continued efforts to bludgeon and silence us into submission – without letting anyone examine, much less debate, your supposed evidence?

For years, you have loudly and incessantly asserted that the United States and world must end fossil fuel use, or we are “doomed.” Now you’re demanding that the United States completely upend its energy production, transportation and manufacturing sectors, housing and office buildings, and entire economy. You want the federal government to control and limit our lives, choices and living standards – and redistribute our wealth, even to those “unwilling to work,” according to confiscatory socialist principles.

For years, you Democrats, environmentalists, Deep State bureaucrats, government-grant-dependent scientists, news and social media have colluded to censor and silence manmade climate chaos skeptics, and stifle any debate. All of you have huge financial, reputational and power stakes in this.

Your Climate Industrial Complex is a $2-trillion-per-year global behemoth. Your Green New Deal would cost this nation up to $93 trillion by 2030 – sticking every US family with a $65,000 annual bill.

And still you insist that the science is settled, that there is no room for discussion, that we must act immediately to “save the planet” from climate and extreme weather disaster. Now you want to wrap up your kangaroo court proceedings – with our side given no opportunity to present our evidence, defend fossil fuels and carbon dioxide, examine your alleged evidence, or cross-examine your experts.

If your evidence is so solid and unimpeachable, you should be more than happy to lay it on the table, subject it to scrutiny, question our experts, and let us question yours – extensively and mercilessly.

Your radical agenda and actions are un-American, totalitarian, anti-science, and contrary to our most fundamental principles of open, robust debate – on one of the most critical issues in US history.

A large majority of Americans believe global warming is happening. Well, it certainly is. No one denies that. And thank goodness, or we’d still be stuck in the Little Ice Age. But that’s not the issue. The issues are: Is any likely future warming going to be disastrous? And are fossil fuels to blame?

You claim the answer is yes. Again, where is your proof? If you have any actual evidence, lay it on the table. Show us exactly where the natural forces that have driven countless climate changes throughout history end – and where the human factors begin. Quantify them. Don’t give us computer models that simply reflect the assumptions that went into them. Present solid, Real World evidence. If you have any.

While you’re at it, you also need to prove that dismantling America’s energy and economic system will make one whit of difference in our climate and weather (assuming for the sake of argument that human carbon dioxide emissions now drive climate and weather) – when China, India and other countries are building thousands of coal and natural gas fueled power plants, and millions of cars and trucks.

Their emissions already dwarf ours. And they are not going to give up fossil fuels for decades, if ever.

Prove your GND energy system can actually power America, without destroying jobs, living standards, manufacturing, health, prosperity and environment. As I have said over, over and over, it cannot be done. Your alternatives are not workable, affordable, green, renewable, ethical, ecological or sustainable.

Temperatures have risen by tenths or hundredths of a degree in recent years – less than the margin of error, and most of the “highest temperatures on record” have been in urban areas, where local manmade heat skews the data. We’re also experiencing record cold and snow in numerous locations.

The average prediction by 102 climate models is now a full degree Fahrenheit above what satellites are measuring. Michael Mann’s climate model could concoct hockey sticks from telephone numbers and other random numbers. Are we supposed to trust these models on critical energy policy?

A warmer Arctic? The Washington Post did report that “the Arctic Ocean is warming up, icebergs are growing scarcer, and in some places seals are finding the water too hot.” But that was in 1922!

Oceans cannot become “more acidic,” because they are not and have never been acidic. Earth’s oceans are slightly alkaline. That slight alkalinity has decreased slightly (from 8.2 on the pH scale to 8.1) over the past few decades. But they are not getting acidic … and won’t anytime soon.

Carbon dioxide is not a pollutant. It is the miracle molecule without which most life on Earth would cease to exist. In fact, the more CO2 in the air, the faster and better crop, forest and grassland plants grow – and the better they can withstand droughts, diseases, and damage from insects and viruses.

Millions of Americans are exasperated and angry about Republicans like Congressman John Shimkus of Illinois, who recently whined that it’s “just not worth the fight anymore” to battle climate alarmism – and protect our nation’s and our children’s future. These elected officials badly need spinal implants. Or they should resign and turn their seats over to someone who will fight for us.

That’s why tens of millions hope the President Trump we elected to clean out the Deep State, get to the bottom of manmade climate chaos pseudo-science … and Make America Great Again for decades to come … will demonstrate his Real Leadership skills right now, when it is so sorely needed.

Mr. Trump: Please stand up to these Climate Totalitarians who want to destroy our nation, in the name of saving the planet from climate disasters that exist only in computer models, Hollywood movies, and self-serving assertions from the Climate Industrial Complex.

Appoint your Presidential Committee on Climate Science right now. And may the best science win.