Public Forums Should Be Open and Uncensored

Paul Driessen
|
Posted: May 26, 2018 12:01 AM
Share   Tweet
The opinions expressed by columnists are their own and do not necessarily represent the views of Townhall.com. 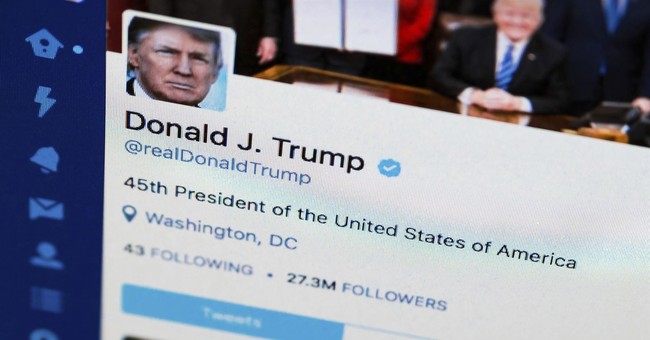 President Trump may not block even rude or obnoxious criticism from his Twitter account, because it is a public forum that is protected by the First Amendment, US District Court Judge Naomi Reice Buchwald has ruled. The President’s use of his Twitter account to comment on important policy, personnel and personal announcements made it a public forum, akin to a park or town square, she concluded.

Blocking unwanted tweets is thus viewpoint discrimination, which public officials are not permitted to engage in. Indeed, his Twitter account is not just a public forum. It is also “government space,” and thus may not be closed off, Judge Buchwald continued – rejecting a Justice Department argument that, since Twitter is a public company, it is beyond the reach of First Amendment public forum rules.

Free speech proponents hailed the ruling as a groundbreaking decision, saying it expands constitutional protections deep within the realms of social media. The executive director of Georgetown Law School’s Institute for Constitutional Advocacy and Protection called it “a critical victory in preserving free speech in the digital age.” Blocking people from responding critically to presidential tweets is unconstitutional, because it prevents them from participating personally and directly in that forum, others said.

The Justice Department said it disagreed with the decision and was considering its next steps. A better suggestion: Embrace the decision. Expand on it. Assess how these District Court principles and free speech guidelines can be applied other vital free speech arenas. Take it as far as you can.

Some will then predictably want to construe the decision narrowly, saying it applies only to government officials, perhaps especially conservatives who support this president. Conservatives, the White House and the Trump Administration need not and should not be bound by such self-serving assertions.

As Supreme Court and numerous lower court decisions have interpreted the Civil Rights Act and other laws, no person may employ race, color, creed, religion, sex, sexual orientation, national origin, disability status or other categories, to discriminate in admissions, hiring or anything else under any program or activity receiving any form of federal financial assistance, including loans or scholarships. Those that do discriminate will lose their Internal Revenue Service non-profit status and their government funding.

Should that list of categories not include one of the most vital and fundamental civil rights of all – the one addressed and protected by the very first amendment to the United States Constitution? The right of free speech and free assembly, especially regarding one’s beliefs, interests and political viewpoints, and one’s ability to participate in discourse and debate over important political and public policy matters?

Our colleges and universities were once society’s crucible for developing and thrashing out ideas. Sadly, as anyone with a milligram of brain matter can attest, they have become bastions of one-sided ideological propaganda and intolerance. Every conceivable element of “diversity” is permitted and encouraged – nay, demanded – except for that most vital and fundamental civil right of free speech and open, robust debate.

That right now applies only to liberal-progressive-leftist views and ideologies. Anything that challenges or questions those teachings is vilified, denounced and silenced, often violently – as being hurtful, hateful, objectionable or intolerable to liberals. Faculty members are hired, protected, promoted or fired based on their social, scientific or political beliefs. Viewpoint discrimination, bullying and mobbing are rampant.

If they tolerate or encourage viewpoint bullying, mobbing or violence, they are violating the civil rights of students, professors and speakers whose views have been deemed inappropriate, discomforting, hurtful or intolerable to the fragile sensitivities of climate alarmist, pro-abortion, atheist and other liberal factions.

Judge Buchwald’s ruling and the reactions of free speech advocates provide useful guidelines to buttress this approach. The Trump Administration, state attorneys general and free-speech/individual rights organizations should apply them to help restore intellectual rigor and open discourse to our campuses.

The ruling and reactions could also help expand constitutional protections even more deeply in the realms of digital age social media. As they suggest, today’s most popular social media sites have become our most vibrant and essential public forums: today’s parks, town squares and town halls. People, especially millennials, rely on them for news, information and opinions, often as substitutes for print, radio and television (and classrooms). But they now seem far better at censorship than at education or discussion.

Google thus allies with the manmade climate cataclysm establishment – which has received billions of taxpayer dollars from multiple government agencies, but has blocked Climate Armageddon skeptics from getting articles published in scientific journals that often publish papers that involve hidden data, computer codes and other work. Even worse, it facilitates repeated threats that skeptics should be jailed (Bill Nye the Science Guy and RFK Jr.), prosecuted under RICO racketeering laws (Senators Warren and Whitehouse), or even executed (University of Graz, Austria Professor Richard Parncutt).

Google is a private entity, there are other search engines, and those seeking complete, honest research results should see if those alternatives are any better. But there is something repugnant about mankind’s vast storehouses of information being controlled by hyper-partisan techies, in league with equally partisan university, deep state, deep media, hard green and other über-liberal, intolerant elements of our society.

Recommended
Here Are Some Questions For Joe Biden
Kurt Schlichter

Meanwhile, Google YouTube continues to use its power and position to block posting of and access to equally important information, including over 40 well-crafted, informative, carefully researched Prager University videos – because they contain what YouTube reviewers (censors) decreed is “objectionable content” on current events, history, constitutional principles, environmental topics and public policy.

Scholar-educator Dennis Prager sued YouTube for closing down yet another vital public forum to views that question, contest or simply fail to pay homage to liberal ideologies and agendas.

District Court Judge Lucy Koh concluded that YouTube did indeed apply vague standards and the arbitrary judgments of a few employees, and did indeed discriminate against Prager U by denying it access to this popular social media platform and digital public forum. However, she ruled that Google YouTube is a private company, and thus is under no obligation to be fair, to apply its services equally, or to refrain from imposing penalties on viewpoints with which its partisan officers and employees disagree.

In other words, YouTube may operate as a public forum but it is a private business and thus may discriminate as it wishes – since it does not bake cakes or provide food or overnight accommodations … or deal with any civil rights that Judge Koh wants to include among protected constitutional rights.

These actions are the hallmarks of communist, fascist and other totalitarian regimes that seek to control all thought, speech, economic activity and other aspects of our lives. They drive policies that further limit our freedoms, kill countless jobs, and cost us billions or trillions of dollars in lost productivity.

The Left is clearly afraid of conservative ideas and principles. It refuses to participate in discussions or debates that it might lose, and instead resorts to mobbing, bullying and violence to silence our voices.

Up to now, lower courts have not always been supportive of the analysis and prescriptions presented in this article. But appellate courts and the Supreme Court have yet to weigh in on the Trump Twitter, Prager YouTube, Google search bias and similar cases. So we are still in uncharted territory.

Conservatives, climate chaos skeptics and true free speech advocates should help create the legal precedents, while also pressing forward to build their own social media forums, and exposing, ridiculing, embarrassing and challenging the dominance of the Intolerant Left.