Insanity and Hypocrisy Down Under

Paul Driessen
|
Posted: Jul 15, 2017 12:01 AM
Share   Tweet
The opinions expressed by columnists are their own and do not necessarily represent the views of Townhall.com. 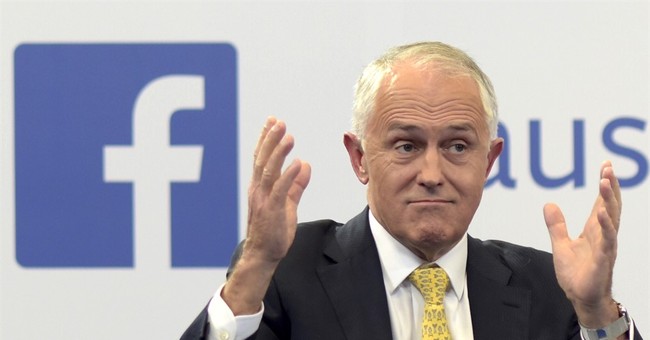 The Wall Street Journal called it the energy shortage “no one saw coming.” Actually, a lot of people did see it coming. But intent on pursuing their “dangerous manmade climate change” and “renewable energy will save the planet” agendas, the political classes ignored them. So the stage was set.

As an Australia-wide heat wave sent temperatures soaring above 105 degrees F (40.6 C) in early 2017, air conditioning demand skyrocketed. But Adelaide, South Australia is heavily dependent on wind turbines for electricity generation – and there was no wind. Regulators told the local natural gas-fired power plant to ramp up its output, but it couldn’t get enough gas to do so. To avoid a massive, widespread blackout, regulators shut off power to 90,000 homes, leaving angry families sweltering in the dark.

According to the Journal, Aussie politicians and the wind industry, the primary problem was businesses that exported 62% of Australia’s natural gas production in 2016, leaving insufficient supplies to run gas backup power plants that are supposed to step in when wind and solar power fail. Policy makers “didn’t ensure enough gas would remain at home” and couldn’t foresee temperatures soaring with no wind.

Gas export licenses were issued without regard to the consequences for the domestic market,” said one pol. We should have had “a national interest test” in place to ensure domestic gas needs, said another.

During this and other recent Aussie blackouts, valuable fish, meat and produce rotted when freezers and refrigerators shut down. Business operations were interrupted or shut down. Rising electricity prices and unreliable power impacted smelters, factories and other businesses, causing many to lay off workers.

The blackouts and energy crisis “offer lessons for America, as it prepares to vastly increase natural gas shipments abroad,” the Journal advises. It certainly does, though not the lessons suggested by the article or people quoted in it, amid the “excessive exports” narrative. Here are some of the correct lessons.

First and foremost, have debates and red team-blue team exercises. Listen to experts who aren’t locked into climate chaos and renewable energy themes. Foster public discussions, instead of silencing them. Understand the entire situation and all the likely consequences of each alternative, before legislating.

Recognize and study reality. Dead calms occur frequently when temperatures are at their highest, or their lowest – when families, businesses, hospitals and schools need electricity the most. Clouds can blanket regions for days or weeks on end. Reliance on wind and solar is risky, and reliable backup is essential.

The justification for eliminating coal and mandating 50% wind and solar is heavily rooted in fears of catastrophic manmade climate change. But the alleged crisis has no basis in observed evidence. The 18-year pause continues apace, with the El Niño temperature spike of 2015-16 gone … and average global temperatures back down to where they were in March 2015. Hurricanes, tornadoes, floods and droughts are in line with or below multi-century historic trends and fluctuations and are hardly unprecedented. Greenland just recorded its most frigid July temperature reading in history: -33 C (-27 F).

If alarmists have evidence to the contrary, they must present it for review – including original temperature data, not the revised, homogenized data that American, Australian and other scientists have been presenting to support cataclysm claims and justify demands that we eliminate fossil fuels and switch to renewable energy, regardless of the unprecedented energy and economic risks that would pose.

Second, if Australia (or the USA) is to “keep what’s theirs,” instead of exporting it, keeping it in the ground is the wrong way to do it. Exports may be playing a role. But Victoria and New South Wales have banned fracking, more are likely to follow, coal burning and nuclear are also banned – and you cannot export, use or generate electricity with energy that you are prohibited from taking out of the ground. You cannot benefit from resources you hoard and lock up.

Ban fracking, and you ensure more natural gas shortages, soaring electricity prices, ever-greater reliance on expensive, unreliable wind and solar power, more blackouts, more layoffs, more economic downturns and dislocations, more shipping of good jobs overseas. Your may get many new low-pay jobs hauling, installing, maintaining and removing wind turbines and solar panels made in China. But you won’t have smelters, foundries, turbine and panel factories, or the high-pay jobs that go with them.

Adding to the problem, Institute of Public Affairs research director Brett Hogan notes, many coal and gas operators are investing less in maintenance because there is little point in spending on plants that activists and politicians are trying to shut down. “That explains why their reliability is starting to wobble at times, which the renewables crowd falsely claims is proof that fossil fuels are also unstable.”

Meanwhile renewable energy mandates “are pushing out the cheapest electricity provider in Australia (coal), gas prices are being set at the international level, and activists are demanding fracking bans that limit gas supplies and make gas still more expensive,” he adds. The results should be easy to foresee.

Third, applying a “national interest test” should not pertain only to export licenses. It must also apply to fracking and nuclear bans, coal and gas plant closures, and effects of skyrocketing electricity prices on smelters, factories and hospitals, from commitments to climate and renewable energy targets. Australian austerity and sacrifices will have trivial, un-measurable, irrelevant impacts on atmospheric CO2 levels in the face of growing coal use and emissions from China, India, Indonesia, virtually all other Asia-Pacific nations and the rest of the world. How does Australia’s overall national interest stack up against that?

Under sustainability and climate precepts, we are supposed to safeguard the assumed needs of future generations, even if it means ignoring or compromising the undeniable needs of current generations. We are supposed to protect people from theoretical, exaggerated risks of dangerous manmade climate change, regardless of how slashing fossil fuel use impacts millions of businesses and families. That is untenable.

In the midst of all this, the Journal reports, Tesla CEO Elon Musk has offered to build a giant battery system in South Australia – as though batteries can back up wind power for hundreds of thousands of homes and businesses … especially under true sustainability, economic and national interest tests. Mr. Musk, however, needs new customers to offset plunging sales in Hong Kong, Denmark and elsewhere.

Meanwhile, the ECOCITY World Summit is being held in Melbourne. City planners, architects, elected officials, professors, teachers and eager recipients of more taxpayer-funded renewable energy grants are soaking up fake facts and clever strategies for imposing sustainable development goals on the governed classes. As my CFACT colleagues observing the summit put it, they want to use financial instruments and courts to transform communities into “sustainable and resilient cities,” with them in charge.

Al Gore is jetting around the land Down Under, promoting his new climate chaos film and claiming manmade pollution is equivalent to 400,000 Hiroshima atomic bombs going off daily! Australian heat waves are now five times more likely because of manmade global warming! Teachers and journalists get free passes to Gore’s events, to get their propaganda talking points, but no one is allowed to record any part of his talks. When Climate Depot’s Marc Morano offered him a free DVD of the Climate Hustle documentary film, a scowling Al Gore turned and headed to his SUV and private jet.

Mr. Gore and other alarmists are generally panic-stricken about debating climate realists, especially in debates proposed by USEPA Administrator Scott Pruitt. Participating in them would expose their claims to unaccustomed scrutiny, but refusing to do so would leave the impression that they have something to hide: such as their raw data, deceptive methodologies and absence of evidence to support their models.

They should be worried. If the crisis is exaggerated, fabricated or exists only in computer models, we will refuse to keep spending countless billions on junk research and job-killing renewable energy schemes.

Paul Driessen is senior policy analyst for the Committee For A Constructive Tomorrow (www.CFACT.org) and author of Eco-Imperialism: Green power - Black death.