Paul Driessen
|
Posted: Jun 17, 2017 12:01 AM
Share   Tweet
The opinions expressed by columnists are their own and do not necessarily represent the views of Townhall.com. 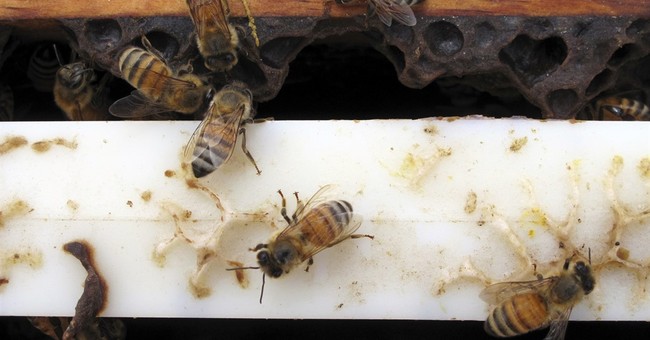 Second Lady Karen Pence and Secretary of Agriculture Sonny Perdue recently teamed up to install a honeybee hive on the grounds of the Vice President’s residence at the Naval Observatory in Washington, DC. This will serve as a “great example” of what people can do to help “reverse the decline” in managed honeybee colonies around the country, the secretary said.

Helping bees and educating people about bee problems is a good idea. However, if the hive is an attempt to reduce media and environmentalist criticism of Trump Administration policies – or put the Pences and Ag Department on the “right” side of the “bee-pocalypse” issue – it will backfire. It will also undermine administration efforts to advance evidence-based science, restore integrity to scientific and regulatory processes, promote safe modern technologies, and support continued crop production and exports.

A steady stream of misinformation has fueled misplaced public anxiety about bees. Being on the “right” side must therefore begin with recognizing that honeybee populations are actually increasing, as the decline in managed honeybee colonies reversed in recent years. Attention to the vice presidential hive should instead focus on preventing and controlling the biggest single threat to honeybees, especially in small-scale hobbyist hives: infestations of Varroa mites.

Anti-pesticide zealots and headline-seeking news media have been talking for years about domesticated bees (and now wild bees) serving as “the canary in the coal mine,” whose health problems portend yet another man-made environmental calamity. The future of agriculture, human nutrition, perhaps all life on Earth could be at risk if bees and other important pollinators “disappear,” they ominously intone.

That is nothing more than fear-mongering. Honeybee populations have been bouncing back nicely since the days when many worried about mysterious large-scale deaths in hives. In fact, the “crisis” was seriously (and sometimes deliberately) overblown, and honeybee populations are now at or near 20-year highs in North America and every other continent, except Antarctica.

Assiduous scientific investigation helped identify the mites, viruses and fungal pathogens that can infest hives, and beekeepers are learning to treat infestations without inadvertently killing bees or entire hives. That process has underscored the hard reality that, for professional and hobbyist beekeepers alike, maintaining healthy hives is complicated and difficult, especially when multiple pathogens invade.

However, in another sense, honeybees truly are canaries in the coal mine. They are harbingers of the ways environmentalist attacks on modern agriculture can damage one of the most productive, competitive and globally vital sectors of the American economy. American agriculture feeds the USA and world, while generating trade surpluses and supporting rural and small town communities across the country.

Unfortunately, determined anti-pesticide zealots have been trying for nearly a decade to use the alleged “bee crisis” to prevent farmers from using advanced-technology neonicotinoid pesticides that boost agricultural yields, reduce the need for other crop-protection insecticides that can harm bees, and reduce risks to humans, birds, other animals, non-pest insects, and bees.

Neonics are now the world’s most widely used pesticide class. They are mainly (some 90%) applied as seed coatings, which lets crops absorb the chemicals into their tissue and allows minuscule amounts to target only pests that feed on and destroy crops. Radical greens have tried for years to blame neonics for higher-than-normal over-winter hive losses, “colony collapse disorder” (in which bees mysteriously abandon their colonies, leaving the queen, food and unhatched eggs behind) and other bee problems.

The mere fact that neonics may be detected in negligible, below-harmful levels in the nectar and pollen of neonic-treated crops, in foliage near neonic-treated cropland, or in the food stored in honeybees hives, has fueled emotional campaigns to ban these crop protection products. The activists simply ignore large-scale field studies that have consistently shown no adverse effects on honeybees at the colony level from field-realistic exposures to neonics. They ignore the fact that bees thrive among and around neonic-treated corn and canola crops in the United States, Canada, Europe, Australia and elsewhere.

Anti-pesticide crusaders are determined to take neonics out of farmers’ pest-control “tool-kits.” They will not let scientific facts stand in their way.

This is the tug-of-war that Mrs. Pence’s beehive has plunged her into. What if her bee colony collapses and dies? Whatever embarrassment this may bring to her skills as a beekeeper (and those of USDA staff who will be charged with keeping the hive alive), activists will claim the bee deaths further confirm that the Trump Administration’s enviro-critics are right – and America’s farmers are wrong.

So what can we learn from the fate of one bee colony on the bucolic grounds of the Naval Observatory in the middle of urban Washington, DC? Potentially plenty – if Mrs. Pence and her USDA aides put on their thinking caps, learn more about “bee issue” realities, use this otherwise empty gesture to dramatize the real issues facing honeybees and their keepers, and help advance the cause of scientific integrity.

In recent weeks, the USDA-supported Bee Informed Partnership at the University of Maryland published its annual survey of honeybee colony losses for 2016-17. Although lower than last year and among the best since the decade-old survey began, over-winter losses of 21% and in-season (summer) losses of 18% are still troublesome numbers. However, a vitally important point must be kept in mind.

Those losses were suffered overwhelmingly by small, backyard, hobbyist beekeepers. (Barely 1% of respondents to the BIP survey are large-scale commercial beekeepers, which skews the survey.) This parallels other studies that show small-scale, hobbyist, backyard beekeepers suffer much higher rates of colony loss than do large-scale professionals, who handle the vast majority of US bees and hives.

Those other studies also show that small-scale beekeepers have the greatest difficulty keeping their bees alive in the face of the scourge of Varroa destructor mites. An epidemic since its 1987 arrival in the USA, this bee parasite is a triple threat. Bee larvae often hatch with Varroa mites already attached to them, and these parasites: (1) suck the bee’s hemolymph blood-equivalent out of them, (2) thereby compromising the bees’ immune systems, and (3)

This has produced a striking paradox – which Mrs. Pence’s new bee colony could help explain. In the wake of widespread publicity about the supposed bee crisis, tens of thousands of well-meaning people across the USA – from the rural countryside to rooftops in densely populated urban areas – have set out to “help the bees” by setting up hobbyist beekeeping operations of one or a few hives. The problem, studies show, is that these well-intentioned initiatives often end up making things worse for honeybees.

Many newly-minted, nature-loving hobbyist beekeepers believe – contrary to the overwhelming bulk of beekeeping literature and practice – that treating their hives chemically for Varroa mites is “against nature,” and thereby hasten the inevitable disaster to their hives. When those hobbyist hives collapse under the weight of uncontrolled or poorly controlled Varroa mites and related diseases, surviving bees migrate in search of new homes, frequently among the healthy hives of some neighboring professional beekeeper – carrying Varroa mites with them. That’s how hobbyist beekeepers inadvertently contribute to the spread of this honeybee epidemic – and to the spread of misinformation about bee losses.

Mrs. Pence’s colony won’t provide lessons on supposed harmful effects on honeybees from exposure to neonic pesticides. The nearest neonic-treated canola and cornfields are well beyond her bees’ roughly 3-mile flight. However, it’s a golden opportunity to use the colony as an object lesson in what small-scale beekeepers should do to keep their hives alive and thriving: above all, control Varroa mites.

Mrs. Pence’s bee colony could become an exemplar for small-scale beekeepers on how to do right by honeybees. By implementing sound beekeeping practices (particularly properly timed Varroa counts and controls), live-streaming those practices and daily hive activity via the bee equivalent of the Panda Cam, and posting short how-to videos, she could teach millions about bees … and advance hobbyist efforts to help bees. That would help replace failure and disappointment with rewarding fun and satisfaction.