Paul Driessen
|
Posted: Oct 08, 2016 12:01 AM
Share   Tweet
The opinions expressed by columnists are their own and do not necessarily represent the views of Townhall.com. 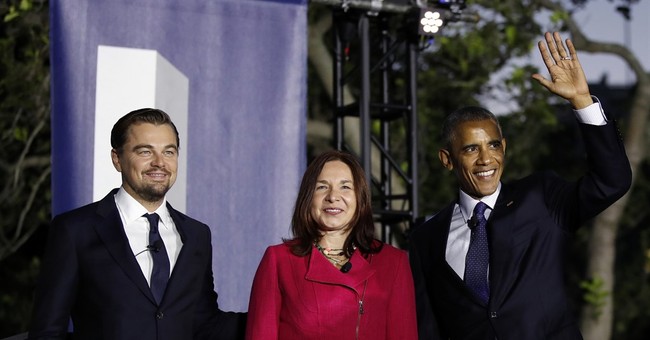 Leonardo DiCaprio made millions for portraying smuggler Danny Archer in the film “Blood Diamond,” which supported mostly unworkable and now defunct efforts to certify that diamonds did not come from “conflict” areas. He loves modern gadgets and takes great pride in being able to lecture “commoners” about safeguarding Earth’s climate – while flying to Earth Day events on private jets, getting chauffeured in limousines, and being driven to Oscar ceremonies in a heavily subsidized Prius.

It turns out, hybrid and electric vehicles are not so “green” and “eco-friendly,” after all. Ditto for cell phones, laptops, wind turbines, solar panels and a plethora of technologies that utilize batteries, magnets and other components which require cobalt, lithium, rare earths and other metals.

Many of those technologies trace their ancestry to mines, mining and processing methods, and countries that don’t come close to meeting modern standards for environmental protection, child labor or “corporate social responsibility.” You could call them “blood technologies” and “conflict metals.”

A recent Washington Post article, “The cobalt pipeline,” attempted to trace the origins of that essential metal from environmentally destructive, even deadly hand-dug mines in the Congo to multiple consumer products. While Todd Frankel’s eye-opening expos

left out many important issues, and addressed others from a simplistic developed-nation perspective, it is a “must read” on modern technologies.

Lithium-ion battery products for which cobalt is indispensable include Post owner Jeff Bezos’ Amazon Kindle, Apple and other cell phones and laptop computers, and BMW, Chevrolet, Ford, Honda, Tesla and Toyota hybrid and electric vehicles. Amounts range from 10 grams in smart phones to 28 g (1 ounce) in laptops to as much as 15,000 g (33 pounds) in electric cars, the article points out.

Some 60% of the world’s entire supply comes from the Democratic Republic of Congo (DRC), Frankel notes, and the vast majority of that (72,000 tons of ore in 2015) moves through one Chinese company (Congo DongFang International Mining) to the world’s largest battery manufacturers and users.

Global cobalt demand has tripled since 2010. But in 2015, US dealers sold only 115,000 electric cars – a 4% decline from the previous year, and a mere 0.7% of the 17.5 million cars and light trucks sold in America. Just imagine how much cobalt ore would be required if all US cars had to be electric, as many politicians and environmentalists demand.

Then imagine the millions of tons of cobalt, lithium, rare earth and other metal ores that would have to be mined – often under similarly unsafe, polluting, environmentally destructive conditions in places like the DRC or Baotou, Inner Mongolia – to manufacture the millions of wind turbines and billions of solar panels that would be required to replace fossil fuels with “eco-friendly renewable” electricity generation in the USA, Europe and elsewhere. Try to envision the vast landscapes that would be impacted.

I estimated that generating intermittent US power would require an area the size of Montana swarming with 400-foot-tall onshore wind turbines. Another analyst calculates that it would affect more land than Montana and North Dakota combined: 141,000,000 acres. Bird and bat-butchering wind turbines would leave some open space in between, but bird-roasting and other solar facilities would blanket vast areas.

And if we eliminate fossil fuel primary and backup power plants, we must store the wind and solar electricity – which means massive battery arrays, which means millions more tons of cobalt and lithium.

Mining experts tell me known locations in the United States contain commercially viable cobalt deposits. My own research (in 1994, before new withdrawals; see pgs 12-17) concluded that virtually all the metals for these and other technologies could be found in US locations that are off limits to exploration and development, under dozens of scenic and environmental categories. We cannot even assess what is there, to make sound policy decisions about whether the full range of technological, ethical, environmental and economic considerations argues for developing them, using modern methods under today’s rigorous regulatory regimes. In fact, even when deposits are still legally accessible, getting permits to evaluate and mine them is increasingly impossible. Mining thus heads overseas, because even the most ardent environmentalists, regulators and politicians refuse to live without their technological marvels.

Western mining companies could mine those overseas deposits under rules and processes that safeguard worker health and environmental values. But they are too often vilified, harassed and kept out, by ardent environmentalists, regulators and politicians. The vacuum is filled by Chinese and other companies, under far less rigorous health, safety and environmental standards.

Or worse, it is filled by tens of thousands of poor “artisanal” miners, who dig holes and mine shafts with hand tools – under few or no health, safety or environmental standards or precautions, and often without permits – to eke out a few dollars a day, to feed and clothe their families. The dangerous, back-breaking work often becomes a family enterprise – with wives and children laboring alongside fathers, and all of them getting covered in heavy metal dust, even bringing it home to infect babies and young children.

The result is high levels of cobalt, lead and uranium in their blood, urine and organs – and multiple blood and respiratory diseases, as well as birth defects. The risk of serious accidents and death in the mines is acute and constant. Frankel and others rightly bemoan the situation. However, the all too real alternatives are prostitution for mothers and daughters, thievery for fathers and sons, or starvation and death for all.

Near and mid-term solutions are elusive in countries as destitute and dysfunctional as the DRC. They are made even more distant by the same “social responsibility” and “environmental” activists who gain fame and fortune by battling Western mining companies.

When Doe Run launched extensive projects to modernize and clean up a decades-long heritage of horrendous state-run lead and silver mines and smelters in Peru, those activists finally spoke up – to denounce the company for not eliminating the problems overnight. In the same vein, Chinese-run mining operations are an improvement over artisanal mines, but China’s health, environmental and human rights record in Baotou, Beijing, Guangdong and elsewhere presents little reason for optimism.

Moreover, the 100,000 or so artisanal miners in Congo mean the companies don’t have to pay wages or worry about health-safety-pollution compliance. That brings cheaper cobalt, which benefits mining, processing, battery, computer and car companies – and the labyrinthine acquisition process makes it all but impossible to trace the origins of a particular pound of chromium.

Artisanal and even modern corporate underground mines are inherently dangerous and deadly. However, global greens detest open pit mining, despite its far lower risks. Forced relocations of families and communities are always wrenching, as Frankel observes – whether for cobalt mines or for TVA projects, China’s Three Gorges Dam, Ugandan climate programs, or anti-logging campaigns that closed down many communities’ economic foundations.

The questions now are: Where and how to begin cleaning up the mess, with what money in this destitute and often war-torn region, and how to replace or improve DongFang, or attract Western companies that can weather callous, hypocritical vilification campaigns by the $15-billion-a year Big Green cabal?

These are the same eco-imperialist pressure groups that oppose drilling, fracking, and fossil fuels, even if they would lift families out of abject poverty; pipelines and train lines to carry oil, because they demand a hydrocarbon-free future; DDT and pesticides to prevent malaria; and Golden Rice and other GMO crops to reduce malnutrition, starvation, poverty, blindness and death. They support only minimal economic development in Third World countries, and only what can be supported by wind and solar power.

Above all, they ensure unsustainable, unconscionable poverty, disease and death in poor nations.

All of this should begin to open people’s eyes, redefine what is “green” energy and technology, and engender robust debate over what really is ethical, Earth-friendly, socially responsible, environmental justice and eco-racism. Whether that will actually happen remains to be seen.