Paul Driessen
|
Posted: Oct 01, 2016 12:01 AM
Share   Tweet
The opinions expressed by columnists are their own and do not necessarily represent the views of Townhall.com. 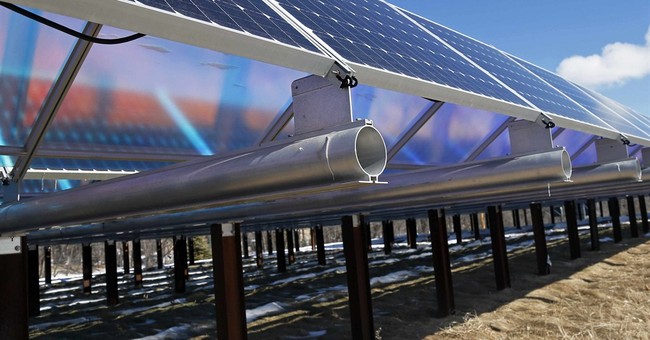 In reality, Obama era economic growth has been an anemic 1-2% annually. More than 93 million working-age Americans are still not working, and over 6 million are working part-time, because their hours have been cut back or they cannot find full-time positions. We’re creating jobs by turning four high-pay full-time jobs with good benefits into six lower-pay part-time positions with few or no benefits. Average middle class family incomes are still lower than in 2007.

Hillary Clinton and the Democrats would expand these policies and the harm they cause.

America could become “the clean-energy superpower of the twenty-first century,” Mrs. Clinton said during the debate. “We can deploy a half-billion more solar panels. We can have enough clean energy to power every home. That’s a lot of jobs, a lot of new economic activity.”

The “climate emergency,” the Democratic Party Platform (DPP) intones, is an “urgent threat” that demands immediate “ambitious investments” in new “green” energy systems. America must slash greenhouse gas emissions by 80% below 2005 levels by 2050; get half of all US electricity from renewable sources by 2027; and ensure that the nation runs “entirely on clean energy by mid-century.”

The DPP also supports impeding or rejecting oil and gas leasing, drilling, fracking and pipelines, as well as gas-fired power plants – while accelerating and incentivizing wind and solar installations and transmission lines. It says America should “lead the fight against climate change,” locally and globally.

Meanwhile, Mrs. Clinton has said she would stringently regulate hydraulic fracturing, banning oil and gas extraction from public lands is a “done deal,” and her party is “going to put a lot of coal miners and coal companies out of business.” (But it will re-train miners and fund their pensions with taxes and red ink.)

In short, Democrats support a government mandated and regulated energy system that would require constant infusions of taxpayer and consumer subsidies via grants, loans, feed-in tariffs and crony-corporatist arrangements. It will oppose fossil fuels that provide reliable, affordable energy – and generate tens of billions of dollars a year in lease bonuses, royalties, and corporate and personal taxes.

The Democrat policies are green pixie dust. They will never generate the energy and revenues required to put America back to work and rebuild our aging, broken infrastructure. And they ignore what developing countries are doing at a feverish pace: producing, buying and burning coal, oil and natural gas, to lift billions out of poverty and bring them modern living standards. But the Democrat Party faithful apparently believe repeating platform mantras often enough will make them come true.

Many poor countries signed the Paris climate treaty. But they did so (a) to share in the trillions of dollars they expect currently rich nations to give them for climate change adaptation, mitigation and reparation; and (b) because developing nations are not required to reduce fossil fuel use or greenhouse gas emissions.

That means America may slash its plant-fertilizing carbon dioxide emissions, make its energy costs skyrocket and become noncompetitive in the international arena – but developing countries will emit 100 times what we painfully reduce. That is not the “leadership” that any sane country would provide.

Chinese President Xi Jinping and President Obama unilaterally ratified the Paris climate treaty on September 3. Barely three weeks later, China said it can no longer afford current levels of wind and solar subsidies, and so is sharply reducing renewable power generation. Instead, it plans to increase its thermal coal production by 182 million tons per year. Meanwhile Chinese banks and construction companies are financing and building hundreds of new coal-fired generating units in Indonesia, Pakistan, Turkey, Africa, Latin America and beyond – including nearly two dozen in the Balkans.

India has become “the center of the world’s oil demand growth,” says Citigroup. Its economy will likely expand by 8% per year through 2021, its domestic coal production even faster, and coal demand for factories and electricity generation is rising so rapidly that India is financing a major coal mining operation in Mozambique.

Southeast Asian fossil fuel consumption is expected to double by 2040, to 1,070 million tons of oil equivalent per year. Oil, gas and coal will then represent 78% of the region’s energy mix, up from 74% today. Philippines President Rodrigo Duterte again criticized Western powers for their “hypocrisy” in trying to restrict poor country development on the grounds of CO2 emissions and climate change.

Japan has joined this Asian bloc. Instead of reopening nuclear power plants or expanding renewable power generation, it is using coal and natural gas for 75% of its power, compared to 54% in 2011.

Meanwhile, Mr. Obama’s “Power Africa” initiative has been a dismal failure. He had promised in 2013 that the USA would bring the continent “more than 10,000 megawatts of cleaner, more efficient” renewable electricity. (By comparison, total US generating capacity is 1,069,000 MW.) So far, the project has provided less than 400 MW – 4% of what was promised, and 0.04% of US capacity.

As to getting all US energy from “clean, renewable” sources by 2050, that is a ridiculous pipe dream.

The United States currently plants corn on an area the size of Iowa, to produce ethanol that accounts for 10% of its gasoline fuel blend. Replacing 100% of US gasoline and diesel with corn ethanol would require cropland the size of Texas, Oklahoma, Kansas, Colorado and New Mexico combined! Plus massive amounts of water, fertilizer, pesticides, tractor and truck fuel, and electricity for distilleries.

The USA now generates a measly 4% of its electricity from 49,000 wind turbines. Assuming 75 acres per megawatt, those turbines tower over lands the size of Connecticut. Generating all US electricity with wind would require more than 710,000 monstrous 400-foot-tall 1.5 MW turbines across 93 million acres – an area the size of Montana!

It would also require thousands of miles of new transmission lines – crossing state and private lands via eminent domain and “streamlined” federal permitting processes. Of course, all those turbines and lines would require billions of tons of concrete, steel, copper, fiberglass, rare earth metals and other raw materials … plus land and energy for mining, production and installation … to produce electricity 15-20% of the time, so that we get electrical power when it’s available, instead of when we need it.

And meanwhile turbine blades moving 180 mph at their tips will slice and dice millions of eagles, hawks and other birds and bats, from local habitats and even from nesting areas 100 miles from the turbines.

Put bluntly, Hillary Clinton and the Democratic Party are trying to impose an energy – and economic – system that is totally and utterly unsustainable. It would bankrupt the nation, leave millions more jobless and homeless, impair human health and environmental quality, and bring no global CO2 reductions.

It’s time we had some grownup thinking and policies, instead of pixie dust.