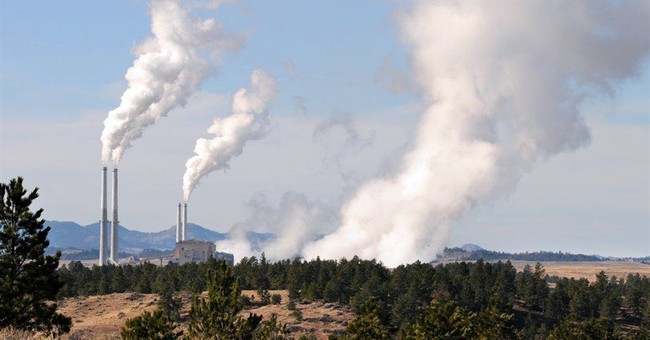 Paris climate talks this week descended into madcap all-night negotiations, as delegates desperately tried to salvage some kind of agreement beyond mere pledges to do something sometime (soon) about what President Obama insists is the gravest threat to our planet, national security and future generations.

He gets far more energized about slashing energy use than about Islamist terrorism, even after the Paris and San Bernardino butchery. Determined for once to lead from upfront, he took a 500-person greenhouse gas-spewing entourage to the City of Light, and personally called Prime Minister Modi to discuss India’s and America’s shared responsibility for preventing increasingly severe droughts, floods, storms, island-swallowing rising acidic ocean levels and other disasters conjured up by alarmist computer models.

Legally binding carbon dioxide emission targets were too contentious to pursue. So was modifying the concept of differentiated responsibilities, which holds that countries that historically caused most of the carbon dioxide build-up in the atmosphere must lead in cutting their emissions, while helping developing countries eventually do likewise, by giving them trillions of dollars in cash and free technology.

Although China now emits far more CO2 and other greenhouse gases (GHG) than the USA or EU, it refused to fast-track reducing those emissions. It will only agree to do its best to begin the process around 2030. China and wealthy petro-states also oppose suggestions that they should pay into the $100-billion-per-year Green Climate Fund for supposed adaptation, mitigation and compensation.

That left three major bones of contention, and who knows what meaningful agreement can be reached on any of them. (1) Actually getting rich nations to contribute more than spare change to the Climate Fund. (2) Persuading developing nations to allow transparent reviews of their progress in meeting their voluntary emission targets. (3) Revising those targets on a regular basis, presumably always tightening them, even if real-world evidence further demonstrates that CO2 is not actually causing climate chaos.

Of course, the entire climate cataclysm mantra is based on the claim that carbon dioxide has replaced the solar and other powerful natural forces that have driven climate change throughout Earth and human history. Now, merely tweaking CO2 emissions will supposedly stabilize climate and weather systems.

President Obama fervently believes this. He is determined to sign whatever is devised in Paris, call it morally binding, and implement still more emission reduction mandates in the United States, even though a majority in Congress and the states oppose his anti-fossil fuel programs, because of their adverse effects on jobs and living standards, especially for poor, working class and minority families.

The impacts would be far worse than many news stories and White House press releases suggest. Those sources often say the proposed climate treaty and other actions seek GHG reductions of 80% below predicted 2050 emission levels. The real original Paris treaty target is 80% below actual 1990 levels.

That means the world would have to eliminate 96% of the greenhouse gases that all humanity would likely release if we reach world population levels, economic growth and living standards predicted for 2050. The United States would likewise have to make drastic additional CO2 and GHG reductions.

Moreover, current 2050 forecasts already assume and incorporate significant energy efficiency, de-carbonization and de-industrialization over the next 35 years. They are not business-as-usual numbers or extrapolations of past trends. Further CO2 reductions beyond those already incorporated into the forecasts would thus be increasingly difficult, expensive, and indeed impossible to achieve.

As we explain in a MasterResource.org analysis, there is a strong positive relationship between GDP and carbon-based energy consumption. Slashing fossil energy use that far would thus require decimating economic growth, job creation and preservation, and average per-person incomes. In fact, average world per capita GDP would plummet from a projected $30,600 in 2050 to a miserly $1,200 per year.

Average per capita GDP in 2050 would be less than what Americans had in 1830! Many futuristic technologies would still exist, but only wealthy families and ruling elites could afford them.

That would be catastrophic for jobs, health and welfare in developed countries – and lethal to millions in poor nations, who would be denied the blessings of electricity and fossil fuels for decades to come. That is indefensible, inhumane and immoral. And for what?

Mr. Obama and the alarmists in Paris insist that drastic GHG reductions will hold global temperature increases to 2 degrees Celsius (3.5 F) and prevent climate and weather disasters. Some even claim now that the upper safety limit is actually 1.5 degrees C (2.7 F), which would require even more draconian energy and emission cutbacks. Otherwise, Earth could become uninhabitable, they claim. Nonsense.

In the Real World, climate changes regularly, and recent climate and weather trends and events are in line with historic experience. In fact, average global temperatures haven’t risen in nearly two decades; no category 3-5 hurricane has struck the USA in a record ten years; Greenland and Antarctic ice are at record levels; and still firmly alkaline sea levels (8.1 pH) are rising at barely seven inches per century.

Many scientists believe the sun and other powerful natural forces may soon usher in a new era of colder temperatures, regardless of whether atmospheric CO2 rises above 0.04% (400 ppm). That would pose much greater threats to human health, agriculture and prosperity (and wildlife) than global warming.

We must never forget: Fossil fuels facilitated successive industrial revolutions and enabled billions to live better than royalty did a century ago, helped average incomes to increase eleven-fold, and helped average global life expectancy to soar from less than 30 in 1870 to 71 today.

Carbon-based energy still provides 81% of world energy, and supports $70 trillion per year in world GDP. It will supply 75-80% of global energy for decades to come, Energy Information Administration, International Energy Agency and other studies forecast. Carbon-based energy is essential if we are to bring electricity to the 1.3 billion people who still do not have it, and end the rampant poverty and lung, intestinal and other diseases that kill millions of people in poor countries every year.

Furthermore, thousands of coal-fired power plants are built, under construction or in planning around the world. China and India will not consider reducing GHG emissions until 2030, and even then it will be voluntary and dependent on how their economies are doing. That means atmospheric carbon dioxide levels will continue to climb, greening the planet and spurring faster crop, forest and grassland growth.

President Obama and the 40,000 climate alarmists gathered in Paris largely ignored these inconvenient realities, and whitewash the adverse consequences of anti-hydrocarbon policies. What’s being discussed in Paris, the White House and EPA would have minimal health, climate or environmental benefits.

Instead, it would have horrendous adverse effects on human health and environmental quality, while doing nothing to prevent climate change or extreme weather events. It would let unelected, unaccountable activists and bureaucrats decide which industries, companies, workers, families, states and countries win the Climate Hustle game, and which ones lose.

Obligating the United States to slash its fossil fuel use, and send billions of taxpayer dollars annually to dictators, bureaucrats and crony industrialists in poor countries would be disastrous. It must not happen.