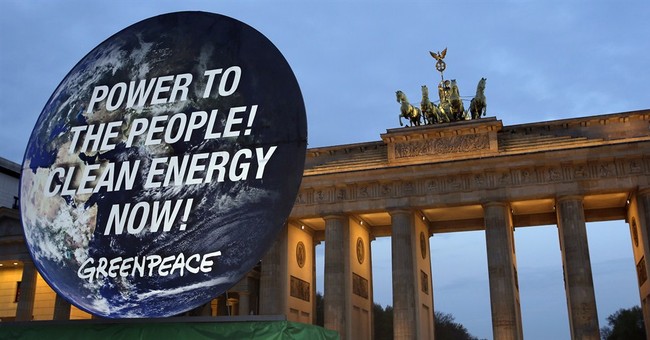 Meanwhile, the WWF ($927 million in 2013 global income) filed a formal complaint against Peabody Energy for “misleading readers” in advertisements that say coal-based electricity can improve lives in developing countries. The ads are not “decent, honest and veracious,” as required by Belgian law, the World Wildlife ethicists sniffed. Other non-governmental organizations (NGOs) make similar demands.

These are novel tactics. But the entire exercise might be little more than a clever attempt to distract people from developments that could create problems for thus far unaccountable Big Green organizations.

I don’t mean Greenpeace International’s $5.2 million loss a couple weeks ago, when a rogue employee (since fired) used company cash to conduct unauthorized trades on global currency markets. Other recent events portend far rougher legal and political waters ahead for radical eco-activists, especially if countries and companies take a few more pages out of the Big Green playbook.

India’s Intelligence Bureau recently identified Greenpeace as “a threat to national economic security,” noting that these and other groups have been “spawning” and funding internal protest movements and campaigns that have delayed or blocked numerous mines, electricity projects and other infrastructure programs vitally needed to create jobs and lift people out of poverty and disease. The anti-development NGOs are costing India’s economy 2-3% in lost GDP every year, the Bureau estimates.

The Indian government has now banned direct foreign funding of local campaign groups by foreign NGOs like Greenpeace, the WWF and US-based Center for Media and Democracy. India and other nations could do much more. Simply holding these über-wealthy nonprofit environmentalist corporations to the same ethical standards they demand of for-profit corporations could be a fascinating start.

Greenpeace, WWF and other Big Green campaigners constantly demand environmental and climate justice for poor families. They insist that for-profit corporations be socially responsible, honest, transparent, accountable, and liable for damages and injustices that the NGOs allege the companies have committed, by supposedly altering Earth’s climate and weather, for example.

Meanwhile, more than 300 million Indians (equal to the US population) still have no access to electricity, or only sporadic access. 700 million Africans likewise have no or only occasional access. Worldwide, almost 2.5 billion people (nearly a third of our Earth’s population) still lack electricity or must rely on little solar panels on their huts, a single wind turbine in their village or terribly unreliable networks, to charge a cell phone and power a few light bulbs or a tiny refrigerator.

These energy-deprived people do not merely suffer abject poverty. They must burn wood and dung for heating and cooking, which results in debilitating lung diseases that kill a million people every year. They lack refrigeration, safe water and decent hospitals, resulting in virulent intestinal diseases that send almost two million people to their graves annually. The vast majority of these victims are women and children.

The energy deprivation is due in large part to unrelenting, aggressive, deceitful eco-activist campaigns against coal-fired power plants, natural gas-fueled turbines, and nuclear and hydroelectric facilities in India, Ghana, South Africa, Uganda and elsewhere. The Obama Administration joined Big Greeen in refusing to support loans for these critically needed projects, citing climate change and other claims.

As American University adjunct professor Caleb Rossiter asked in a recent Wall Street Journal article, “Where is the justice when the U.S. discourages World Bank funding for electricity-generation projects in Africa that involve fossil fuels, and when the European Union places a ‘global warming’ tax on cargo flights importing perishable African goods?”

Where is the justice in Obama advisor John Holdren saying ultra-green elites in rich countries should define and dictate “ecologically feasible development” for poor countries? As the Indian government said in banning foreign NGO funding of anti-development groups, poor nations have “a right to grow.”

Imagine your life without abundant, reliable, affordable electricity and transportation fuels. Imagine living under conditions endured by impoverished, malnourished, diseased Indians and Africans whose life expectancy is 49 to 59 years. And then dare to object to their pleas and aspirations, especially on the basis of “dangerous manmade global warming” speculation and GIGO computer models. Real pollution from modern coal-fired power plants (particulates, sulfates, nitrates and so on) is a tiny fraction of what they emitted 40 years ago – and far less harmful than pollutants from zero-electricity wood fires.

Big Green activists say anything other than solar panels and bird-butchering wind turbines would not be “sustainable.” Like climate change, “sustainability” is infinitely elastic and malleable, making it a perfect weapon for anti-development activists. Whatever they support is sustainable. Whatever they oppose is unsustainable. To them, apparently, the diseases and death tolls are sustainable, just, ethical and moral.

Whatever they advocate also complies with the “precautionary principle.” Whatever they disdain violates it. Worse, their perverse guideline always focuses on the risks of using technologies – but never on the risks of not using them. It spotlights risks that a technology – coal-fired power plants, biotech foods or DDT, for example – might cause, but ignores risks the technology would reduce or prevent.

Genetically engineered Golden Rice incorporates a gene from corn (maize) to make it rich in beta-carotene, which humans can convert to Vitamin A, to prevent blindness and save lives. The rice would be made available at no cost to poor farmers. Just two ounces a day would virtually end the childhood malnutrition, blindness and deaths. But Greenpeace and its “ethical” collaborators have battled Golden Rice for years, while eight million children died from Vitamin A deficiency since the rice was invented.

In Uganda malnourished people depend as heavily on Vitamin A-deficient bananas, as their Asian counterparts do on minimally nutritious rice. A new banana incorporates genes from wild bananas, to boost the fruit’s Vitamin A levels tenfold. But anti-biotechnology activists repeatedly pressure legislators not to approve biotech crops for sale. Other crops are genetically engineered to resist insects, drought and diseases, reducing the need for pesticides and allowing farmers to grow more food on less land with less water. However, Big Green opposes them too, while millions die from malnutrition and starvation.

Sprayed in tiny amounts on walls of homes, DDT repels mosquitoes for six months or more. It kills any that land on the walls and irritates those it does not kill or repel, so they leave the house without biting anyone. No other chemical – at any price – can do all that. Where DDT and other insecticides are used, malaria cases and deaths plummet – by as much as 80 percent. Used this way, the chemical is safe for humans and animals, and malaria-carrying mosquitoes are far less likely to build immunities to DDT than to other pesticides, which are still used heavily in agriculture and do pose risks to humans.

But in another crime against humanity, Greenpeace, WWF and their ilk constantly battle DDT use – while half a billion people get malaria every year, making them unable to work for weeks on end, leaving millions with permanent brain damage, and killing a million people per year, mostly women and children.

India and other countries can fight back, by terminating the NGOs’ tax-exempt status, as Canada did with Greenpeace. They could hold the pressure groups to the same standards they demand of for-profit corporations: honesty, transparency, social responsibility, accountability and personal liability. They could excoriate the Big Green groups for their crimes against humanity – and penalize them for the malnutrition, disease, economic retractions and deaths they perpetrate or perpetuate.

Actions like these would improve people’s lives and make Big Green at least somewhat accountable.