Judge Sotomayor and the Second Amendment 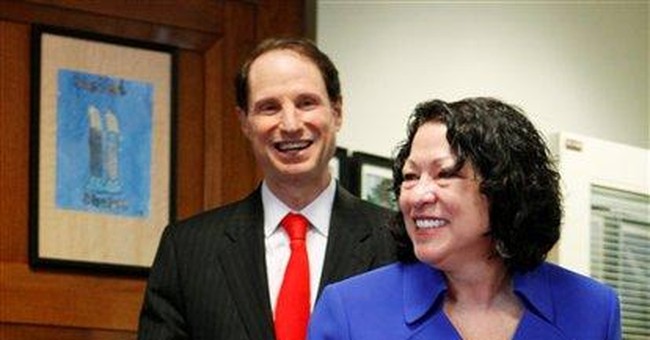 Recently, as citizens across America were learning about Judge Sotomayor’s troubling Second Amendment rulings, a new story broke that increased concerns. The 7th Circuit Court of Appeals has ruled to uphold a Chicago law banning handguns and automatic weapons within city limits. This is exactly the type of ruling Judge Sotomayor uphold as she was one of three federal appellate judges to say that an individual’s rights, guaranteed by the Second Amendment, does not apply to states.

If confirmed by the U.S. Senate, Judge Sotomayor will likely be on the Supreme Court while a potentially groundbreaking Second Amendment case is decided. Constitutional scholars, gun owners and freedom loving Americans will once again find themselves on pins and needles.

For months now, the rights of gun owners all across this country have been in limbo as they experienced the fluid ups and downs of federal court opinions. At times they saw their individual rights eroding away under the weight of anti-gun activists who would impose personal views in place of the plain language of the 2nd Amendment. At other moments, it seemed the activists would be defeated by cases like District of Columbia v. Heller and individual rights would prevail.

In fact, over two hundred years ago – the author of the Declaration of Independence - President Thomas Jefferson, had many of the same concerns as he sat down to write a letter to his friend Wilson Cary Nicholas. Jefferson wrote, “Our peculiar security is in possession of a written Constitution. Let us not make it a blank paper by construction."

Thomas Jefferson knew then, with fresh memories of a bloody struggle for independence, what many gun-owners have come to learn today: liberty is a fragile gift which is always worth fighting for. That’s why I have applauded cases such as Heller while remaining vigilant against activists who would have the District of Columbia find new ways around the Heller ruling, and support the 7th Circuit Court’s search for new precedents.

Some of these activists will no doubt remark that since two of the three 7th Circuit Judges were appointed by President Reagan, their opinions shouldn’t be questioned by conservatives. But I strongly disagree with this line of reasoning since the right to bear arms is not only important to Americans who use guns for recreation and hunting, but also to those who wish to use their Constitutional right to protect themselves in their own homes. I strongly support the right of the people to keep and bear arms—for hunting, recreation, protection, or for any other legal purpose they may choose—and assure you I will continue to do all I can to protect this fundamental right.

I also disagree with the 7th Circuit’s reasoning that their ruling is upheld by the precedent of Presser v. Illinois (1885). That majority opinion did say that the Second Amendment only applies directly to the federal government, but it also states that “the States cannot prohibit the people from keeping and bearing arms, so as to deprive the United States of their rightful resource for maintaining the public security” or restrict their “privileges and immunities as citizens of the United States.”

For these reasons and many more, I will continue to fight for Second Amendment rights, for those citizens whose rights are in legal limbo, and against the activists who repeatedly work to give us a “blank” Constitution to be reconstructed at will by whoever sits on the federal bench.