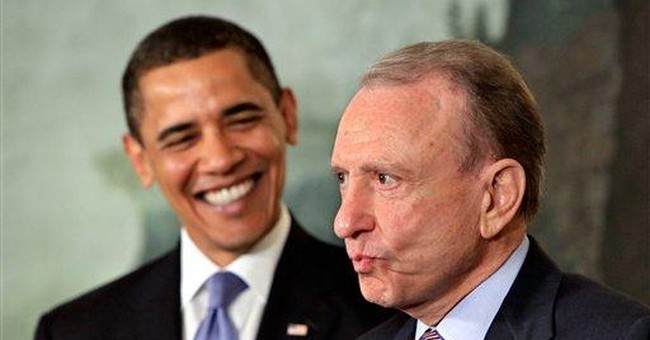 If there is one thing to be learned from the debate over President Barack Obama’s $789 billion stimulus bill, it is that calling legislation a “compromise” does not actually make it a compromise. Of course, that doesn’t stop Republican Sens. Arlen Specter, Pa., Olympia Snowe, Maine, and Susan Collins, Maine, from running around town calling it as much.

In mid-February, these three “moderate” Republicans joined with their Democratic colleagues in pushing Obama’s stimulus package through Congress. While they touted the bill as a compromise, the final version changed little from the original.

Defending his support for the bill, Specter cited President John Kennedy, who used to say, “In politics, nobody gets everything, nobody gets nothing and everybody gets something.” But the final stimulus bill did not fit Kennedy’s description of a compromise. Looking at the final bill, one has to ask: What did Democrats sacrifice? And what did Republicans get? Most importantly, what are the American taxpayers who will be footing this bill receiving in the alleged negotiation process?

The answer: not much. The bill Obama signed to the “oohs” and “ahhs” of the adoring media remains as fundamentally fl awed as the preceding versions. While Congress shaved off several billion dollars in conference, $789 billion is still a hefty price tag, especially when the country is already burdened by $10.8 trillion in national debt. Like the House and Senate bills, the final bill was stuffed with wasteful projects that don’t have anything to do with stimulating the economy and with programs to further the Democrats’ welfare wish list. White House Chief of Staff Rahm Emanuel admitted as much. Early in the stimulus debate, he said, “You never want a serious crisis to go to waste. And what I mean by that is an opportunity to do things you think you could not do before.”

Nor are the tax cuts in the stimulus the kind of pro-growth tax cuts the country’s economy needs right now. Instead of cutting marginal income tax rates or corporate taxes to encourage production and work, the stimulus provides tax credits. To add insult to injury, some of these credits are not even tax cuts at all. They are refundable tax cuts—checks cut to people who don’t pay federal income taxes. There’s a word for that in the dictionary, and it’s not tax cuts. It’s called spending.

In the end, the support from the three “moderates” was crucial to passing the stimulus bill. Because of Sen. Ted Kennedy’s absence, the GOP needed only one more Senate vote to mount a sustainable filibuster. Had even one of the apostates stood strong, Republicans would have been able to fashion a genuine compromise bill.

After all, without the votes in the Senate, President Obama and congressional Democrats would have been forced to go back to the drawing board and actually listen to Republicans. A true compromise would have certainly included plenty of wasteful spending, but it would have also included tax cuts that would actually help our economic recovery. Instead, Specter, Snowe and Collins snatched defeat from the jaws of victory.

Republicans might be in the minority, but that doesn’t mean they have to be completely powerless. It doesn’t mean they have to relinquish the country’s economy to a left-wing agenda. But in order to protect American taxpayers, Republican leadership in the Senate will have to make sure the so-called moderates don’t wander off the reservation every time Senate Majority Leader Harry Reid, D-Nev., comes calling.

The stimulus bill was only the first test of the Republican unity in Congress. President Obama has since announced a bailout of the housing industry and is already talking about the prospect of a second stimulus bill. We also have “card check” and cap-and trade legislation to look forward to in the coming months. And don’t forget Obama’s big plans to remake our health care system in Europe’s image.

The Republican Party’s ability to mount a filibuster is its only weapon in seeking true compromises with the Obama administration. Throughout the campaign trail, the president talked about bipartisanship and change. The Republican Party cannot suffer defectors if it wants to make Obama live up to his campaign pledges.

If the GOP cannot unite, then the stimulus bill will not be the only defeat Republicans will snatch away from the Democrats.