Patrick Hedger
|
Posted: Dec 16, 2020 10:52 AM
Share   Tweet
The opinions expressed by columnists are their own and do not necessarily represent the views of Townhall.com. 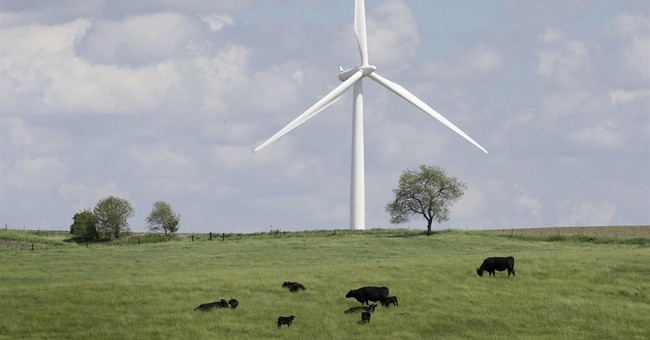 Famed Chicago School economist and Nobel Prize winner Milton Friedman often said, “There is nothing so permanent as a temporary government program.” Each year, when it comes time to pass an omnibus spending bill, taxpayers get a firsthand view of just how prophetic Friedman’s words were. This year is no different as Congress negotiates end-of-year spending and a potential COVID relief package. Programs and subsidies that should have gone by the wayside years ago once again find themselves squarely on the table.

Such is the case with the production tax credit (PTC) and investment tax credit (ITC) for both the wind and solar industries. The American taxpayer has been burdened enough by the rampant spending of the past year combatting the coronavirus and the deleterious effects of the associated lockdowns. Both the PTCs and ITCs for these industries – that have long since become mature enough to stand on their own – are sad testaments to government waste.

Another troubling provision would potentially mandate 100 percent renewable power. According to the American Energy Alliance, “The word on the street is that there are negotiations taking place to try and jam a pre-negotiated energy bill into the year-end spending bonanza. AEA obtained a page from the discussion draft that appears to include a provision from the House Green New Deal lite version of energy legislation, H.R. 4447, making is a ‘Sense of Congress’ that calls for 100% of power demand to come from ‘clean, renewable, or zero-emission’ energy sources.”  This type of mandate would open the floodgates of taxpayer subsidies and raise energy costs.

Wind and solar subsidies are already estimated to cost American taxpayers a shade over $60 billion in just this decade alone. Extending these wasteful tax credits would add another $13 to $19 billion to that tally. Given that the United States is facing debt and deficit numbers never before seen in the nation’s history, the refusal of Congress to reject these extensions outright is patently absurd.

Not only is Congress’s profligate spending absurd, it is also thoroughly unnecessary in this case. These subsidies have been in place since 1992. Since 2010, the cost of onshore wind has dropped 40 percent and solar has dropped a staggering 80 percent. If, at this point, neither industry can stand on its own two feet without the ITC and PTC given to them by the federal government – and thus the American taxpayer – perhaps it’s time to re-evaluate them as viable energy sources moving forward.

Congress initially intended for the ITC and PTC to expire in 1999, a mere seven years after their debut. However, they have since been extended on 12 separate occasions. This year’s omnibus would mark the 13th such extension if allowed to go forward. This present extension would be particularly unnecessary given that even the industries involved have admitted to some extent that they no longer need these tax credits.

Last year, the Vice President of Federal Affairs for the American Wind Energy Association (AWEA) announced he would no longer be advocating for “wind-specific incentives” in the year-end package. Sadly, he changed his tune and decided to renew his call for wind tax credits ostensibly to compete with the solar industry. Ironically enough, the solar tax credits were not extended that year.

The solar industry continues to thrive without the tax credits, for the time being. In 2019, it became “the number one source of new electric generating capacity installed in the United States, representing 40% of all new capacity installed. Over the last 10 years, solar deployment has grown an average of 48% every year.” The same holds true for the wind industry. It has tripled in size and is expected to continue to grow even if the tax credits are phased out.

To be clear, the emergence of alternatives to traditional energy sources should be applauded. All honest lovers of the free market enjoy healthy competition for services. If wind and solar can finally stand on their own two feet, it will make the market for electricity and energy a far more vibrant one. However, free marketeers also know that no marketplace can be truly free if the government constantly has its thumbs on the proverbial scales.

Taxpayers should also be concerned with proposed language seeking to mandate the use of wind and solar. The decades of Congress reapproving PTCs and ITCs for these technologies have proven that our elected officials are bad at predicting the future. Boxing ourselves into a corner with mandates for today’s technology serves to only limit our options in terms of reducing emissions going forward.

These tax credits no longer represent a key lifeline for emerging alternative sources of energy. Instead, they have become just another form of government cronyism and – like most other forms of cronyism – crawl out into the limelight to get mindlessly shepherded through the halls of Congress without anyone second guessing the necessity of it. Let 2020 finally be the year that these programs are allowed to expire as they should have over 20 years ago.

Patrick Hedger is the Vice President of Policy for the Taxpayers Protection Alliance.