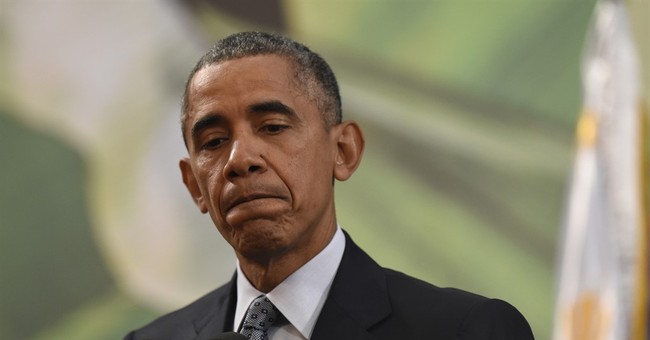 Trending
In denouncing Republicans as "scared of widows and orphans," and castigating those who prefer Christian refugees to Muslims coming to America, Barack Obama has come off as petulant and unpresidential.

Clearly, he is upset. And with good reason.

He grossly, transparently underestimated the ability of ISIS, the "JV" team, to strike outside the caliphate into the heart of the West, and has egg all over his face. More critically, the liberal world order he has been preaching and predicting is receding before our eyes.

Suddenly, his rhetoric is discordantly out of touch with reality. And, for his time on the global stage, the phrase "failed president" comes to mind.

What happened in Paris, said President Obama, "was an attack on all of humanity and the universal values that we share."

At a soccer game between Turkey and Greece in Istanbul, Turks booed during the moment of silence for the Paris dead and chanted "Allahu Akbar." Among 1.6 billion Muslims, hundreds of millions do not share our values regarding women's rights, abortion, homosexuality, free speech, or the equality of all religious faiths.

Set aside the fanatics of ISIS. Does Saudi Arabia share Obama's views and values regarding sexual freedom and the equality of Christianity, Judaism and Islam? Is anything like the First Amendment operative across the Sunni or Shiite world, or in China?

In their belief in the innate superiority of their Islamic faith and the culture and civilization it created, Muslims have more in common with our confident Christian ancestors who conquered them than with gauzy global egalitarians like Barack Obama.

"Liberte, egalite, fraternite" the values of secular France, are no more shared by the Islamic world than is France's affection for Charlie Hebdo.

Across both Europe and the United States, the lurch away from liberalism, on immigration, borders and security, fairly astonishes.

But again, understandably so.

Many of the Muslim immigrants in Britain, France and Germany have never assimilated. Within these countries are huge enclaves of the alienated and their militant offspring.

Consider the Belgium capital of Brussels. Belgium's home affairs minister Jan Jambon said his government does not "have control of the situation in Molenbeek."

Brice De Ruyver, a security adviser to a former Belgian prime minister says, "We don't officially have no-go zones in Brussels, but in reality, there are, and they are in Molenbeek."

According to The Wall Street Journal, after the Paris attacks, "French security forces ... conducted hundreds of antiterror raids and placed more than 100 suspects under arrest. ... France has some 11,500 names on government watch lists."

How many of those 11,500 are of Arab descent or the Muslim faith?

The nations of the EU are beginning to look again at their borders, and who is crossing them, who is coming in, and who is already there.

And the world is reawakening to truths long suppressed. Race and religion matter. To some they are life-and-death matters. Not all creeds, cultures and tribes are equally or easily assimilated into a Western nation. And First World nations have a right to preserve their own unique identity and character.

When Obama says that to prefer Christian to Muslim refugees is "un-American," he is saying that all the U.S. immigration laws enacted before 1965 were un-American. And, so, too, were presidents like Calvin Coolidge who signed laws that virtually restricted immigration to Europeans.

Barack Obama may be our president, but who is this man of the left to dictate to us what is "un-American"?

Were presidents Harry Truman and Woodrow Wilson, who called ours a "Christian nation," un-American? Did the Supreme Court uphold our "universal values" with Roe v. Wade in 1973 and the Obergefell decision on same-sex marriage last June?

The race issue, too, has returned to divide us.

Half a century after Selma bridge, we have "Black Lives Matter!" on college campuses claiming that universities like Missouri, Princeton, Yale and Dartmouth are riddled with institutional racism.

Attention must be paid, and reparations made, by white America. And a new generation of academic appeasers advances to grovel and ask how the university might make amends.

In Europe, tribalism and nationalism are on the march. Peoples and nations wish to preserve who they are. Some have begun to establish checkpoints and ignore the Schengen Agreement mandating open borders. Eastern Europeans have had all the diversity they can stand.

With Syrian passports missing, with ISIS besieged in its Syria-Iraq laager and urging suicide attacks in New York and Washington, we may be witness to more terrorist massacres and murders in the States.

The time may be at hand for a moratorium on all immigration, and a rewriting of the immigration laws to reflect the views and values of Middle Americans, rather than those of a morally arrogant multicultural elite.