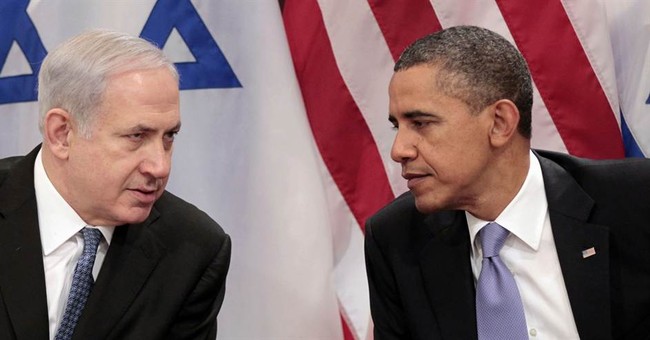 Trending
In his desperation to sink the Iran nuclear deal, Bibi Netanyahu is taking a hellish gamble.

Israel depends upon the United States for $3 billion a year in military aid and diplomatic cover in forums where she is often treated like a pariah state. Israel has also been the beneficiary of almost all the U.S. vetoes in the Security Council.

America is indispensable to Israel. The reverse is not true.

Yet, without telling the White House, Bibi had his U.S. ambassador arrange for him to address a joint session of Congress in March -- to rip up the president's Iran nuclear deal before it was even completed.

The day the deal was signed, using what The Washington Post calls "stark apocalyptic language," Bibi accused John Kerry of giving the mullahs a "sure path to a nuclear weapon" and a "cash bonanza of hundreds of billions of dollars ... to pursue its aggression and terror."

Bibi has since inspired and led the campaign to get Congress to kill the deal, the altarpiece of the Obama presidency.

Israel Ambassador Ron Dermer, a former Republican operative now cast in the role of "Citizen Genet," has intensively lobbied the Hill to get Congress to pass a resolution of rejection.

If that resolution passes, as it appears it will, Obama will veto it.

Then Israel, the Israeli lobby AIPAC, and all its allies and auxiliaries in the think tanks and on op-ed pages will conduct a full-court press to have Congress override the Obama veto and kill his nuclear deal.

Has Bibi, have the Israelis, considered what would happen should they succeed? Certainly, there would be rejoicing in Jerusalem and Tel Aviv, and Bibi would be crowned King of Capitol Hill.

But they will have humiliated an American president by crushing him by two-to-one in his own legislature. Such a defeat could break the Obama presidency and force the resignation of John Kerry, who would have become a laughing stock in international forums.

The message would go out to the world. In any clash between the United States and Israel over U.S. policy in the Middle East, bet on Bibi. Bet on Israel. America is Israel's poodle now.

With the Gulf nations having joined Britain, France, Germany, China and Russia in backing the deal, Israel is isolated in its opposition. And, two weeks ago, Kerry warned that if Congress rejects the deal, "Israel could end up being more isolated and more blamed."

Yet, Israel's ex-ambassador to the U.S. Michael Oren fairly dripped condescension and contempt in his retort: "The threat of the secretary of state who, in the past, warned that Israel was in danger of being an apartheid state, cannot deter us from fulfilling our national duty to oppose this dangerous deal."

But this is not Israel's deal. It is our deal, and our decision. And Israel is massively interfering in our internal affairs to scuttle a deal the president believes is in the vital interests of the United States.

When the U.S. and Israel disagree over U.S. policy in the Mideast, who decides for America? Them or us?

Why does Barack Obama take this? Why does John Kerry take this?

One can only imagine what President Eisenhower would have done had he seen Bibi at the rostrum of the U.S. House of Representatives, ripping apart his Middle East policy. Or had Ike learned that an Israeli ambassador was working the halls of Congress to kill an arms deal he and John Foster Dulles had just negotiated.

Eden and Ben-Gurion did as they were told.

That was an America respected by friend and foe alike.

When Harry Truman felt that Gen. Douglas MacArthur had been insubordinate in resisting presidential restrictions on his actions in Korea, Truman fired the general and astounded the nation.

Yet this president and John Kerry have been wimpishly seeking for weeks to placate Netanyahu. And Bibi is no Douglas MacArthur.

The president should declare Dermer persona non grata and send him packing, then tell the Israeli government we will discuss a new arms package when you have a prime minister who understands that no nation interferes in the internal affairs of the United States. None.

That could bring Bibi's government, with its single-vote majority, crashing down. And why not? After all, Bibi was a virtual surrogate for Mitt Romney when Mitt was trying to bring down Obama.

Obama and Kerry are never running again. Deep down, they would surely relish taking Bibi down. And they could do it.

Deal or no deal, it is time America started acted like America again.