A U.S.-Russia War Over Ukraine? 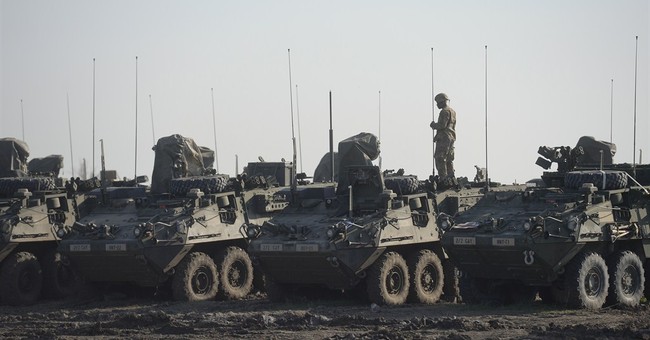 "Could a U.S. response to Russia's action in Ukraine provoke a confrontation that leads to a U.S.-Russia War?"

This jolting question is raised by Graham Allison and Dimitri Simes in the cover article of The National Interest.

The answer the authors give, in "Countdown to War: The Coming U.S. Russia Conflict," is that the odds are shortening on a military collision between the world's largest nuclear powers.

The cockpit of the conflict, should it come, will be Ukraine.

What makes the article timely is the report that Canada will be sending 200 soldiers to western Ukraine to join 800 Americans and 75 Brits on a yearlong assignment to train the Ukrainian army.

And train that army to fight whom? Pro-Russian rebels in Ukraine whom Vladimir Putin has said will not be crushed, even if it requires Russian intervention. Says Putin, "We won't let it happen."

What are the forces that have us "stumbling to war"?

On our side there is President Obama who "enjoys attempting to humiliate Putin" and "repeatedly includes Russia in his list of current scourges alongside the Islamic State and Ebola."

Then there is what TNI editor Jacob Heilbrunn calls the "truculent disposition" that has become the "main driver of Republican foreign policy." A "triumphalist camp," redolent of the "cakewalk war" crowd of Bush II, is ascendant and pushing us toward confrontation.

This American mindset has its mirror image in Moscow.

"Putin is not the hardest of the hard-liners in Russia," write the authors. "Russia's establishment falls into ... a pragmatic camp, which is currently dominant thanks principally to Putin's support, and a hard-line camp" the one Putin adviser calls "the hotheads."

The hotheads believe the way to respond to U.S. encroachments is to invoke the doctrine of Yuri Andropov, "challenge the main enemy," and brandish nuclear weapons to terrify Europe and split NATO.

Russian public opinion is said to be moving toward the hotheads.

Russian bombers have been intruding into NATO air space. Putin says he was ready to put nuclear forces on alert in the Crimea. Russia's ambassador has warned Copenhagen that if its ships join a NATO missile defense force, Denmark could be targeted with nukes.

In coming war games, Russia will move Iskander missiles into the Baltic enclave of Kaliningrad on Poland's northern border.

"Russia is the only country in the world that is realistically capable of turning the United States into radioactive ash," brays the director of the television network Rossiya Segodnya.

As of now, the "pragmatists" represented by Foreign Minister Sergey Lavrov retain the upper hand. They believe Russia can still do business with the United States and Europe.

"The 'hotheads' take the opposite view," the authors write, "they argue that NATO is determined to overthrow Putin, force Russia to its knees, and perhaps even dismember the country."

In Ukraine, Putin has drawn two red lines. He will not permit Ukraine to join NATO. He will not allow the rebels to be crushed.

Russia hard-liners are confident that should it come to war in Ukraine, Russia would have what Cold War strategists called "escalation dominance." This is what JFK had in the Cuban missile crisis -- conventional and nuclear superiority on sea and land, and in the air around Cuba.

With Ukraine easily accessible to Russian forces by road and rail, sea and air, and Russia's military just over the border while U.S. military might is a continent away, the hard-liners believe Russia would prevail in a war and America would face a choice -- accept defeat in Ukraine or escalate to tactical atomic weapons.

The Russians are talking of resorting to such weapons first.

The decisive date for Putin to determine which way Russia will go would appear to be this summer. The authors write:

"Putin will attempt to exploit the expiration of EU sanctions, which are scheduled to expire in July. If that fails, however, and the European Union joins the United States in imposing additional economic sanctions such as excluding Moscow from the SWIFT financial clearing system, Putin would be tempted to respond, not by retreating, but by ending all cooperation with the West, and mobilizing his people against a new and 'apocalyptic' threat to 'Mother Russia.'

"As a leading Russian politician told us, 'We stood all alone against Napoleon and against Hitler.'"

As of now, the Minsk II cease-fire of February seems to be holding. The Ukrainian army and pro-Russian rebels have both moved their heavy weapons back from the truce lines, though there have been clashes and casualties.

But as Ukraine's crisis is unresolved, these questions remain:

Will the U.S. train the Ukrainian army and then greenlight an offensive to retake the rebel-held provinces? Would Russia intervene and rout that army? Would the Americans sit by if their Ukrainian trainees were defeated and more Ukrainian land was lost?

Or would we start up the escalator to a war with Russia that few Europeans, but some Americans and Russians, might welcome today?