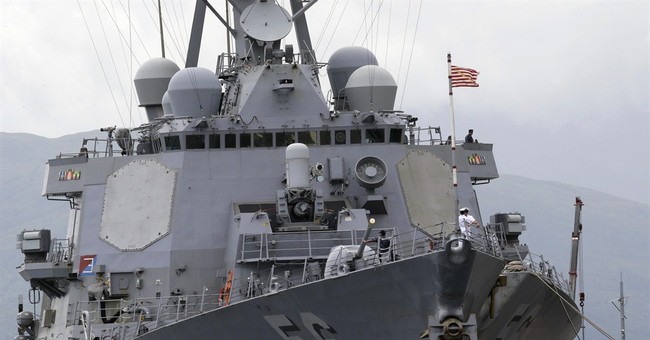 Trending
Barack Obama has asked Congress for $500 million to train and arm rebels of the Free Syrian Army who seek to overthrow the government.

Before Congress takes up his proposal, both houses should demand that Obama explain exactly where he gets the constitutional authority to plunge us into what the president himself calls "somebody else's civil war."

Syria has not attacked us. Syria does not threaten us.

Why are we joining a jihad to overthrow the Syrian government?

President Bashar Assad is fighting against the al Qaida-linked al-Nusra Front and the even more extreme and vicious Islamic State of Iraq and Syria.

In training and arming the FSA, we are enlisting in a cause where our foremost fighting allies are Islamists, like those who brought down the twin towers, and a Sunni terrorist army that seeks to bring down the government we left behind in Baghdad.

What are we doing?

Assad is no angel. But before this uprising, which has taken 150,000 lives and created millions of refugees, Congressmen and secretaries of state regularly visited him in Damascus.

"There's a different leader in Syria now," cooed Hillary in 2011, "Many of the members of Congress of both parties who have gone to Syria in recent months have said they believe he's a reformer."

If we bring down Assad, what assurance to do have that the Free Syrian Army will prevail against the Islamists who have proved far more effective in the field?

Will we not be compelled to plunge into the subsequent civil war to keep ISIS and al-Qaida from taking power?

If Assad falls there is also a high probability Syria's Christians will face beheadings and butchery at the hands of the fanatics.

And should martyrdoms and massacres begin with the fall of Assad because of our intervention, the blood of Christians will be on the hands of Barack Hussein Obama and the Congress of the United States.

Democratic Sen. Joe Manchin says he wants no part of Obama's new wars. Democratic Sen. Tim Kaine rightly asserts that President Obama has no authority to take us into war in Syria or Iraq.

But where are the Republicans?

Absent an attack on U.S. citizens or vital interests, or an imminent threat of attack, Obama has no authority to initiate war. The Constitution places the power to authorize wars of choice exclusively with Congress.

James Madison and his colleagues were seeking to ensure against a rogue presidency of the kind that Obama has lately begun to conduct.

It is astonishing that Republicans who threaten to impeach Obama for usurping authority at home remain silent as he prepares to usurp their war powers -- to march us into Syria and back into Iraq.

Last August, Americans rose as one to tell Congress to deny Obama any authority to attack Syria. Are Republicans now prepared to sit mute as Obama takes us into two new Middle East wars, on his own authority?

A congressional debate on war is essential not only from a legal and constitutional standpoint but also a strategic one. For there is a question as to whether we are even on the right side in Syria.

Assad, no matter his sins, is the defender of the Christian and Shia minorities in Syria. He has been the most successful Arab ruler in waging war against the terrorist brigades of ISIS and al-Qaida.

Why, then, are we training Syrians to attack his army and arming people to topple his government? Have we not before us, in Libya, an example of what happens when we bring down an autocrat like Gadhafi, and even worse devils are unleashed?

While Assad has battled al-Qaida and ISIS for three years, our NATO ally Turkey has looked the other way as jihadists crossed over into Syria. Our Gulf allies have provided jihadists battling Assad with arms and money.

Query: Why are our putative allies aiding our worst enemies?

This weekend ISIS declared a caliphate, the Islamic State, over all lands in Syria and Iraq it now controls. Abu Bakr al-Baghdadi, the ISIS war chief, has been declared the new caliph.

But who midwifed and breast-fed the ISIS movement that has now proclaimed the new caliphate? Was it not our Turkish and Arab friends?

And whose army is the major obstacle to consolidation of a caliphate from Aleppo to Anbar? Is it not the army of the autocrat Assad whom we seek to bring down? Does this make sense?

We are told that ISIS represents a security threat to the United States.

But ISIS-controlled Syria and Iraq are on the border of Turkey, whose army could make short work of them. If the caliphate is not such a threat to the Turks as to warrant their intervention in Syria, how can it be a greater threat to us? It cannot.

Congress should block the $500 million for Obama's wars and tell him his days as imperial president are over.