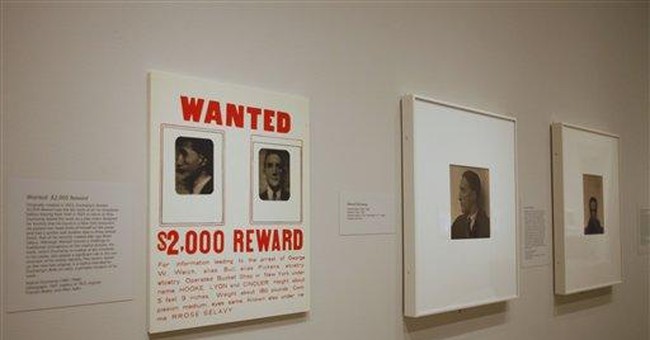 What in the name of Gilbert Stuart is going on at the National Portrait Gallery?

A week ago, CNSNews' Penny Starr reignited the culture war with an arresting story about the staid old museum that began thus:

"The federally funded National Portrait Gallery, one of the museums of the Smithsonian Institution, is currently showing an exhibition that features images of an ant-covered Jesus, male genitalia, naked brothers kissing, men in chains, Ellen DeGeneres grabbing her breasts and a painting the Smithsonian itself describes in the show's catalog as 'homoerotic.'"

Film of the crucifix with ants crawling on Jesus is from "A Fire in My Belly," a video by David Wojnarowicz, who died of AIDS in 1992, that expressed his rage and anguish at the death of a lover who also died of AIDS.

As this is a Christmas-season exhibit, it came to the attention of William Donahue of the Catholic League. He called the ants-on-Jesus image "hate speech" and demanded its removal.

The rest of the four-minute video of "A Fire in the Belly," writes Starr, portrays "the bloody mouth of a man being sewn shut ... a man undressing a man's genitals, a bowl of blood and mummified humans."

One wonders: Why has this exhibit not received a grant from the National Endowment for the Arts?

With all deliberate speed, the portrait gallery pulled the video.

Too late. By now the exhibit, "Hide/Seek: Difference and Desire in America," had come to the attention of House Republicans who may have just struck the mother lode of that "waste, fraud and abuse" that the Gipper was always talking about.

Other features in the exhibit include that painting of the naked men kissing with one holding a gun to the chest of the other and a 1954 painting of an aroused naked man, "O'Hara Nude With Boots," by Larry Rivers. "O'Hara" is poet Frank O'Hara, Rivers' lover.

How did The Washington Post react to Donahue's protest?

"The Censors Arrive," said the Post. Yet the ants-on-Jesus image, 11 seconds long, is no big deal said the Post, which chastised Reps. John Boehner and Eric Cantor for suggesting the exhibit could imperil Smithsonian funding.

The Post added, "We hope Mr. Cantor's threats prompt many additional Washingtonians to visit and judge for themselves."

But if the Post is interested in having Washingtonians "judge for themselves" this "art," why does the paper not publish photos of "O'Hara Nude With Boots"? If this is art the gallery should be showing high school kids who come to Washington each spring, why not let the Post's readers see what the controversy is all about?

To Post art critic Blake Gopnik, the "show about gay sex" at the gallery is "courageous" and "full of wonderful art. My review of it was a rave."

What Gopnik raved about are the kind of pictures that used to be on French postcards, the possession of which in the 1950s could get you kicked out of high school.

As for the gallery's pulling of "A Fire in My Belly," Gopnik wrote that the NPG curators "come off as cowards."

Down the hall from the "Hide/Seek" homoerotic art and gay sex show is the Steven Spielberg-George Lucas collection of paintings by Norman Rockwell, which they loaned to the gallery. While Gopnik raved about the former, the Rockwell paintings, so beloved of flyover country, are just the kind of bourgeois schlock art that truly repulses him.

Writes Gopnik: "Norman Rockwell would get the boot (from the National Portrait Gallery) if I believed in pulling everything that I'm offended by. I can't stand the view of America that (Rockwell) represents, which I believe insults a huge number of the non-mainstream folks."

The reason I don't demand that Rockwell's trash be pulled, says Gopnik, is "because his (Rockwell's) detractors, including me, got to rant about how much they hated his art."

Cantor "has said that taxpayer-funded museums should uphold 'common standards of decency,'" says Gopnik. "But such 'standards' don't exist and shouldn't in a pluralist society."

Gopnik and the Post have put critics of the gallery's sex show on notice that their protests are to be restricted to the verbal. Neither they nor Congress have a right to tell curators what to exhibit and not exhibit. "(T)he use of public dollars does not give lawmakers the right to micromanage or censor public displays," says the Post.

The gauntlet has been thrown down to the new GOP majority: Keep your puritanical hands off our museums.

The Smithsonian needs a haircut next year to remind these folks who's boss and that with public funding comes public responsibility.