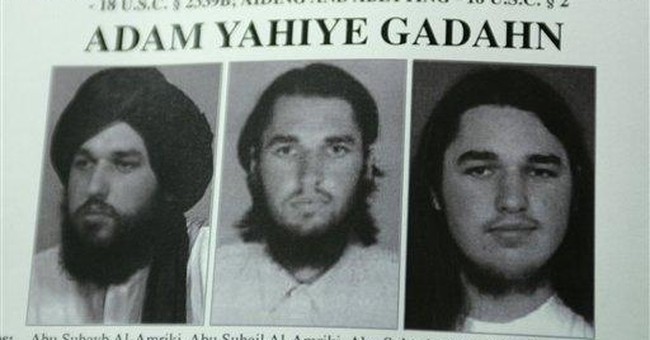 WASHINGTON -- Last week, this column described a deadly suicide attack by the Haqqani network on a secure compound outside Kabul, Afghanistan, and the failure of NATO officials to heed human intelligence that might have saved lives. I wrote, "The intel provided included information on how to precisely locate the terrorists. When I asked why the attack wasn't prevented, I was told: 'It was HUMINT. Nobody pays attention to HUMINT.'"

Shortly after the column appeared, a senior U.S. intelligence officer -- and a friend -- admonished me, "It's not just HUMINT." He described the problem as "institutional arrogance" and a failure to give credence "to information from outside the system."

"The system." Those two words describe a risk-averse, inertia-driven, leak-prone and politically correct bureaucracy now committed to "responsibly end" -- not win -- the war in Afghanistan. "The system" tells us that "the war on terror is over." But the institutional arrogance in "the system" goes well beyond simply ignoring information from "outside." It also creates complacency about vulnerabilities, jeopardizes our troops on the battlefield and exacerbates threats to American civilians anywhere on earth.

This week, before the so-called mainstream media plunged into a frenzy over President Barack Obama's endorsement of same-sex marriage, Saudi Arabia's intelligence service retrieved a new "underwear bomb," which was intended to be worn and detonated by a suicide terrorist aboard a U.S.-bound airliner. According to published reports, the device -- designed in Yemen by al-Qaida's master bomb builder, Ibrahim Hassan al-Asiri -- is much-improved over the version carried aboard Northwest Airlines Flight 253 from Amsterdam to Detroit on Christmas Day in 2009.

Though the new aircraft bomb is being analyzed by FBI explosives experts, the operation to obtain the device from Yemen was run by the Saudis. Nonetheless, the Obama administration immediately claimed credit, and in a now familiar pattern, details about the bomb and the Saudi double agent who penetrated al-Qaida in the Arabian Peninsula, or AQAP, were leaked to the press. Aboard Air Force One, White House press secretary Jay Carney told reporters that the president is "pleased with the success of our intelligence and counterterrorism officials in foiling the attempt by al-Qaida to use this explosive device." He went on to insist, "At no time were Americans in danger as a result of this, and as you know, we were able to foil the attempt to use this device."

Prince Mohammed bin Nayef -- head of Saudi Arabia's intelligence service -- has to wonder about the words "our" and "we" in the White House commentary. The prince has "skin in the game" when it comes to al-Qaida. In 2009, bin Nayef was nearly killed when an AQAP suicide terrorist detonated a "cavity bomb" during a royal audience. The bomber: al-Asiri's brother.

In an effort to reassure Americans who fly, the Obama administration maintains the capture of the new al-Qaida aircraft bomb demonstrates the effectiveness of "measures that we take to counter threats like this in the aviation industry" and is "indicative of the multifaceted approach" the O-Team is taking for "dealing with the threat." This, too, is institutional arrogance.

Rep. John Mica, chairman of the House Transportation and Infrastructure Committee, is concerned that there may well be more bombs and bombers out there. Officials from Janet Napolitano's Department of Homeland Security and the Transportation Security Administration -- already under investigation for mismanagement, waste, fraud and abuse -- insist the latest scanners can detect the "new and improved" suicide bomb. But Mica has reason to be skeptical. Many overseas airports don't use sophisticated equipment to detect nonmetallic explosive devices.

Members of Congress from both parties are howling about the hemorrhage of classified details regarding how the Saudis penetrated AQAP and the bomb they recovered. On Thursday, Defense Secretary Leon Panetta told reporters that the leaks "damage our ability to be able to pursue our intelligence efforts." James Clapper, the director of national intelligence, supposedly is conducting an "internal review" to determine whether classified information has been revealed. And just so everyone feels good about all this, an anonymous O-Team source leaked that the FBI has opened a criminal investigation on the leaks. You can't make this stuff up.

Unfortunately, the Obama administration's self-congratulatory "leaks" and hollow assertions about how safe we are from form-fitting exploding underwear mask an even more serious threat to commercial aviation. Four times over the past 10 months, this column has warned about man-portable anti-aircraft missiles missing from Moammar Gadhafi's arsenals in Libya. This week, David Ignatius, writing in The Washington Post, revealed that 800 of the refurbished missiles are now in the hands of al-Qaida-affiliated groups in Africa.

The Obama administration's chest-thumping claim that it is "winning the fight against al-Qaida" is hubris. Worse, the "institutional arrogance" and rejection of "outside" information places anyone who flies in harm's way.