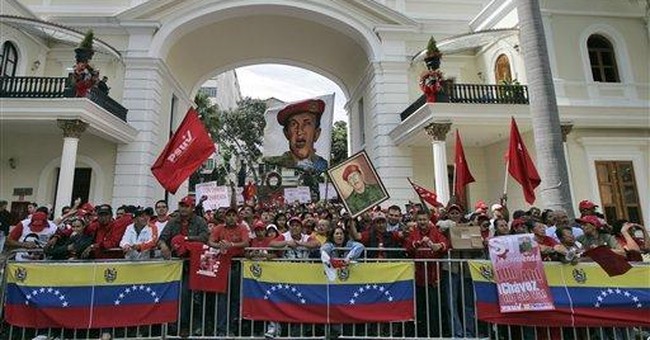 WASHINGTON -- This week, the so-called mainstream media fixated on a Baghdad shoe-throwing contest, more government bailout bucks, and the delightful prospect of having Caroline Kennedy appointed to Hillary Clinton's vacant seat in the U.S. Senate. The potentates of the press gave short shrift -- or simply ignored -- two far more important news stories: the first-ever assembly of Latin American leaders gathered to stick it to the United States and the passing of a great conservative leader who helped Ronald Reagan become one of America's greatest presidents.

Both stories deserved more attention than they received. That, however, would require journalists, news directors and editors to have some knowledge of history and current events beyond what they can collect from a quick Google search and have attention spans greater than a fruit fly's.

First, the Latin Leader Finger-in-the-Eye Stunt. They called it the "Latin American and Caribbean Summit on Integration and Development." It brought all but one of the Latin American and Caribbean heads of state to Salvador da Bahia, a Brazilian resort city, for a two-day blame-America-first confab, Dec. 16 and 17. Only Colombia's Alvaro Uribe did not attend; there were disastrous floods last weekend that made nearly a quarter-million of his countrymen homeless. The talk wasn't as pretty as the scenery, and we weren't even invited.

Ostensibly, Brazilian President Luiz Inacio Lula da Silva called the summit as an effort to help resolve a number of simmering trade, economic and security disputes among countries of the region. But the real purpose was tipped by the fact that U.S. representatives were excluded and Cuban dictator Raul Castro was invited. On his first trip abroad as "president," Fidel's little brother was welcomed at the gathering as if he was the prodigal son.

Venezuelan strongman Hugo Chavez confirmed that the principal purpose of the gathering was to send an unequivocal message to the incoming Obama administration. On Tuesday, Chavez told reporters, "There is no doubt that a new historic era is beginning." Just to make sure everyone got the message, he added, "The presence of Cuba is a very strong signal that America is no longer the boss in Latin America."

That's an understatement. Over the course of the past two years, Venezuela has placed orders for more than $4 billion in arms from Russia. Moscow also has dispatched strategic bombers and nuclear-powered warships to the region for "joint exercises." Last summer, Iran agreed to build an ammunition plant outside Caracas.

That's just the tip of the iceberg of our security challenge in the region. In September, Ecuador's president, Rafael Correa, decided not to renew a U.S. lease on a crucial air base used to launch and recover counter-drug-surveillance aircraft.

Meanwhile, Communist China, which already owns facilities at both ends of the Panama Canal, is "buying in" all over the region. In October, the Chinese lent $350 million to the Inter-American Development Bank. This month, China bought a $10 billion stake in developing Brazil's new -- and apparently enormous -- oil fields.

Amazingly, none of this seems to perturb the craven cabal at the U.S. State Department. Earlier this week, Thomas Shannon, the assistant secretary of state, told Bloomberg that the U.S. "didn't ask to be invited" to the Latin American summit. He went on to say that "there's no warfare, weapons proliferation, suicide bombers or jihadists" in Latin America. This stunning comment was widely ignored by the masters of the media.

So, too, was another big story this week: the death of conservative icon Paul Weyrich, the co-founder and first president of The Heritage Foundation. By the time I first met him in 1981 at a White House briefing, he was the head of the Free Congress Foundation and already a leading figure in Washington. When President Ronald Reagan wanted support for a measure being blocked by liberals in Congress, Paul was one of a small handful of people he counted on to get the word out. And Paul did.

During a time when I was enduring my own particular hell at the hands of Congress, Paul was one of those who encouraged me: "All things work together for good for those who love God." He was right.

During the more than quarter-century I knew him, Paul was consistently principled in all that he said and wrote. An articulate spokesman for Judeo-Christian values and truly conservative ideals, he was unwavering in his belief that individual liberty requires personal responsibility and that governments at every level have to be held accountable.

He was unhesitating in offering praise when it was due, encouragement when needed, and admonition when he felt it was warranted. His widow, Joyce, and their five children will miss a husband and father. I will miss a friend.