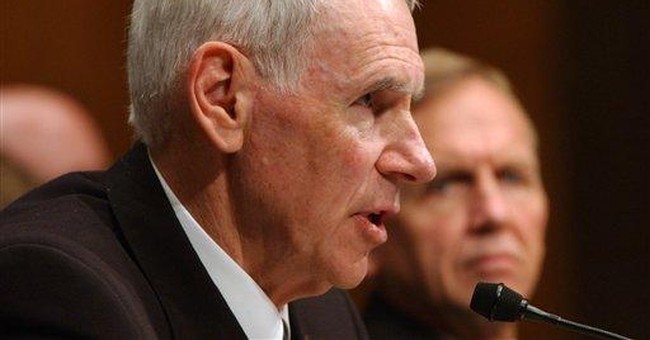 AIKEN, S.C. -- The salacious details of New York Gov. Eliot Spitzer's hypocritical, extramarital love life have captivated the media all week. Had the Empire State's chief executive picked a different day to get caught with his pants down and quit his job, some other prominent resignations might have received more coverage. Apparently, there just aren't enough journalists to stake out the Spitzer's Manhattan apartment, track down his hookers and cover these other premature exits.

Tales of the tainted governor took up so much ink and airtime that the potentates of the press didn't even notice the sex scandal that claimed the career of another powerful hypocrite: Tehran's brutal police chief, General Reza Zarei. The general, a favorite of Iranian President Mahmoud Ahmadinejad, has been responsible for "moral enforcement" of Sharia law, including "dress codes" that require women to be covered from head to toe. The chief "stepped down" after he was caught nude in a Tehran brothel accompanied by six naked prostitutes. It's a shame our press corps missed this one.

Spitzer's sexual shenanigans also pushed another unexpected departure into the background noise -- that of U.S Navy Admiral William "Fox" Fallon, the commander in chief of U.S. Central Command. Though devoid of the titillating details oozing out of Albany and Tehran, the March 11 resignation of the senior U.S. military commander in the world's most troubled and dangerous region is rife with hypocrisy.

Last week, the April edition of Esquire magazine contained a fawning puff piece on Fallon titled "The Man Between War and Peace." The article describes the commander "as brazenly challenging" President Bush on Iran. The highly provocative piece, written by Thomas Barnett, baldly claims that the White House "has been escalating the war of words with Iran" and seems "ever more determined to strike militarily before the end of this presidency." According to Barnett, Fallon "has urged restraint and diplomacy."

This week, according to his resignation letter released by Defense Secretary Robert Gates, Fallon claims that he is relinquishing command because "the current embarrassing situation and public perception of differences between my views and administration policy and the distraction this causes from the mission make this the right thing to do."

That's an interesting way to describe what some might call insubordination. It was, after all, a "public perception of differences between" his "views and administration policy," that resulted in President Harry Truman sacking General Douglas MacArthur on April 11, 1951 -- in the midst of the Korean War.

Within a month of his appointment as commander in chief of Central Command in March 2007, a running gun battle started between Fallon and his subordinate, General David Petraeus, over troop levels in Iraq. Most of those disputes have been aired in military channels -- and resolved in favor of the U.S. commander in Baghdad. Though extremely demanding for the troops on the ground and their families at home, the fact that "the surge" has worked so well in reducing violence in Iraq commends the wisdom of Petreus's plan.

But the admiral's differences with the president over U.S. strategy toward Iran and the threat posed by Tehran's nuclear ambitions have been an entirely different matter. For months now, Fallon -- like MacArthur in 1951 -- has been publicly disputing administration policy toward an avowed adversary. This should have gotten the attention of the Bush White House and the Gates Pentagon without the aid of an article in Esquire.

Last September, while the administration was in the midst of trying to ratchet up U.N. sanctions against Iran and was telling allies and adversaries alike that "all options remain on the table" to deter Tehran from acquiring nuclear weapons, Fallon said on Al Jazeera TV that "this constant drumbeat of conflict is not helpful and not useful." Less than two months later, he told the Financial Times that a military strike against Iran was "not in the offing another war is just not where we want to go."

The U.N. Security Council just passed a new sanctions resolution to enforce nuclear inspections. And this week, the U.S. Treasury announced that yet another financial institution connected to the theocrats in Tehran is banned from doing business in the United States.

All that may come as news to Fallon and his supporters in the press and the Democratic Party who now claim that he was sacked for being "too diplomatic." Or maybe it's just time that we're resigned to reality.