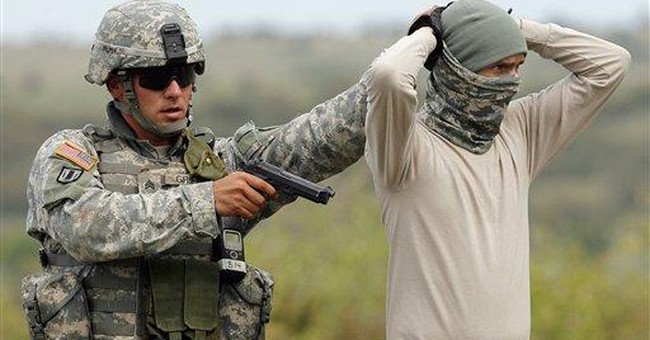 WASHINGTON -- In 1988, singer and songwriter Bobby McFerrin penned a Grammy-winning tune, "Don't Worry, Be Happy." When it comes to collecting intelligence on America's enemies, McFerrin's pleasant a cappella song is now the theme song for Democrats in the House of Representatives.

On Feb. 14, House Speaker Nancy Pelosi decided to send the members of the House home on vacation instead of having them vote on extending the Protect America Act, a measure that already had passed in the U.S. Senate 68-29. The bill, among other things, provides civil immunity for private companies that assist U.S. intelligence agencies in intercepting terrorist communications to, from or through the United States. With the House adjourned, the PAA expired -- and Americans became instantly more vulnerable.

As might be expected in the midst of a presidential election year, Republicans and administration officials immediately went to the airwaves and print to decry Pelosi's decision. Director of National Intelligence Mike McConnell took the unusual step of appearing on Fox News Channel to point out that termination of the PAA "introduces a level of uncertainty that is going to be very difficult for us."

Now, Senate Intelligence Committee Chairman Jay Rockefeller, D-W.Va., who backed the bill in the Senate, assures us that he's "going to work something out" with his House colleagues, but he refuses to speculate about how long that might take. Meanwhile private-sector telecom executives, wary of legal assaults from shareholders and "public interest" groups, are understandably reluctant to assist U.S. officials in breaking into terrorist communications. Concerns about what we may be missing -- and the immediate risk of a major terrorist attack -- go well beyond Washington politics.

Given the enormous flow of global voice and data communications, any interruption or delay in collecting "signals intelligence" jeopardizes the ability of analysts to determine and disseminate whether, where, how and when a terrorist organization may be planning an attack. That's what happened in the months leading up to 9/11 -- and the kind of vulnerability the PAA was designed to redress. Here's why U.S. and allied defense, security and intelligence officers are so worried about being deaf and blind right now:

On Jan. 28, Libyan terrorist Abu Laith al-Libi, No. 3 in al-Qaida, was killed by a missile strike in Pakistan's Waziristan province. The weapon is widely presumed to have been fired from a U.S. unmanned aerial vehicle. On Feb. 27, Ayman al-Zawahri, No. 2 in Osama bin Laden's worldwide organization, vowed vengeance in a 10-minute video placed on radical Islamic Web sites: "No chief of ours had died a natural death, nor has our blood been spilled without a response." What that response might be we may never know until after it has happened. And that's not all.

On Feb. 12, Imad Mughniyah, the man responsible for murdering and kidnapping hundreds of Americans in Lebanon and elsewhere, was killed when his car exploded in Damascus, Syria. Both Israel and the United States have been blamed for the terror chieftain's death. Since then, Hezbollah Secretary-General Hassan Nasrallah has promised to "avenge our martyred brother." Mohammad Ali Jafari, commander of Iran's Islamic Revolutionary Guard Corps, has vowed "retribution," and Ayatollah Khomeini has pledged "destruction on the illegal Zionist entity and their supporters."

Two days after Mughniyah's fiery demise, the Iranians canceled a previously scheduled "private discussion" with U.S. officials in Baghdad about the situation in Iraq. On Feb. 20, at a rally in Bandar Abbas, Iran, President Mahmoud Ahmadinejad described Israel as "filthy bacteria" and lashed out at nations that have allowed it to grow. Then Feb. 23, the theocrats running Tehran warned of "firm reprisals" against any country trying to impose new sanctions on Iran for proceeding with their nuclear program. Since then, the Iranian regime has confirmed that the March 2 visit by Ahmadinejad to Baghdad will be "historic for the changes it will bring to the region."

That's just what these "leaders" are saying in public. What they may or may not be saying in private about plans for attacks against American citizens we may not know until it is too late. For that, we can thank Madam Pelosi and her decision to postpone action on the PAA.

Those who claim that this delay won't hurt us should heed the warning proffered this week by Maj. Gen. Amos Yadlin, the chief of Israeli military intelligence. Testifying before the Knesset Foreign Affairs and Defense Committee Feb. 26, the normally tight-lipped general forecast: "Hezbollah will likely time its reprisals for the 40th day of mourning for its commander, Imad Mughniyah. That will be March 22-23."

Terror leaders such as those in Afghanistan, Pakistan or Tehran, who want to know our secrets, need only subscribe to The Washington Post or The New York Times. For the United States, the mission of finding out what our enemies are planning to do to us before they have a chance to do it always has been a challenge. That task has become far more difficult because of the Democrats running our House of Representatives. "Don't worry, be happy," indeed.