The Perfect Storm for Conservatives... If They Don't Blow It 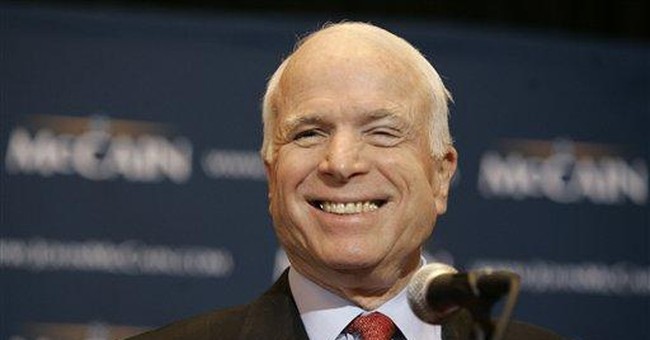 Conservatives have this uncanny ability to snatch defeat from the jaws of victory and overplay every hand dealt them. They squandered the Reagan Revolution by parsing and dicing an agenda of positions unobtainable from even the most charismatic, or messianic of candidates. The color required to attain “conservative” credentials on the litmus paper appears in no color wheel known to man. The acceptable candidates in this category are whittled to a pencil point that can only scribe the name of Ronald Reagan.

In the hopes that more people would have adopted his manner of principled politics, abandoning the mud fight that is covering the nation in sludge, conservatives have searched diligently for an heir apparent while consistently aborting their own. No one is pure enough, conservative enough, and principled enough to wear that mantel, yet they still hold every elected official to that standard. And, ironically, the country holds the entire Republican Party to that same standard while acknowledging that the Democrats and their party are incapable of feigning an attempt at such lofty heights.

Barney Frank is seen as the voice of all that is virtuous in sexual preference while Mark Foley is run out of town on a rail for his dalliances in alternative lifestyles. Senator Larry Craig is tarred and feathered by the giddy left while claiming the right is homophobic. Tom Delay is driven out of office by an over zealous partisan prosecutor while Congressman William Jefferson commandeers government sources to salvage his personal items, including the $90,000 in his freezer. George Allen can utter a made up word that morphs into a racial slur while the Democrat who filibustered the Civil Rights Bill gets a pass, once again. I’m not really sure what happened to Newt Gingrich, but I am sure he didn’t lie under oath or seduce an intern like Bill Clinton did. Bill has had so many sexual improprieties it would require a certified public accountant to keep track of them and somehow he is the victim and the women are the vile creatures seduced by that siren of the right wing conspiracy. His wife gets the mea culpa senate seat in a state she has never lived in, and a multi-million dollar house she didn’t spend a dime on . . . and she is the victim, not the women her husband abused.

We have watched Clarence Thomas endure a “high tech lynching,” seen Condoleezza Rice reduced to caricatures of Aunt Jamima and seen Michael Steele have Oreo cookies thrown at him for daring to leave the liberal plantation and express their own political views based on principal. Alan Keyes was all but ignored in his bid for president even though his resume, his intellect, his articulate ability and passion for a country he has always loved, shine like the sun compared to the flickering candle of the finalist in American Idol President, Barak Obama. Why have all these people been held to an impossible standard by both the left and the right? Different reasons. The left has identified all things Republican as akin to the anti-Christ . . . not that they acknowledge there is a Christ, but it is an apt analogy. And the “right”, once again, can’t seem to get its judgmental act together to recognize good people and get behind them when they are willing to put their lives on the line for the country.

So what we are seeing on the horizon is a perfect storm for a group bound by common philosophy that is at odds with all the participants in the 2008 presidential elections. If conservatives would take a moment from eating their young, look up from the bloodied carcass of fallen comrades they have abandoned in the hunt for perfection, they would see a perfect storm on the horizon.

John McCain has somehow, managed to edge out other candidates who were rejected by conservatives because they were not perfect enough . . . or they were too perfect. I can’t seem to get my arms around the fact that Mitt Romney looked too perfect, had great credentials, good administration skills but just wasn’t good enough. Giuliani was America’s Mayor, and granted, Mayor is not a resume topper, but neither is being the housewife of a man who cheats on you and finagles a senate seat in lieu of candies and flowers. Only Duncan Hunter had a perfect conservative score, yet the conservative elite sat around, wringing their hands searching for a candidate with a perfect conservative score. And even Mike Huckabee is far more conservative than John McCain, yet, he was rejected in favor of Hillary and Obama.

It has been twenty years since Reagan left office and the only ones who have accomplished anything have been summarily reprimanded and reproached for doing too much, not doing enough, not doing it the right way . . . whatever . . . they have passed and the movement is a dying ember fanning itself in the hopes of igniting a flame of revolution.

This is the perfect storm for such a revolution, if that once powerful group of leaders would give one final gasp of passion and unify their collective efforts to throw down a gauntlet of compromise and ultimate victory.

That gauntlet, to the heir apparent in the Republican Party, John McCain, is very simple and has only two parts. The vice presidential running mate should be vetted by the conservative wing of the party as acceptable, and he will magnanimously acknowledge and agree that if he is elected, he will serve only one term.

If conservatives can coalesce behind those terms, which would be a miracle, then there could possibly be hope for the future. If not, Hillary or Obama will win . . . depending on who gets the Democratic nomination.

And if McCain does not agree, those who feel they are once again being railroaded and forced to accept an unacceptable candidate, should not sit this election out, but vote their voice and select a write-in candidate who should have been chosen as a running mate. One very positive by product of losing the general election is that the leadership of the Republican party convenes to elect a new leader as opposed to having one selected by the sitting president. This is the silver lining of a perfect storm.

If Hillary is the nominee, she will be a one-termer with a hostile senate and congress because it will be a known fact that Barak was cheated out of the race. She will be a pariah in the media, in the Democratic Party, and in the nation’s eye. She will retaliate with draconian measures to bring her “subjects” in line and a revolt will occur. If Barak wins, the populace will be crying “uncle” in two years as they struggle to regroup from oppressive taxes, regulations, restrictions and government’s tightening stronghold of unrestrained power. And that huge money-making machine known as “baby boomers,” will begin to slowly grind to a screeching halt as young retirees realize they would much rather spend the rest of their lives doing what they want, not what the government dictates. That young, impressionable group of new voters will be expected to pick up that slack, receiving paychecks that barely cover expenses and their altruistic nature will turn ugly with greed as they realize they have nothing to show for giving the government 50% of their hard earned money. They will expect their young president to have the answer and his response will be to tax and spend more and more.

If either Hillary or Barak wins it will be because McCain would not negotiate with his base and humbly understand that winning the election is impossible without them. If McCain agrees to the conditions, reneges on the agreement to not run a second term he will become Bush 41, surrounded by moderates who actually thought he could win without the base, which ironically was the same reason Dole lost. So McCain can do what is best for the country or he will either Bush himself or Dole himself. And it is between him and the conservatives in the party if they have the courage to press the issue.

The perfect storm is brewing and it is up to the conservative base to recognize it and do something about it.