Japan Might Finally Be Ready to Join the War on Terror 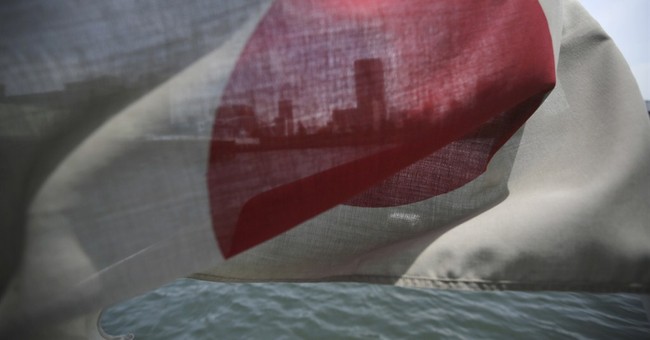 Japan: Over the weekend, a senior Japanese diplomat described the beheading of the two Japanese nationals by the Islamic State of Iraq and the Levant (ISIL) as Japan's 9/11. "It is time for Japan to stop daydreaming that its good will and noble intentions would be enough to shield it from the dangerous world out there. Americans have faced this harsh reality; the French have faced it, and now we are, too."

Prime Minister Shinzo Abe promised to make the terrorists pay. "No country is completely safe from terrorism. How do we cut the influence of ISIL, and put a stop to extremism? Japan must play its part in achieving this." Abe said the Self Defense Forces must have the mission of rescuing Japanese citizens overseas. Abe also said Japan will not join the US-led coalition fighting ISIL.

Comment: The ISIL executioner is responsible for precipitating a cultural clash whose implications and ripple effects are enormous, but not yet determinable. What is especially outrageous to the Japanese is that the ISIL executioner said on the video that he was killing the hostages because Japan was a member of the US-led coalition against ISIL. Japan has never participated in the US-led fight against ISIL in Syria or Iraq in any fashion.

Actions, especially lies, have consequences. Prime Minister Abe has the support of the people for seeking revenge, but in a Japanese way. Japan will join the nations determined to kill ISIL, but not the US-led coalition. Japan will send assassins.

For years, old hands have worried and speculated about what set of circumstances or sequence of events would re-awaken Japan's martial spirit. Ironically and naively, US policymakers and planners have struggled for decades to persuade Japan to increase its defense budgets; to take on a greater share of responsibility for its own defense, and to participate more in multilateral, global security operations by committing self-defense forces.

All of this was driven primarily by US budgetary considerations. Asian leaders and survivors of World War II, however, wondered about the wisdom of the US urging Japan to rearm under any circumstances.

Some experts judged that North Korean missile shots and nuclear tests would heighten Japan's concern for its own defense. They were partially correct.

NightWatch has no doubt that Japanese forces, acting in self-defense, have developed the defense plans for attacking North Korea. They could and would quickly destroy North Korea's puny nuclear weapons and missile infrastructure without US help, should the occasion arise.

Japanese leaders have the will to attack North Korea in self-defense. Oddly, the North Koreans do not seem to appreciate Japan's capability to destroy North Korea - as a place suitable for human habitation.

Other experts judged that China's pretense to be the regional hegemon and its assertion of sovereignty over Japanese-claimed islands would be the catalysts for Japanese nationalism and militarism. They also have been partially correct because Abe's government has identified China as a threat; increased the defense budget; has sought to amend the Constitution; and has committed to building an aircraft-carrier based maritime self-defense force.

Another impetus for steady, but slow rearmament has come from recent operations. These include naval support missions based in Mumbai, India, during the US fight to overthrow the Taliban; anti-piracy patrols off the Horn of Africa; naval exchange visits with India, and participation in peacekeeping and humanitarian missions.

None of those, however, have had the effect of the two beheadings in arousing Japanese nationalism and the national outcry for revenge. The ignorant Islamists who call themselves jihadists have done more in a single weekend to awaken the Japanese military spirit than anything North Korea, China and the US have done in seven decades. They have awakened a sleeping giant hat is extremely dangerous.

Egypt: A court upheld death sentences for 183 Muslim Brotherhood members for their roles in a 2013 attack on a police station near Cairo. Eleven police officers died in the attack, which occurred after Egyptian military forces cracked down on Islamist supporters of ousted President Mohammed Mursi last July.

As for Mursi, he and 10 others face a new espionage trial on 15 February. He is accused of leaking classified documents to Qatar and to Al-Jazeera.

Mursi also faces three other trials, including another case of espionage. He and his co-defendants could be given the death penalty if found guilty.

Comment: The al-Sisi government and the senior religious authority have sided against Mursi and would prefer to see him and his Brotherhood friends executed. However, all 183 Brothers, Mursi and his cohorts can appeal their sentences. Some will not be executed, lest they be revered as martyrs and heroes

Ukraine: The government in Kyiv and the regime in Donetsk are making moves to escalate the conflict.

The Kyiv government is attempting to rescue the forces in the Debal'tseve pocket by committing more armor, artillery and soldiers, supported by four Mi-24 helicopter gunships.

The Donetsk regime announced a general mobilization to create a force of 100,000 men. The draft apparatus is to be operational in ten days.

Comment: The fight for Debal'tseve continues to develop as the most important battle in the Ukrainian civil war.

Ukraine claims it is reinforcing its forces in Debal'tseve. The description of the forces committed to the Debal'tseve pocket, however, indicates Kyiv is trying to break through the rebel encirclement in order to rescue its forces.

Actually, Kyiv is reinforcing a defeat, which never succeeds. The Ukrainian forces should have been withdrawn a week or so ago, when the road to Artemivs'k was open. A disaster is threatening for the Ukrainian forces in Debal'tseve and for Kyiv.

Some analysts judge that the rebel call for general mobilization is a cover for more Russian "volunteers" to rally to the defense of the separatist regions. The population of the separatist regions is about 3 million people. That population base has been reduced and cannot support an army of 200,000 fighters, including those now in combat. Expect more Russian volunteers, equipment, ammunition, and logistics support for the rebels.

The latest battlefield successes by the separatist forces and by the Russian volunteers suggest a shift in Russian policy has taken place. In this hypothesis, the Russians have concluded that Ukraine remains determined to defeat the Russian-speaking separatists in Donetsk and Luhansk. Talks about achieving a peaceful settlement are pointless

The near-term aim of Russian support now is to empower the separatists to defeat Ukrainian forces decisively and to enable the separatists to expand their territory to include all Russian-speaking portions of the Donetsk and Luhansk Oblasts. Debal'tseve is the pivot point.

Libya: The internationally recognized parliament in Tobruk revoked a controversial law that banned Qadhafi-era officials from taking part in politics. The law was passed under duress in 2013 when armed groups in Tripoli held the government hostage.

Comment: The impact of the parliamentary action probably will be limited in numbers, but might be significant in attracting quality respondents. The move is an appeal for support that crosses tribal and militia allegiances, i.e., an appeal to national loyalty as Libyans. Those who worked for Qadhafi will have opportunities to serve again, maybe, in the Tobruk government.