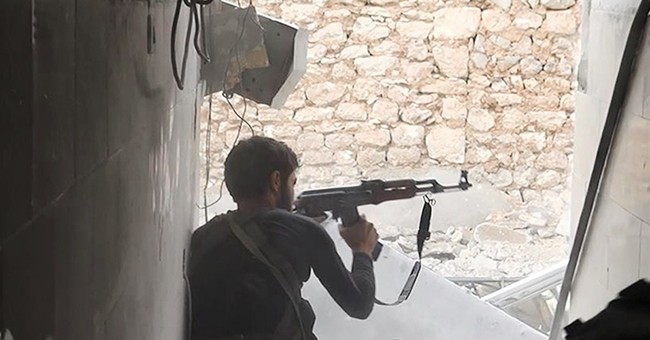 Syria: The Syrian Kurdish YPG or People's Protection Units -- an affiliate of the PKK which is considered a terrorist organization by the United States, the European Union and Turkey -- controls the Syrian town of Ras Al-Ain and intends to keep it as the core of an independent country for Kurds.

"We are ready to cooperate with anyone who respects the will of our people and accepts us as we are. We are building a new system within the old regime," said YPG commander Hussein Kocher, a local commander. The group is part of the force defending the city of Kobani.

Although unrecognized by any government, Kurdish self-rule has already come to Ras al-Ain, Kocher said in an interview. A civil marriage law, the first in the Middle East, and a ban on polygamy have been adopted.

Comment: The YPG at Ras al-Ain reportedly has 30,000 fighters that they can bring to the fight against the Islamists. If this force lives up to its bluster, the Western coalition would owe it a lot.

The key feature of the YPG's terms is that the Kurdish state it envisions would include Kurdish regions in multiple states, similar in concept to the claims of ISIL.

At Kobani. On Wednesday,Kurdish and Syrian fighters in Kobani recaptured a hill that overlooks an important terrorist supply route. After continuous fighting that started on Monday, the fighters - which include soldiers from the People's Protection Units (YPG), Iraqi Kurdish Peshmerga and the Free Syrian Army - have taken back a strategic part of Mashta al-Nur, a hill which overlooks Kobani.

Comment: Interdiction of the Islamists' supply route could be one of the few significant achievements of the past 50 days of fighting at Kobani, second only to the fact that the fight continues. Control of Kobani itself remains divided.

A Kurdish homeland must be considered one of the prices of defeating the Islamic State of Iraq and the Levant, if the Kurds make the critical difference in the outcome of the fighting..

Syria-Islamic State of Iraq and the Levant (ISIL)-Jabhat al-Nusra: On 2 November, leaders from ISIL and the al-Qaida-affiliated al Nusra Front plus five other terrorist groups agreed to stop fighting each other and to join forces in fighting their opponents. The meeting among seven top militant leaders took place in a town west of Aleppo.

Comment: There probably is less here than meets the eye and ear. The announced meeting appears to be primarily a propaganda stunt in reply to the US announcement of intensified air attacks plus possible introduction of combat forces. The more extreme Islamist groups have fought each other over control of territory, but they also have cooperated locally in attacks against more moderate anti-Baathist fighting groups and against the Baathist government's forces.

The agreement appears to elevate and sanction the local cooperation that has been longstanding, depending on the location. Nevertheless, the differences among these groups exceed by far the areas of agreement.

Burkina Faso: The military leadership said on Thursday that it agreed to a blueprint for a transition to civilian rule. Military government leader Lieutenant Colonel Zida told the press that, "The army is okay with the transition charter….We have come to an agreement on the structure and even the organs of the transition….Now we are discussing who to appoint where."

Zida said that the posts of president and the head of the interim parliament would go to civilians.

According to press accounts, the transition blueprint stipulates that the transitional president would be a civilian, who would name a prime minister to form a cabinet of 25 members.

The speaker of the interim parliament, the National Transition Council (CNT), will be a civilian "elected by his peers" and not a soldier as the army had previously demanded. It would include 25 opposition members, 25 from civil society, 15 military figures and 10 supporters of former President Compaore. The body would also be empowered to pass laws.

According to the draft, no members of the transitional regime would be allowed to stand in the next elections.

Comment: The Burkinabe military appears to be following the guidelines for a swift return to civilian government specified by the African heads of state who visited Ouagadougou on 5 November. Nevertheless, the military government has not stated a target date for the elections or the final transfer of power. It might yet renege.