Hopes for a Hong Kong Democracy are Slipping 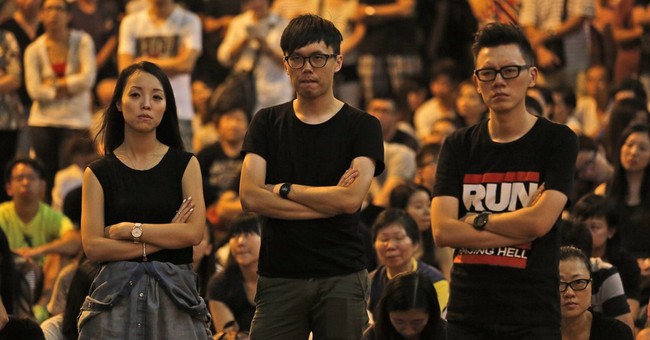 North Korea: On 10 October, North Korea celebrated Party Foundation Day in honor of the 69thanniversary of the Workers' Party of Korea. State media reported that Kim Jong Un visited Kumsusan Palace at midnight on 10 October with senior military officials. He made no public appearance.

Comment: Kumsusan Palace contains the tombs of Kim Il-sung and Kim Chong-il. It would be normal for the head of the Party to appear in public on this occasion, as Kim did in the past two years. The obvious inferences are that Kim is well enough to pay tribute to the founders, but does not want to be seen by the public.

Hong Kong: On Thursday, Hong Kong called off talks with protesting students. Authorities said that the students' call for an expansion of an uncooperative movement undermined the basis for talks and made it impossible to have a constructive dialogue.

Chief Secretary Carrie Lam blamed the government's cancellation of the talks on the students' demands for universal suffrage, which she said was not in accordance with Hong Kong's Basic Law; on their illegal occupation of parts of the city and on their fresh calls for the people to rally in protest.

Comment: Once the size of the protest movement decreased, talks became pointless because the protestors no longer could claim to be the voice of a political movement.

India-Pakistan: Update. Indian and Pakistani forces exchanged mortar and gun fire along the International Border for a fourth day in a row. Pakistani troops targeted over 130 villages and 60 Border Out Posts (BOPs) overnight, injuring 12 people. The firing and shelling continued intermittently until mid-day. The Pakistan Rangers and the Indian Border Security Force were responsible for most of the firing.

A limited number of attacks occurred across the Line of Control.

Comment: India Prime Minister Modi reportedly is watching the situation closely and is not alarmed by it. A potentially positive development in the last day is that paramilitary forces are engaged in the exchanges of fire, instead of conventional army units.

Comment: One news source reported that the detonation in Sana'a targeted gathering of Houthis, suggesting a Sunni militant groups was responsible for the attacks.

Two weeks ago, the Houthis, who are Shiites, appeared close to achieving a fundamental change in Yemeni politics in favor of inclusiveness and some political reform. That outcome looks less likely.

The atrocity prompted taxi drivers to stage a job action that produced gridlock in Bangui.

Comment: The killings are the latest manifestations of a surge in fighting between Muslims and Christians. The nature of the attacks suggests they are primarily criminal offenses. The country is not secure, but 2,000 French soldiers and several thousand African Union and UN peacekeepers stabilize the government.

In Biden’s own words: “There is no Biden Rule, It doesn’t exist.”
Hotair
Top Five Candidates For Nomination to Ginsburg Seat on the Supreme Court — No Men Allowed
Redstate