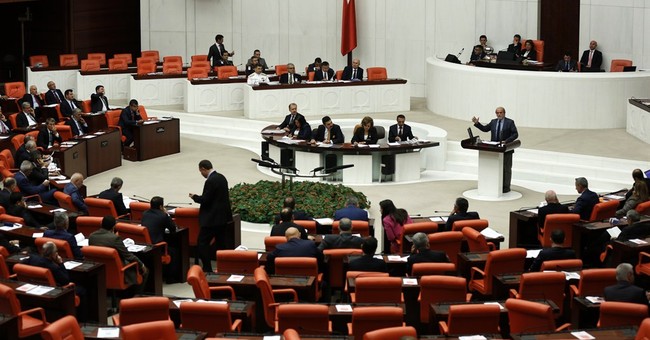 China: Several news services reported that China's aircraft carrier CNS Liaoning returned to service on the second anniversary of its commissioning on 25 September. It completed post-commissioning sea trials in January 2014. In April, the ship began five months' of shipyard maintenance.

Comment: Some commentators judge the next phase of the ship's activity will focus on developing combat capabilities with its escorts and with the air wing. More sovereignty enforcement missions in Chinese-claimed sea areas are likely.

Turkey: Yesterday, the government submitted a proposal to parliament that would allow Turkish troops to conduct operations in Syria and Iraq, and to allow foreign forces to use Turkish military bases.

President Erdogan sent mixed messages about the proposal. He said Turkey would "fight effectively against the Islamic State and all other terrorist organizations within the region." However, he also said, "Dropping tons of bombs from the air is only a temporary solution and only delays the threats and the danger of the Islamic State."

Comment: Turkey's military priorities are the creation of a buffer zone in Syrian Kurdistan and enforcement of a "no fly zone" against the Syrian air force. The US, the Coalition leader, favors neither proposal. Nevertheless, Turkey has the trained manpower and resources to defeat the Islamic State of Iraq and the Levant (ISIL). It is not clear it has the will. Erdogan's caution about the limitations of the air campaign appears calculated to justify his buffer zone scenario.

One Syrian Muslim told an interviewer what many everyday Sunnis appear to believe: "ISIL has made mistakes, but they are still brothers." That statement reveals a moral judgment that beheadings, killing fellow Muslims, killing non-combatants and seizing other people's land are mistakes of the overzealous. Others consider them crimes against the international order or against humanity.

Iraq: Prime Minister Haider al-Abadi said in an interview published today that he "totally" opposes Arab nations joining air strikes against the Islamic State in his country. However, he also said Western air power had "filled many gaps" in Iraq's fight against the jihadist group.

He claimed Iraqi government forces had "contained" the existential threat to Iraq posed by ISIL and removed the danger of an onslaught on Baghdad, but added that he was not "taking any chances". He insisted no foreign ground troops were needed. He said he was restructuring the army in order to protect the public. He warned that "international and regional polarization" had contributed to the rise of ISIL and said he wanted to improve relations with neighboring countries.

Comment: Abadi's remarks spotlight fundamental problems of threat recognition. Regardless of the threat from ISIL, Abadi judges he must insist that fighter aircraft flown by Sunni pilots must not bomb in Iraq. One explanation for this extraordinary comment is that the Iraqi Shiites are afraid the Sunni Arabs will bomb Shiite areas, while they happen to be in the airspace. Alternatively, he might be playing to the Shiite base, which is al Maliki's constituency, to absolve himself of blame in the event some air mission miscarries in the future.

As for containing the existential threat to Iraq, ISIL has carved it up. Iraq does not exist except on maps. Not only has ISIL taken Iraqi towns, or perhaps formerly Iraqi towns, the residents have switched loyalty for now at least. They had little loyalty to Baghdad under Shiite control beforehand.

The Turkish government might get parliamentary approval for Turkish soldiers to operate against ISIL in Iraq, but they will not get Baghdad's approval.

Finally, the Iraqi army has not removed the danger of an onslaught on Baghdad. It apparently cannot defend the Shiite neighborhoods in and around Baghdad and probably not the Shiite regions south of Baghdad, provided ISIL could manage the logistics of a long distance offensive.

Today ISIL claimed and Iraqi security sources confirmed that a car bomb in a Shiite suburb of Baghdad killed 20 and injured 35. ISIL also claimed to have fired four GRAD rockets at Baghdad. That attack has not been confirmed or reported by other sources.

The politicians in Baghdad do not seem to appreciate the precarious position they occupy. Age old hatreds of the Turks and the Sunni Arabs remain more important than the ISIL threat to Baghdad and the fragmentation of the country. It is no longer clear what expanse of territory they mean when they speak about Iraq. They seem prepared to write off much of the north.

The use of GRAD rockets is potentially ominous because some variants can range 50 km. ISIL forces hold multiple positions in a 20km arc on the west side of Baghdad. Fighters equipped with GRAD rockets could easily range Baghdad.

One of the lessons of Israeli Operation Protective Edge this summer is that sustained and concentrated air strikes against familiar targets did not stop the Palestinians in Gaza from launching rockets up to the time of the ceasefire. Baghdad is not Gaza, but then ISIL is better equipped than the Palestinians and has lots more room to maneuver.