ISIL Will Take Over Kurdish Areas of Iraq 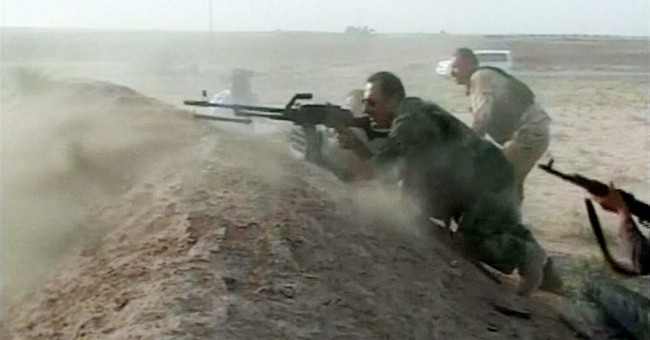 South Korea -North Korea: On Monday, South Korea proposed high-level talks with North Korea next week about resuming reunions of Korean War-divided families. The South Korean Unification Ministry said in a statement that it suggested meeting 19 August at Panmunjom. The South also announced it donated $13.3 million to the World Health Organization and the World Food Program to assist infants and nursing mothers in North Korea.

North Korea has not responded.

Comment: Family reunions are important to Koreans, especially at the harvest festival, Chusok, which will be celebrated on 8 September. In making this proposal, the South preempts the North in acting as the champion of reunification.

Afghanistan: US intervened again in Afghan politics to try to break the political deadlock over the presidential election and the voter fraud audit, which appears to be going nowhere. Both presidential candidates, Ashraf Ghani and Abdullah Abdullah agreed to the US-brokered deal for forming a national unity government.

At stake are the fundamental nature of the system of government and its legitimacy. On Friday, the US Secretary of State said the issue is not about who won the election, but whether the outcome is credible to the people. However, by definition, a credible outcome of an election is a winner.

The power-sharing arrangement has no basis in the Afghan constitution, any legislation or any manifestation of public will. It has no legitimacy. The Taliban have more legitimacy as the standard-bearers of Sharia in an Islamic emirate.

The solution that breaks the political deadlock is conveying the message that the elections and the Afghan constitution don't matter in choosing a national leader. The Taliban share those beliefs.

Iraq: Iraq has a constitutional crisis inside its existential military crisis. With lots of outside encouragement, Iraqi President Fouad Massoum nominated deputy parliament speaker Haider al-Ibadi to be the next prime minister of Iraq.

Prime Minister al-Maliki's Dawa Party immediately rejected the nominee. Over the weekend, al-Maliki ordered loyal troop units and militias to the palace after he declared that President Massoum was staging a coup against him and his State of Law coalition. He also suspended parliament's Sunday session. Al-Maliki refuses to leave office.

Comment: This is another strange political situation because almost no stakeholder in Iraq, including Grand Ayatollah Ali al-Sistani and the Iranian government, wants al Maliki to serve for a third term. However, a plurality of the Iraqi voters voted for him and his party. Under the constitution, the President of Iraq is required to invite the party with the largest number of votes in parliament to try to form a government. That is not happening.

The next government in Baghdad might prove to be more inclusive, but it will have been formed by a questionable process. It will lack legitimacy. Meanwhile, the security situation in Iraq has long passed the point where greater political inclusiveness matters.

The key problem for Iraq is whether it can find lines that it can hold so as to preserve itself as Iraq. The threat is existential, not political. It is national, not just in Baghdad. The Shiites might have been encouraged to get serious about the threat from the Islamic State of Iraq and the Levant (ISIL).

The Iraqi politicians seem to have bought into the idea that political programs in Baghdad will stop ISIL by eroding Sunni Arab support for ISIL. It should be obvious to all that the Sunni Arabs have been outsmarted and outmaneuvered by ISIL. They helped ISIL in the beginning, but they now are no longer needed by or relied upon by it. ISIL has become an army with modern US weapons and lots of supplies.

Before ISIL captured the Iraqi army's supplies, its intrusion into Iraq was containable. Once Mosul fell, the military variables changed almost decisively in favor of ISIL.

According to weekend analyses, ISIL threatens Baghdad along multiple axes, including from the south. If it seizes Baghdad, as it now appears capable of doing eventually, the time and energy spent searching for a long term political solution in the face of an imminent violent threat will prove irresponsibly naive. But the defeat of the Kurds will come first.

The Kurds. The US Navy and Air Force are flying up to 100 attack and reconnaissance missions daily over Iraq, according to a U.S. military official. They include as many as 30 daily missions by Air Force refueling tankers.

Comment: The above statement is almost the definition of an unsustainable and ineffective tactical gesture. While the number 100 missions sounds respectable, thirty percent are refueling missions. An unstated additional percent are reconnaissance. One report indicated that 15 strike missions occurred on one day last weekend. That means this is not a strategic campaign, just limited tactical relief. When the aircraft depart, ISIL takes more towns, as it did this past weekend.

The Kurdish militias are too lightly armed to stand against ISIL's tanks, other armored vehicles and weapons. There does not appear to be enough time to build a supply chain to save the Kurds, even if staging bases were available.

Turkey: In elections this weekend, Turks elected Prime Minister Erdogan as the next president of Turkey in the first direct popular election for a president. He received 52% of the popular vote -- a clear majority in a three-way race.

Israeli analysts were prominent among those analyzing the implications of the election. They and others pointed out that Erdogan has a new mandate to reshape Turkey into a more Islamist state, more firmly rooted in Sharia. They judged that the vote also approved his stated intention to convert Turkey's government into a presidential system from a parliamentary. He has promised to hold a constitutional referendum to make these changes. Erdogan appears to be on a path to becoming a Turkish version of Syria's Asad.

Israel: Israeli and Palestinian delegations agreed to a new three-day ceasefire which appears to be holding. Negotiations for a longer ceasefire are occurring in Egypt.

Hamas's armed wing prematurely terminated the previous ceasefire early on Friday with a rocket attack before it expired and a barrage attack after it expired. No Israelis died, but the Israeli air attacks killed another 100 or more Palestinians. The death toll supposedly is now more than1,900.

Comment: Prior to the latest ceasefire the rocket and mortar attacks and Israeli air strikes were continuous, but the Palestinians used more mortars and short range rockets. Hamas appears to think it has won the confrontation and refuses to compromise on its demands, which include lifting the Israeli and Egyptian blockades and building a seaport.

Ukraine: Russia said on Monday that it is sending a civilian aid convoy to eastern Ukraine in cooperation with the Red Cross. The regime in Kyiv also said an aid mission was planned but that Western nations would be involved and Russia was not acting alone.

President Poroshenko also said that Ukraine would offer no ceasefire until the separatists surrendered.

Comment: The secession by eastern Ukraine could end at any time. Only a large scale, open Russian military intervention could change the military situation in favor of the separatists.