Iraq is in a Full-On Civil War Now 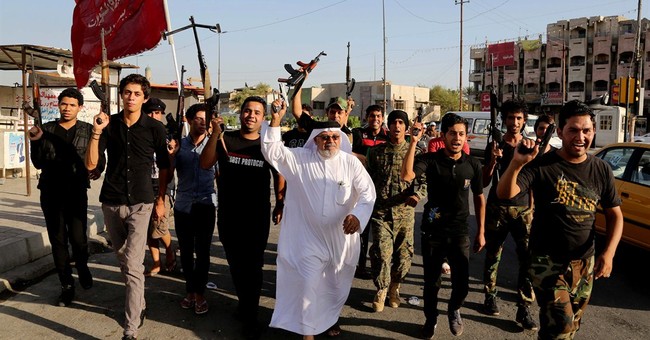 Pakistan: The nation in partial lock down. The government has tightened security nationwide, according to Pakistani media, as a precaution during the continuing counter-terrorism operations. Selected Army units have deployed to key locations in all major cities so they can act as Quick Response Forces to back up police and paramilitary forces in an emergency.

Metal detectors, body screening machines and closed circuit televisions have been installed at all major prisons. Guard forces have been reinforced. Near the Karachi central jail, for example, the Pakistan Army has deployed an armored unit to deter what the media call "a militant backlash."

The government has advised foreigners and UN staffers to limit their movement in Islamabad for the next three days and to stay away from popular shopping areas because of the threat of terrorist attacks. They also have been asked to stay in the federal capital.

Military and paramilitary forces have tightened security along the Pakistan-Afghanistan border to prevent terrorists from fleeing into Pakistan. Pakistan asked the Afghan National Army and Afghan Border Police to seal the border on their side and to engage any terrorists who try to flee, especially into Konar and Nuristan provinces of Afghanistan.

Comment: With the onset of the anti-terror operations, the Pakistani Taliban warned foreigners to leave Pakistan or risk becoming targets. The extra precautions at prisons throughout the country mean that the government has intelligence that Pakistani Taliban groups intend to attempt jail breaks to free fellow fighters.

The measures constitute a security lock down of the most likely targets for terrorist attacks. They are significant because they feature extensive, if not unprecedented, coordination among the Army, the various paramilitary forces and the police in each province and in the major cities. Improved coordination might reflect lessons learned from the operations at Karachi international airport in which Army units in coordination with the various police forces limited the attack and prevented an aircraft hijacking.

Security authorities apparently judge the next three days to be the window for the Pakistani Taliban to retaliate.

In combat action, the armed forces reported having killed 187 terrorists since the operations began. Air strikes killed most. Eight Pakistani security forces have died in the fighting in North Waziristan Agency.

Success in North Waziristan depends heavily on operational security. Almost all past operations in the tribal agencies have been compromised by operational leaks or undermined by Taliban sympathizers in the security forces and in Pakistani intelligence.

Iraq: Situation update. Prime Minister al-Maliki announced that he fired four top army commanders because they failed to halt advances by Islamic State in Iraq and the Levant (ISIL) fighters. The commanders responsible for Mosul's defense are among those relieved. One will face a court martial.

In Baghdad, al-Maliki rejected advice that he make reconciliation overtures to ISIL and other Sunni groups. His spokesman said there is no reconciliation; this is war.

The Muslim Scholars Association said Imam Nihad al Jibouri and two of his aides were found to have been executed after being abducted four days ago by Shiite militiamen dressed as security forces. Their bodies were found in a morgue. The Association promised that these crimes won't go unpunished.

Other reports. The Baiji oil refinery, Iraq's largest, was shut down overnight on 16 June after militants attacked the refinery with mortars. On Monday, ISIL reportedly agreed to comply with a request from local tribal leaders to not attack the refinery. Damage to the refinery has not been reported.

News reports about the status of the city of Baqubah have been contradictory. The BBC and other services reported rebels captured the city, which is 60kms (37 miles) from Baghdad. Government sources said, however, that Iraqi forces rallied and held the town. One spokesman told the press that 65 terrorists were "pre-emptively killed." ISIL had attempted to free them from prison. Another Baghdad spokesman said the actual number was 52 dead, all killed by an ISIL mortar round.

The General Military Council of the Iraqi Revolutionaries, a neo-Ba'athist and anti-American insurgent organization, announced it will continue to fight Baghdad's forces and Iranian elements. The group reportedly intends to cooperate with ISIL until the al-Maliki government is overthrown. One source reported it contains 10,000 fighters, but the number is not confirmed.

Comment: Within the past 48 hours, news reporting outlines the shape of a Sunni rebellion and civil war. Sunni tribes, the residual Ba'athists and other groups have risen under the leadership of ISIL. ISIL is reported to have already set up Sharia courts to administer the major cities that it controls.

Power is now shared, de facto, between the government and ISIL and its allies. Force of arms achieved this condition, making this a civil war.

The start of the sectarian killings is no surprise, after Grand Ayatollah Sistani's call to arms. However, it foreshadows the darkest possible turn of this fighting. The militias kill civilians indiscriminately.

On the other hand, in accordance with its agreement with the Kurdistan Regional Government, the Iraqi government announced that it will allow Peshmerga to remain in disputed areas, including Kirkuk and Mosul.

Comment: Both sides are wooing the Kurds for their support. The autonomy agreement for Kurdistan allows the Kurdish forces to assume security responsibilities in areas abandoned by Iraq forces. The government's announcement is a trifle presumptuous. The Kurds, thus far, are beneficiaries of the civil war.

Kenya: Another attack. Suspected Somali terrorists killed nine people on the night of 16 June in the same coastal town they attacked on Sunday.

Kenyan President Kenyatta, a Kikuyu, rejected al Shaba'ab's claim of responsibility for Sunday's murders. He blamed the killings on his arch political rival Raila Odinga and his Luo tribal supporters.

"The attack was well-planned, orchestrated and politically motivated ethnic violence against the Kenyan community with the intention of victimization for political reasons. This, therefore, was not an Al-Shaba'ab terrorist attack," Kenyatta said.

Comment: Eastern Kenya contains many Somali-speaking refugees, traders and smugglers. The back-to-back attacks are likely to lead to tribal reprisals against Somali speakers.

Nigeria: Another attack. A suicide bomber detonated a tricycle taxi packed with explosives at an outdoor venue for watching World Cup soccer matches at a town in northeastern Nigeria. At leat 15 people died.

Comment: The government warned that such venues would be targets for attack, but seems to have done nothing to improve their security, except ban watchingWorld Cup matches in some towns.