Syrians Overwhelmingly Vote for Assad to Remain in Power 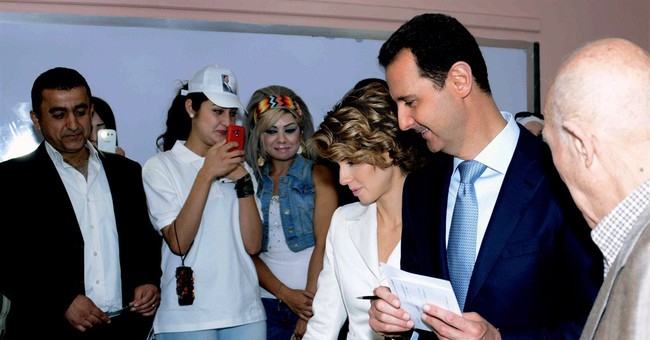 Syria: The Speaker of the People's Assembly, Mohammad Jihad al-Laham announced Wednesday that Dr. Bashar Hafez al-Asad was elected President of the Syrian Arab Republic for a third seven-year term.

Comment: The outcome was foreordained, but the election is interesting and significant. One Syrian commentator pointed out that this was the first election in which the Ba'ath Party in Syria allowed more than one candidate's name on the ballots.

The election numbers are noteworthy because the Syrian voters gave Asad a much stronger vote of confidence than the Egyptian voters gave President-elect al-Sisi. Plus, people voted despite the fighting.

The Supreme Constitutional Court announced that the number of registered voters was 15,845,575. This number apparently includes voters in combat zones because the CIA World Factbook lists Syria's total population as 17,951,639 people. It also includes Syrians outside the country.

This turnout would be impressive in the US, where there is no civil war. It far exceeds the Egyptian turnout in percentage terms. In Egypt, 25,578,233 votes were cast in the presidential election, representing 47.5% of the registered voters.

The point is the civil war gave voters the option and justification to not vote, which the Opposition wanted. Nevertheless, they apparently chose to participate.

Several points stand out. The Syrian opposition and the fighting failed to disrupt the election. Syrian Arabs wanted to vote and did. Despite what Western media reported, the election was held in contested areas, including districts of Aleppo.

One opposition leader told the press that he could not understand why Syrians voted so heavily for Asad, instead of just boycotting the election. One voter said he voted for Asad because he represents order and the opposition does not.

If these views are representative, then this election represents a referendum on the opposition's failure to present an alternative to the Ba'athist government in Damascus. In three years of fighting, the Syrian opposition groups have failed to build a popular base of support.

Some US diplomats have disparaged this election as meaningless, but such facile judgments do a disservice to the more than 11.6 million Syrians who voted. This is a study in democracy.

Ukraine: The security situation has changed little, but the offensive by Kyiv's forces continues.

"We have bases where we shall train and arm those mobilized," according to Donetsk prime minister Aleksandr Borodai. He also said that all those mobilized" will be released from work and their jobs will be preserved." He warned that "an assault on Donetsk will start soon."

Libya: A suicide bomber attempted to assassinate General Hifter in Benghazi today. "A suicide bomber in a vehicle packed with explosives attacked a villa where we had gathered," according to General Sagr al-Jerushi, who heads the air wing that supports Hifter's forces. "Three of our soldiers were killed," Jerushi said.

Comment: This was the first attack on Hifter since he announced "Operation Dignity" on 16 May. Hifter's operations might fail in any event, but without Hifter they certainly would.

Nigeria: Local Nigerian sources said that heavily armed gunmen raided four villages in northeast Nigeria yesterday. Dressed as soldiers, the gunmen arrived in all-terrain vehicles and on motorcycles to attack the villages of Goshe, Attagara, Agapalwa and Aganjara in the Gwoza district of Borno state, late on Tuesday.

"There were deadly attacks on these villages by Boko Haram insurgents who killed a large number of people and destroyed homes," according to lawmaker Peter Biye, who represents the area in the federal parliament.

"We are still trying to compile a toll of the dead, as people on the ground are still counting the number of casualties."

Biye also said, "Boko Haram have hoisted their flags in at least seven villages in the area which they now claim to be under their control."

On Monday, Boko Haram fighters, posing as soldiers, also killed Christians whom they had herded into a church, supposedly for their safety. News services reported up to 30 people were killed in six raids on Monday and Tuesday.