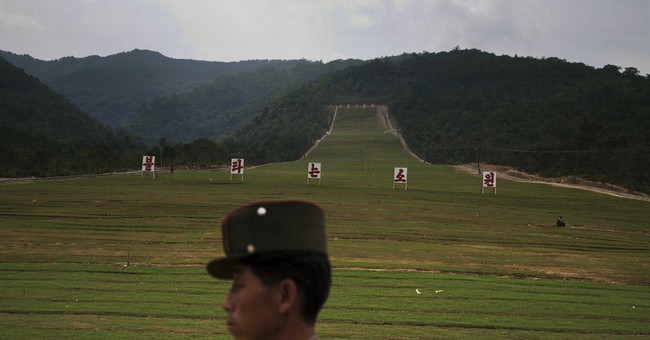 North Korea: South Korean intelligence confirmed on 8 October that North Korea has restarted its 5MWe nuclear reactor at Yongbyon. The National Intelligence Service (NIS) told lawmakers from the National Assembly's Intelligence Committee that the graphite-moderated reactor has been in operation since around August of this year.

Comment: The South Koreans are the first government to confirm what has already been reported by the experts at Johns Hopkins. The US has made no statement of confirmation.

NightWatch has reported in several editions that North Korea's charm offensive was ending. The start of the change corresponds to the renewed push for Six Party nuclear talks. Since July the North has tested a large rocket engine and restarted the Yongbyon reactor. Uranium enrichment has certainly continued. Those developments form the backdrop for new talks.

North Korea-US: On 7 October, the Korean Central News Agency (KCNA) broadcast a statement in reaction to the arrival of the USS George Washington at Pusan (Busan), South Korea. (Bold font added by NightWatch.)

"The situation on the Korean Peninsula, which had been easing as a result of our patient efforts, is once again rushing straight toward deterioration. Such a trend of the situationis directly attributed to the continuous anti-Republic military confrontation maneuvers of the US and Japanese aggressors and the South Korean puppets."

"As already reported, at dawn on 4 October, a nuclear-powered carrier strike group of the Navy of the US imperialist forces of aggression, which participated in the combined maritime exercises secretly aiming at our Republic that have been underway in the East Sea of Korea (the Sea of Japan) since 30 September, once again made its way into Busan Port."

"This strike group is composed of the super-large nuclear-powered carrier USS George Washington carrying about 100 nuclear bombs aboard, countless guided-missile destroyers, cruisers, submarines, escort warships, and the like…."

"The gravity of the situation lies in that all continuing military movements have been timed to coincide with the adoption of what is called tailored deterrence strategy premised on a preemptive strike on us between the master and its tool.

"Regarding this, the units of all services and army corps level of the Korean People's Army received an emergency order from its supreme command to reexamine the operational plans already ratified and maintain mobilization readiness to promptly launch operations at any time, while vigilantly monitoring every move made by the US and Japanese aggressors and the puppets."

"The United States should bear in mind that as the US imperialist aggressive forces' nuclear strike means, including the nuclear-powered carrier, enter the air above the vicinity of the Korean peninsula and waters off it more frequently and deeper, it will bring about an unexpected horrible disaster without a doubt."

"The United States should clearly be aware of the fact that our people and army are equipped with full alert posture to promptly smash and confidently counter the sinister provocation maneuvers of any hostile forces in the world with our own powerful military strength."

Comment: The bold face language signifies an increase in combat readiness. This is a low level alert, but it is similar in nature to the North's heightened combat readiness when US B-52 bombers flew to South Korea in March.

If the North is looking for an excuse to decline to participate in talks, this would be it. NightWatch judges that is the North's intent and expects a steady "deterioration" in security conditions on the Peninsula.

North Korea-Switzerland: For the record.The Swiss government has stopped a $7.7 million deal by a Swiss company to export to North Korea ski lifts for the new ski resort that Kim Jong Un has ordered in northeastern North Korea. North Korea is unable to manufacture them and Kim Jong Un attended school in Switzerland.

The Swiss stopped the deal because of UN sanctions that bar imports of luxury goods. In reaction, KCNA declared, "This is an intolerable mockery of the social system and the people of the DPRK and a serious human rights abuse that politicizes sports and discriminates against the Koreans."

Comment: The ski resort is one of the highest priority national construction projects because Kim Jong Un ordered it. This is a big deal.

Afghanistan: In an interview with the BBC which aired on 7 October, President Karzai strongly criticized the NATO military campaign in Afghanistan. "On the security front, the entire NATO exercise was one that caused Afghanistan a lot of suffering, a lot of loss of life, and no gains because the country is not secure."

"I am not happy to say that there is partial security. That's not what we are seeking. What we wanted was absolute security and a clear-cut war against terrorism."

He also said the NATO leadership fought the wrong war. He said initially, relations with the US were good. "In those beginning years there was not much difference of opinion between us".

"The worsening of relations began in 2005 where we saw the first incidents of civilian casualties, where we saw that the war on terror was not conducted where it should have been."

Mr Karzai said the war should have been conducted "in the sanctuaries, in the training grounds beyond Afghanistan, rather than that which the US and NATO forces were conducting operations in Afghan villages, causing harm to Afghan people."

Comment: Karzai has only six months left in his presidency. His desire to leave a memorable legacy is the impulse for statements critical of the US-led NATO effort. To establish any kind of credibility in a post-NATO Afghanistan, he must not appear in talks with the Taliban to be a US puppet. Karzai came from the Taliban and must deal with them after the last Western soldier leaves, just as the Taliban have always predicted.

One particularly frustrating point that he and his generals have made repeatedly is that the US never attacked the leadership of the Taliban in Quetta or Karachi, their training sites and especially their logistics and financial resources which have been located in Pakistan since 2001. No serious military effort could succeed for long in Afghanistan while the Taliban found safety, thrived and flourished openly in Pakistan.

No experts have explained why the Afghan Taliban were never so much as harassed in Pakistan. No investigative journalists have discovered what secret deals were made with the Musharraf regime or the Pakistani intelligence services to keep it that way for 12 years.

Sudan: Update. A government spokesman said on 7 October, "Peace is finally returning to all the cities. We shall not waver in our efforts to restore order." Yesterday's anti-government demonstration in Khartoum involved less than a 100 people.

Comment: Using a combination of force and cash payments to half a million families, the government ended the demonstrations. The side with the guns and with control of cell phone service won.

Mali: Update. Islamic militants set off explosions at two bridges that cross the Niger River near Gao, in northeastern Mali. A local councilor for the Gao region said that militants "wearing turbans" arrived by motorbike at the bridges before blowing them up.

A police source said that there are two bridges at the location of the explosions and only the older one was destroyed, while the new one was only slightly damaged.

Comment: Late reports indicate Monday's attack in Gao was a mortar attack. A militant group affiliated with al Qaida in the Islamic Maghreb claimed responsibility for the bridge attack. The group has at least one mortar team and an explosives team.