Garbage In, Garbage Out: Bad Data Led to an Obamacare Disaster

Nick Stehle
|
Posted: Jan 29, 2020 12:01 AM
Share   Tweet
The opinions expressed by columnists are their own and do not necessarily represent the views of Townhall.com. 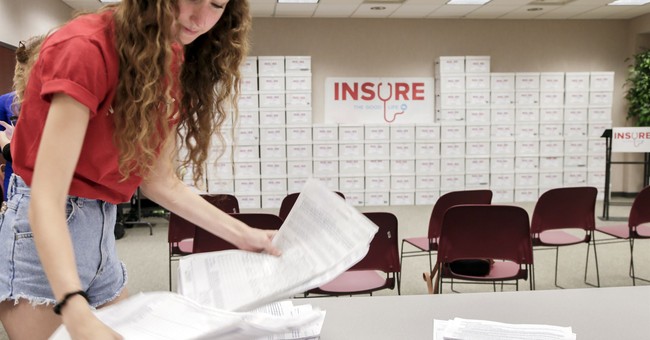 Medicaid was created to be a safety net for the truly needy such as seniors, people with disabilities, and low-income children. Most of us agree: It is important to protect this program for the people who need it most.

Unfortunately, many politicians have lost sight of Medicaid’s intended purpose. In doing so, they took limited resources meant for truly needy individuals and moved millions of able-bodied adults—the majority of whom do not work at all—to the front of the line instead. Meanwhile, hundreds of thousands of people with developmental disabilities and other conditions remain trapped on waiting lists, hoping to someday get access to desperately needed services.

This is happening because of ObamaCare’s Medicaid expansion. Under ObamaCare, lawmakers have the option to expand welfare to able-bodied adults in their states. Far too many states made the tragic decision to expand their Medicaid programs, causing enrollment surges. These enrollment surges far surpassed projections—resulting in far more newly eligible welfare enrollees than policymakers promised taxpayers in their states. Sadly—as is often the case with massive, ill-advised expansions of government—it is the taxpayers who are left footing the (enormous) bill.

When it comes to ObamaCare expansion, policymakers, as well as taxpayers, deserve to know why these over-enrollments keep happening. A new report from the Foundation for Government Accountability (FGA) answers that exact question.

According to the report, the main reason states so badly underestimated enrollment is their reliance on Census Bureau data to make estimations. This data does not work for projecting expansion enrollment for multiple reasons.

First, the Census Bureau defines ‘households’ differently than the Medicaid program. For example, for an able-bodied adult who lives at home with his parents and does not work, Census data counts his parents’ income to determine his poverty status. The result is that Census data would indicate that he is not eligible for expansion. But after ObamaCare expansion, his state might learn the hard way that he is eligible because Medicaid eligibility is based on his personal income only. Oops. The enrollment overruns begin.

The Census Bureau also defines ‘income’ differently than Medicaid does. The Census, for example, considers cash welfare as income. Medicaid, however, excludes cash welfare from income calculations, resulting in more people appearing to have lower incomes and thereby qualifying for Medicaid. Oops again.

Finally, there are differences in how the Census Bureau and Medicaid define poverty because the Census Bureau evaluates more data points that could result in a person no longer being under the threshold required to receive Medicaid benefits under expansion.

But ultimately, perhaps most alarming, are differences in data collection. While Medicaid eligibility is determined by tax filing data—cold, hard facts—Census Bureau data is based on income information that is self-reported in a survey. You read that correctly: Critical decisions about whether or not to expand Medicaid to hundreds of thousands of people are routinely being made based on polling data.

Medicaid expansion is shattering projections and creating a welfare trap for more than 12 million able-bodied adults. Regrettably, taxpayers and the truly needy will continue to pay the price. The takeaway for states that have rightly rejected expansion is simple: don’t trust the numbers. If your state is looking at expansion enrollment estimates, they are relying on Census data—and they’re preparing to replicate this nightmare.

Nick Stehle is a senior research fellow at the Foundation for Government Accountability.