Stockman Calls Out Boehner Gambit to Save Amnesty Agenda 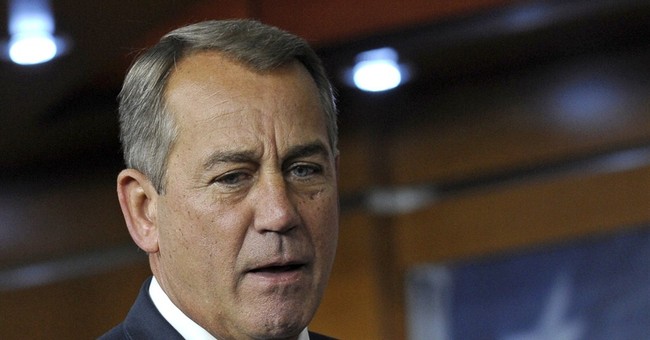 The Texas congressman, who abstained from voting for Speaker John A. Boehner, exposed the true motivation behind the speaker’s drive to ignore the Senate’s amnesty bill for illegal aliens and pass a House-originated bill.

Rep. Stephan E. Stockman (R.-Texas) said after a July 10 closed-door Capitol Hill meeting with Republican members, he learned that Senate Majority Leader Harry Reid refused to transmit to the House an amnesty bill, S. 744, which passed the Senate two weeks ago, fearing it will be dismissed on a “blue slip” resolution.

“Even Harry Reid now admits the Senate’s amnesty bill is unconstitutional and cannot become law. Any bill that raises revenue must start in the House” said Stockman.

In regular order, the House and Senate pass bills and representatives from both chambers meet in a conference committee that produces a single bill that is sent to President Barack Obama, after it that bill passes both chambers.

The worry among Capitol Hill conservatives was that Boehner would take any House-passed bill with the word “immigration” in it and set up a conference that would produce a bill with the trappings of compromise that would be politically difficult to oppose.

A blue slip resolution would mean the House does not recognize the Senate’s bill, so there can be no conference.

A “blue slip” is a resolution that automatically returns to the Senate any bill that violates the “origination clause” of the Constitution, Stockman said.

The origination clause states: “All Bills for raising Revenue shall originate in the House of Representatives.” The name comes from the blue paper the resolution is traditionally printed on. Blue slip resolutions are immediately considered as a matter of constitutional privilege, are debatable for an hour and are not subject to amendment.

Stockman said because Section 2102 of the Senate’s bill deals with payment of taxes and the forgiveness of taxes as part of the bill’s amnesty process, it is a tax bill.

The Congressional Budget Office validated this view, when it released if June 18 analysis of the Senate bill and determined it would generate $459 billion in new revenue in its first 10 years.

The Texas congressman warned Boehner and the GOP leadership in a June 28 letter that the Senate’s bill was subject to a blue slip.

“Not only is the Senate amnesty bill an abuse of taxpayers and immigrants, it’s utterly unconstitutional. The Senate cannot invent its own amnesty taxes,” wrote Stockman.

“I hope Speaker Boehner will immediately kill the amnesty bill through a constitutionally-required blue slip. As long as the amnesty bill sits in the House it poses a threat to taxpayers and immigrants,” he wrote. “By creating their own amnesty taxes Senate Democrats broke the rules. Senate Democrats were so hell-bent on ramming through a gift to radical political activists they didn’t bother to check if it was even legal.”

It was not until the members’ meeting that Boehner confirmed to all Republican congressmen the Senate bill was subject to blue slip and a new House bill was the only way to give President Barack Obama and the Democrats the amnesty bill they promised their supporters and contributors.

“They got caught trying to sneak an illegal bill past the Constitution’s borders,” said Stockman.

In a joint statement by Boehner and other members of the Republican leadership, the speaker portrayed his bailing out the Democrat’s amnesty bill as a tough stand.

“Today House Republicans affirmed that rather than take up the flawed legislation rushed through the Senate, House committees will continue their work on a step-by-step, common-sense approach to fixing what has long been a broken system, the speaker said in his statement.

Even going so far as to say he like other Americans did not trust the Obama to enforce the borders as promised: “The president has also demonstrated he is willing to unilaterally delay or ignore significant portions of laws he himself has signed, raising concerns.”

Concerns are powerful things, but not powerful enough to stop Boehner, whose political contributions jumped from $9 million in 2010 to $22 million in 2012 after the Tea Party movement delivered him the House majority that made him speaker, from risking his speakership and majority for an amnesty bill the American people do not want.