How To Solve The Gas Panic 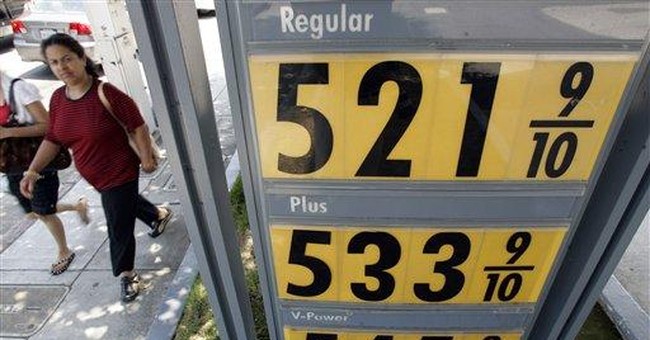 First ... If you're not from Atlanta or any other area where about one out of five gas stations is open and the lines are 90 minutes and more, read this story.  If you like this kind of stuff you can read this one too.  Things are tough, and have been for about six days.  Friday morning I was out there at 3:30 a.m. looking for gas for my car.  Now after you’ve finished reading about Atlanta’s problems (problems shared with many other Southeastern cities) you can click here to read about how nearly 200 gas stations in Atlanta are being investigated for price gouging.  Don’t investigate them!  Reward them!  Price gouging is exactly what we need!  It should be encouraged, not investigated.

OK ... now that you've finished your reading assignments, I shall tell you how to solve this problem QUICKLY.  Not painlessly .. but fast.

The real problem now is panic buying.  People will run their tanks down by about one-third and then rush off to a gas station.  Lines of cars are following gas tanker trucks around Atlanta. The supplies are coming back up, but as long as people insist on keeping every car they own filled to the top and then filling a few gas cans to boot, we're going to have these outages and these absurd lines.

So, how do you stop the panic buying?  Easy.  You let the market do what the market does best, control demand and supply through the price structure.  The demand for gas outstrips the supply right now, so allow gas stations respond by raising the price of gas .. raise it as much as they want.  I’m serious here so stop your screaming.  The governor should hold a press conference and announce that effective immediately there is no limit on what gas stations can charge for gas.  I heard that there was some gas station in the suburbs charging $8.00 a gallon.  Great!  That’s what they all should be doing.  Right now the price of gasoline in Atlanta is artificially low and being held down by government.  That’s exacerbating the problem, not helping it.  Demand is not being squelched by price.

As the prices rise, the point will be reached where people will say "I’m fed up with this.  I'll ride with a friend, take the bus or just sit home before I'll pay this for a gallon of gas."  Once the price of a gallon starts to evoke that kind of reaction, we're on our way to solving the problem.  When gas costs, say, $8.00 people aren't going to fill their tanks.  They also aren't going to rush home to get their second car and make sure it is filled up either ... and you can forget them filling those portable gas cans they have in the trunk.  Some people will only be able to afford maybe five gallons!  Fine!  That leaves gas in the tanks for other motorists.  Bottom line here is that people aren’t going to rush out to fill up their half-empty tanks with $8.00 gas.  Instead they’ll buy only what gas is absolutely necessary, and then wait for the prices to come down.

As the price drives people away from the pumps, the tanker trucks will have the opportunity to fill every underground tank at every gas station in the area.  Then, when the tanks are all full again, the gas station operators will start looking around wondering where in the world their customers are.  One by one they'll start lowering the price of a gallon in order to attract customers back to the pumps.  Yup .. it will be time for a good old fashioned gas war.  As the prices fall people will come out of their garages and find that they can fill up without waiting and without the station running out.  Once they feel that the shortage is gone they’ll resume normal behavior and the prices will come down to pre-shortage levels.

Oh, sure.  People will yell and scream about the so-called "price gouging" on the part of the stations.  They’ve been taught this by politicians.  Pundits … especially those on the left … will start blathering about “greed” and demanding regulations.  Pelosi will probably emit a screech or two about windfall profits taxes.  The truth is there is nothing inherently wrong with the free market responding to these shortages with the best device known to man for allocating scarce resources.  Prices.

Politicians can do all the grandstanding they want ... and work for face time on the television decrying those evil people trying to make a profit off of a scarce resource.  That seems to suit them just fine.  But if they really want to end this nonsense they'll turn the marketplace loose and get the hell out of the way.