Myra Kahn Adams
|
Posted: Apr 04, 2021 12:01 AM
Share   Tweet
The opinions expressed by columnists are their own and do not necessarily represent the views of Townhall.com. 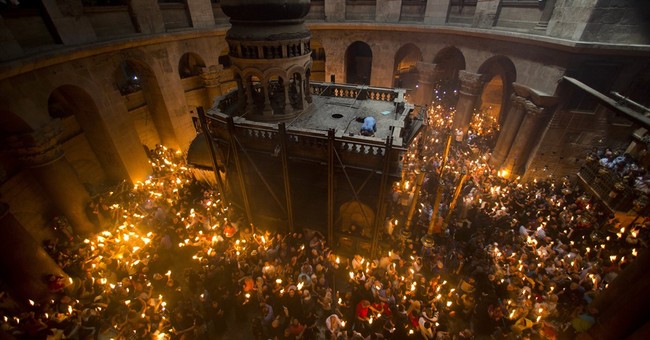 Source: Christian Orthodox pilgrims hold candles during the Holy Fire ceremony in the church of the Holy Sepulchre, traditionally believed to be the burial site of Jesus Christ. AP Photo/Dusan Vranic

Today we celebrate the Resurrection of Jesus Christ — the world’s greatest miracle that changed the course of human history. If you do not believe the Resurrection happened, that is your opinion, but it did happen, and what follows is supporting evidence.

The Resurrection is a gift that keeps on giving from God to humanity. Jesus explained this gift: “For God so loved the world that he gave his one and only Son, that whoever believes in him shall not perish but have eternal life” (John 3:16).

That familiar verse is the foundational doctrine of faith — believing in Jesus as the source of God’s love, hope, and forgiveness of sin — to spend eternity with Him. If your life is searching for meaning, pray and ask Jesus to be with you now as you reread His words.

Since Jesus’s tomb was empty, here is an Easter question for nonbelievers: If Jesus was NOT resurrected, what happened to His body? Matthew, the Jewish Gospel writer, describes the lingering concerns of Jerusalem’s Jewish leaders:

"The chief priests and the Pharisees went to Pilate. 'Sir,' they said, 'we remember that while he was still alive that deceiver said, ‘After three days I will rise again.’ So give the order for the tomb to be made secure until the third day. Otherwise, his disciples may come and steal the body and tell the people that he has been raised from the dead.' This last deception will be worse than the first” (Matthew 27:62-66).

Pilate agreed — guards were posted, the tomb sealed, but neither could stop God’s powerful plan of salvation:

"After the Sabbath, at dawn on the first day of the week, Mary Magdalene and the other Mary went to look at the tomb. There was a violent earthquake, for an angel of the Lord came down from heaven and, going to the tomb, rolled back the stone and sat on it. His appearance was like lightning, and his clothes were white as snow. The guards were so afraid of him that they shook and became like dead men. The angel said to the women, 'Do not be afraid, for I know that you are looking for Jesus, who was crucified. He is not here; he has risen, just as he said'" (Matthew 28:1-8).

What happens next is a 1st-century political cover-up and pay-off scheme:

"The Guards went into the city and reported to the chief priests what happened. The leaders devised a plan, they gave the soldiers a large sum of money, telling them, 'You are to say, ‘His disciples came during the night and stole him away while we were asleep.’ If this report gets to the governor, we will satisfy him and keep you out of trouble.' So the soldiers took the money and did as they were instructed. And this story has been widely circulated among the Jews to this very day" (Matthew 28:11-15).

Although the scheme averted a political and religious crisis, His body was never found — “evidence” of an unusual occurrence. If the leaders had identified His body, they would likely have publicly celebrated, proving that Jesus was a “deceiver” and not the Savior of Israel. Furthermore, their “triumph” might have been chronicled by a Jewish historian. But, ironically, a Jewish historian recorded the true story. His name was Flavius Josephus, who wrote Antiquities of the Jews around AD 93. Josephus’s account of Jesus, the “Testimonium Flavianum,” appears in Book 18, Chapter 3, 3:

“Now there was about this time Jesus, a wise man, if it be lawful to call him a man; for he was a doer of wonderful works, a teacher of such men as receive the truth with pleasure. He drew over to him both many of the Jews and many of the Gentiles. He was [the] Christ. And when Pilate, at the suggestion of the principal men amongst us, had condemned him to the cross, those that loved him at the first did not forsake him; for he appeared to them alive again the third day, as the divine prophets had foretold these and ten thousand other wonderful things concerning him. And the tribe of Christians, so named from him, are not extinct at this day.” (Love the ending. Christians are not “extinct” because Jesus lives!)

Writing that Jesus “appeared to them [disciples] alive again the third day,” Josephus confirms the four Gospel accounts of the disciples’ meetings and teachings with the resurrected Jesus. Most notable is Jesus’s teaching before ascending to Heaven — “The Great Commission” discussed in Vol. 12. His last sentence is relevant for today: “And surely I am with you always to the very end of the age” (Matthew 28:16-20).

More “evidence” is in the New Testament chapter, 1 Corinthians, where Paul wrote that Jesus appeared to over 500 people after his Resurrection.

But what if you don’t believe Josephus or the biblical evidence for Christ’s Resurrection? Here is my answer: “For God so loved the world”… He left physical evidence of Jesus’ suffering and death with a “photographic” image detailing how Christ looked a nanosecond before His Resurrection. This "evidence" is known as the Shroud of Turin — a 14-foot linen cloth that Peter and John found “lying there” in the empty tomb and “believed ”Jesus had risen (John 20: 1-9).

Millions worldwide also believe this is the burial Shroud that initially belonged to Joseph of Arimathea when he and Nicodemus wrapped the body of Jesus on Good Friday. A second cloth is also mentioned in the tomb: "The handkerchief had been around His head, not lying with the linen cloths" (John 20:6-8). The handkerchief is more physical evidence that authenticates the burial Shroud.

Some Bible translations’ verses about the empty tomb show the burial cloth as plural and mention “linen strips.” Those cloth strips were likely used to bind the 75 pounds of spices to the body within the burial Shroud.

Know that the Shroud of Turin cannot be dismissed because it remains the world’s most studied artifact and continues to baffle scientists due to its multitude of mysterious properties. Its blood-stained, rust-colored, anatomically correct, continuous, front-to-back image of a naked, crucified man has yet to be replicated.

In 1898, there was a startling discovery when the cloth was photographed for the first time. In the darkroom, what developed was a black and white "positive" image clearly showing every unique mark of torture described in the biblical accounts and endured by only one man in history — Jesus Christ. That means the naked eye sees the Shroud as a "photo-negative" image, while the "positive image" is hidden and unexplainable — only one of the cloth’s great mysteries.

Take the time to learn about all the Shroud’s unexplained properties. And ask yourself, “Did God leave physical evidence of HIS greatest miracle for unbelievers to have faith in the Lord Jesus Christ? Meanwhile, understand that those with faith don't "need" the Shroud to believe. Instead, the Shroud is revered as miraculous, visual confirmation of the Gospel accounts of His suffering and death, revealing what Jesus looked like before His Resurrection.

All the evidence discussed throughout points to what believers already know in our hearts: He has risen! He lives! He loves us! Cue the Alleluia!