Mylie Biggs
|
Posted: May 19, 2022 12:01 AM
Share   Tweet
The opinions expressed by columnists are their own and do not necessarily represent the views of Townhall.com. 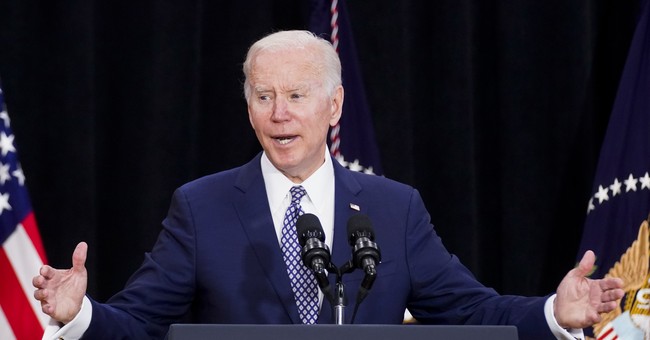 As a current college student, I can attest that attending college today is expensive and, for many students, impossible without taking out a loan. Borrowing money means taking on the responsibility of repaying it. Multiple student loan forgiveness plans have been proposed by Democrats, including Sen. Elizabeth Warren, Sen. Bernie Sanders, and President Joe Biden, which would allow students to forgo their financial responsibilities.

President Biden plans to forgive at least $10,000 worth of loan debt for every student making less than $125,000 per year after college–more than $1 trillion total. But there are no other details yet. How does the president plan to explain to Americans that they have to start paying for every student’s debt? Beyond that, how can one generation have their loans forgiven while the next doesn’t? Or will all future students have their loans forgiven?

College is a time to learn to take responsibility for your own actions and understand the value of hard work and earning something on your own. For many students, figuring out how to pay for college is the first major financial decision they make in life. Taking out loans and expecting debt to be canceled sets a precedent for relying on others, and creates an unrealistic expectation for future responsibilities.

College is not a right, and whether to attend or not is entirely contingent upon individuals’ merit and choice, along with the corresponding responsibilities.

Many college students today are in favor of loan forgiveness. After all, it sounds great not to have to pay your debts. But this is a selfish view; it is a shortsighted perspective that will eventually backfire on college students and their families. It is easy to look at a current situation and want the quickest and easiest solution without thinking of the repercussions.

Knowing that loans will be forgiven, it’s not far-fetched to assume that more people will choose to attend college. Tuition prices will undoubtedly rise, placing a heavier burden on students who work to pay for college. Those who made the economic decision to skip or delay college and enter the workforce will find themselves paying higher taxes to account for others’ decisions to attend college.

While college can be valuable, more people attending college does not necessarily mean that we will have a stronger or more intelligent society. As Elon Musk said,  “I hate when people confuse education with intelligence. You can have a bachelor’s degree and still be an idiot.”

Canceling student loan debt is also a massive giveaway to the wealthy and privileged.  Nearly half of all outstanding student loan debt is owed by people with graduate degrees. It’s no secret that people with graduate degrees make more than those without, on average. This means that graduate degree holders are more likely to be in  a better position to repay their student loans than those two-thirds of Americans without college degrees who would be left to foot the bill. If  Democrats really cared about helping the average American, they would not be pushing to forgive the loans of those who are typically better-off.

The political Left is all about “forgiveness” and “kindness,” but everything they do seems to benefit one group at the expense of another. Student loan forgiveness is no different—a textbook example of robbing Peter to pay Paul. Loan forgiveness seems like a nice idea on the surface but it has an  ugly underside filled with negative consequences. It makes me question if these Democrats in power actually want to help Americans.

For all former, current, and future college students, your debt is your own, my debt is my own. Why choose a socialist collective “solution” to a problem that is distinctly individual?

Like putting a bandaid over a crack in a boat, this short-term “solution” will not hold. Biden is hurting many to please a few. Student loan forgiveness will fuel inflation, raise taxes, and redistribute responsibility.

On an individual level, I have always been taught to take responsibility for my own actions. I want to be accountable for my own choices. I want to feel empowered by my hard work. This desire is encapsulated in a quote from psychologist Jordan B. Peterson: “The way that you live properly so that you can withstand the nature of your own being is to pick up a load that’s heavy enough so that if you can carry it you have some self-respect.”

Mylie Biggs is a policy intern at FreedomWorks and an undergraduate student at the University of Arizona.