Mona Charen
|
Posted: Nov 09, 2018 12:01 AM
Share   Tweet
The opinions expressed by columnists are their own and do not necessarily represent the views of Townhall.com. 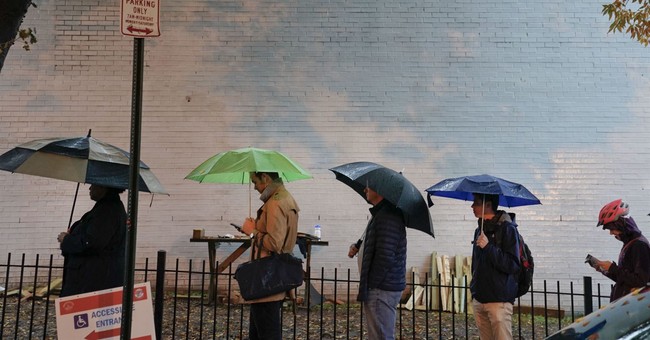 Exit polls aren't always 100 percent reliable. For example, in 2016, the exit interviews suggested that Donald Trump would lose Florida, Wisconsin, Pennsylvania and North Carolina by small margins. He won all of them.

Let's take it as given that 2018's exit polls are likely flawed in the same way. Still, they are among the most interesting polls because they reflect the views of actual voters -- not "registered" or "likely," but the real McCoy. Margins of error we shall always have with us, but they shouldn't stifle all punditry.

Some of the data about this year's crop of voters is similar to what we've seen in past contests, but there are some trends that should give both Republicans and Democrats cause for reflection.

A majority of voters (56 percent) were over the age of 50. This helped Republicans, as older voters skew more Republican. But it didn't help as much as it could have: Even among older voters, enthusiasm for Republicans was muted. Of those ages 50 and above, only half gave their votes this year to a Republican candidate. Among the younger set, by contrast, lopsided percentages voted for Democrats. The 18- to 24-year-olds gave 68 percent of their support to Democrats. Among 25- to 29-year-olds, 66 percent voted Democrat. It was 59 percent among voters in their 30s and 52 percent among those in their 40s.

Another reliable group for Republicans has been married adults. Fifty-two percent of married voters chose Trump in 2016. Fifty-six percent had been Romney voters in 2012. But in 2018, the percentage of married people who voted Republican dropped to 47 percent. Now, it's possible that many Republican voters sat out this midterm and we are thus getting a skewed picture of how married voters will behave in 2020. But that's not a good sign for the party's health, either. Republicans are usually better about voting in off years than Democrats.

Many politicos suggest that elections these days are decided by riling up and turning out the base, not by persuading the middle. Maybe that's right. But if it isn't, Republicans might want to look over their shoulders at what's happening with independents. Fifty-four percent of self-described independents voted Democrat in 2018, compared with only 42 percent in 2016. Among those calling themselves "moderates," 52 percent voted for Clinton two years ago, while 62 percent voted Democrat on Tuesday.

Democrats, too, should comb these exit polls for clues to where they've gone wrong. Fifty percent of voters said Trump's immigration policies are either "about right" (33 percent) or "not tough enough" (17 percent). Portraying immigration policy as a contest between the big-hearted and the bigots is not going to serve Democrats well.

A solid 56 percent of voters oppose the suggestion that Congress should impeach President Trump. While 54 percent of voters have an unfavorable view of the president, that is nothing like the 90 percent disapproval among Democrats. Opinions of the Democratic Party aren't so hot, either. Only 48 percent have a favorable opinion of the Democratic Party (versus 44 for the Republican Party), and only 31 percent have a positive view of Nancy Pelosi.

A number of high-profile, high-octane, lefty candidates were defeated -- Beto O'Rourke, Andrew Gillum and (likely) Stacey Abrams. This should cue the Democrats to look to their right for more viable choices. In the Republican Party, alas, it was mostly the moderates who were defeated -- another artifact of Trump's rise. The sensible middle still waits for a voice.