Mona Charen
|
Posted: Nov 24, 2016 12:01 AM
Share   Tweet
The opinions expressed by columnists are their own and do not necessarily represent the views of Townhall.com. 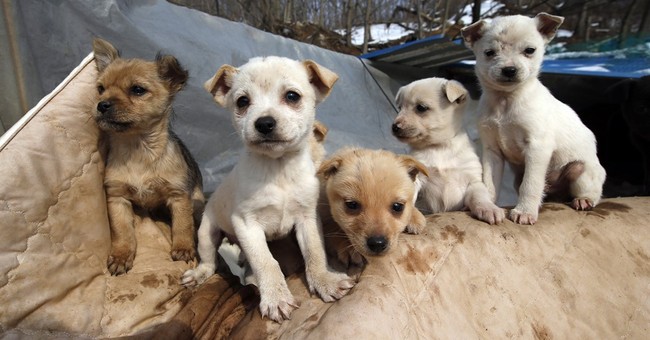 Trending
Last Thanksgiving our family had two dogs and two cats. It's looking like not long after this holiday, we'll be down to two.

Teddy, a traffic-stoppingly gorgeous Keeshond, died in May. We name our dogs after presidents. Gipper was the first. A putative golden retriever, Gipper was so aggressive and stubborn -- not traits usually associated with the breed -- that we took him to a trainer for temperament testing (the kids were young then). They did their assessments and reported back. "Your dog is not vicious, he's just a little s---."

Not Teddy. Unfailingly sweet and biddable (he never put his teeth on another creature -- not even when he was bitten on the snout by a friend's 10-week-old puppy), we almost doubted his full canine credentials. No pack instincts? No resource guarding? No. The only time I ever heard him growl was when he was old and ailing from Cushing's disease. He was sustained every day by the confidence that someone might drop some chicken scraps or a stray meatball in his food dish. And it was perfectly fine if you didn't. He would still dance in circles when you gestured at the leash. That was Teddy.

Now Gilbert, one of the cats (his brother is Sullivan), has a mass on his jaw. We had the X-rays and biopsy on Monday and will get the results next week. I always feel a bit sheepish when I tell people about the various specialists we've consulted for our pets. "Took the cat for an MRI yesterday" sounds slightly absurd, even if you love animals.

Americans spent $15.4 billion on veterinary care in 2015 (only half of it by us). The average American spends more on pets annually than on alcohol, landline phones, or men's and boys' clothing. We spend more on veterinary care for our dogs than the average person spends for his own medical care in the Dominican Republic, Egypt, India and many other countries. Even knowing that we're a devoted nation of pet lovers, it's still surreal to visit the specialists' office and see the range of possibilities on the office wall -- cardiology, gastroenterology, ophthalmology, etc, etc. We'll need the oncologist soon.

Vets always speak of the "patient," rarely the dog or cat. When Gipper needed an ACL repair (oh, yeah, ka-ching), the doctor called to give me a progress report. The "patient" was in recovery and doing well. Then the orthopedist paused, coughed, and apologized, explaining, "I had a frog in my throat." Something made me say, "Not a patient, I hope."

The world is, apparently, divided between dog and cat people. I love both. Dogs are uncanny in their understanding of us and their delight in our company. But cats are just as devoted. They may not weep with joy when we return from a one-day absence, as our current golden, Cali (that's Coolidge), unfailingly does, but they curl up in your lap and purr like a living muff. Our cats adore people -- well, me -- and if they could they would spend roughly 23 and a half hours of every 24 right next to me.

Last week, I saw that the tip of Gilbert's tongue was sticking out of his mouth. At first, I thought it was just funny, and waited for him to notice and fix it. It's not normal for cats' tongues to extend out of their mouths when they're not eating, drinking or grooming. A few days later, he did it again. And then it seemed to be out all the time. Off to the vet, who found that he had a large mass on his jaw. His gums were bright red. She referred us to the oral surgeon, and now we await the biopsy results.

The oral surgeon didn't sugarcoat it. Some cancers are more aggressive than others, but even if a tumor is benign, it can do a lot of damage if it's in the wrong place (like the brain). The jaw is one of those places. The tumor is the size of an almond.

It's Thanksgiving. I'm so grateful that my human family members are healthy and thriving. I have friends who are struggling with illness, and it seems almost unseemly to be so sad about a cat. But feelings aren't logical. Gilbert was one of a pair of stray kittens we never meant to keep. Now, I only wish we could.