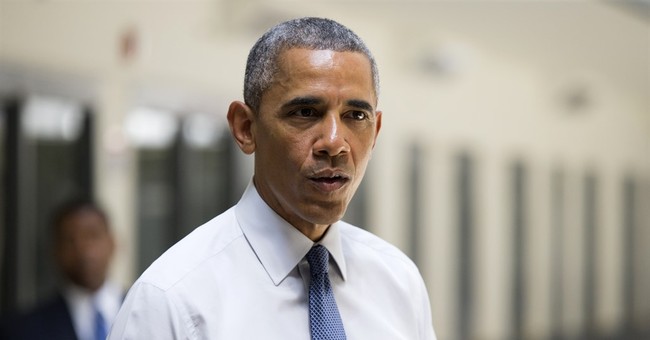 I was elected to end wars, not start them. -- Barack Obama

The quickest way of ending a war is to lose it. -- George Orwell

A question has hung in the air since Barack Obama first moved into 1600 Pennsylvania Avenue and began his "fundamental transformation" of this country: Did he intend harm, or was he merely so blinded by ideology that he could not see the damage his policies were creating? The Iran deal provides an answer.

At his press conference, our duplicitous leader chose to call black white and claim that the deal does the opposite of what it does -- allow Iran to get nuclear weapons, albeit after a decent interval. We are deep into Orwellian territory now. "War is peace. Ignorance is strength." Iranian President Hassan Rouhani is crowing that Iran achieved all of its objectives and the U.S. none.

The bombproof facility in the mountain at Fordow -- which, until recently, the U.S. had demanded be shuttered and locked -- will now have an "international presence" so that attempts to thwart its progress even by sabotage will be effectively blocked. This is permission masquerading as prevention. It's of a piece with the administration's pressure on Israel to refrain from military action, which was rewarded with Obama aides calling Prime Minister Benjamin Netanyahu a "chicken" and crowing that his chance had passed.

Permission masquerading as prevention sums up the whole deal. The U.S. had demanded anywhere/anytime inspections and negotiated to lift sanctions only after evidence of Iranian compliance. Now, the inspections regime is a joke: Iran gets 24 days' notice and sits on the committee that decides whether inspections are necessary. The sanctions are lifted immediately, handing the world's chief sponsor of terror a $100 billion windfall. Deputy National Security Adviser Ben Rhodes, who was captured on videotape in April saying anytime/anywhere inspections would be required, now denies the U.S. ever made that a condition.

While the administration claimed it couldn't negotiate for the release of four Americans held unlawfully in Iranian prisons because that was outside the scope of nuclear negotiations, they did agree to lift the embargo on conventional arms and intercontinental ballistic missiles, which were also outside the compass of nuclear concerns. Why? Because "Iran demanded it." Well, OK then.

Obama's press conference was a spectacle of bad faith. A virtuoso of lip service (see his sympathy for Israel) and endless conjurer of straw men, he took few questions but silkily implied he had answered all objections. "There is no scenario in which a U.S. president is not in a stronger position 12, 13, 15 years from now if, in fact, Iran decided at that point they still wanted to get a nuclear weapon."

What? In 12 to 15 years, Iran will be an immensely wealthier, better-armed and more powerful country than it is today. It will be, to quote Obama, "a very successful regional power" and then some. It will have acquired advanced anti-aircraft weapons and ballistic missiles and, doubtless, a much-improved air force.

The dishonest core of the president's pretense is this: that the choice was between war and diplomacy. Every schoolchild knows that diplomacy without the credible threat of force is a nullity. Obama knows how to frighten and intimidate when he wants to. See his conduct toward Republicans or Netanyahu or the Supreme Court.

There was always a very different path available. He could have increased the sanctions instead of pleading with Congress not to impose them. He could have attacked Syria when it crossed his "red line" rather than folding and thereby conveying his fecklessness to Tehran. He could have refrained from calling everyone in the U.S. who favored a hard line against Iran a "warmonger" -- again conveying that Iran had nothing to fear from him. He could have supported the protesters in the streets in 2009 rather than signaling his support for the regime. He could have left the negotiating table many times, but especially after the IAEA reported earlier this month that Iran was in violation of earlier nuclear treaties and had increased its stockpiles of enriched uranium by 20 percent. And yes, if all of the above failed, he could have deployed strategic bombing to destroy Iran's nuclear program.

But from his first inaugural address onward, Obama both secretly and openly wooed the Iranian regime. In the process, he repeatedly lied to Congress, our allies and the American people, settling, to my satisfaction at least, that he is inflicting this potential catastrophe wittingly.