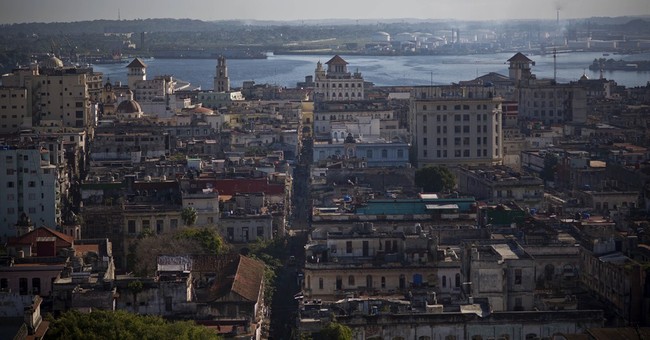 Cuban President Raul Castro has issued new demands for normalizing relations with the U.S. He wants us to lift the trade embargo, remove Cuba from the list of state sponsors of terror and give Cuba the U.S. naval base at Guantanamo Bay. Truly. You can look it up.

One can imagine President Obama being awfully tempted to give Guantanamo to them. He's planning to close the prison there piecemeal anyway. And who needs naval bases these days when, as Obama schooled Mitt Romney, "We have these things called aircraft carriers now..."?

More astonishing than the audacity of the demands is the fact that Castro thinks he's in a position to make any demands at all. Before the revolution, Cuba's average per-capita income was higher than in much of Europe. Communism brought Cuba the distinction of being the only country in the Western Hemisphere whose standard of living has steadily fallen for 50 years.

The usual Castroite excuse for Cuba's squalor and degradation (buildings are dilapidated, cars are old wrecks and prostitution is extremely widespread) is that the U.S. maintains a trade embargo. Nonsense. The rest of the world, including the European Union, Russia, India, China, Canada and Latin America, trades with Cuba and has done so forever. Want a Cuban cigar? Just drive to Canada or Mexico.

But all of that trade couldn't help Cuba, because it's communist. Cuba's crippled economy stayed afloat (more or less) through generous subsidies from the Soviet Union. In return, Cuba provided the USSR with a foreign legion, sending arms and agents to kill freedom-loving people in places like Guatemala, El Salvador, Nicaragua, Grenada, Angola and Ethiopia. When the USSR went down, many thought Cuba would soon taste liberty. But Hugo Chavez rode to Fidel Castro's rescue and supported the island dictatorship with Venezuelan oil money.

Now, with oil prices dropping below $44 a barrel and Venezuela sinking from atrocious leadership, we have Cuba over a barrel -- or we should, except that Obama has stepped into Chavez's boots, riding to the Castro brothers' rescue.

Obama negotiated with Raul Castro. Castro got full diplomatic recognition, increased travel and remittances, the return of three spies, and the promise that Obama would attempt to lift the embargo fully. Obama got an intelligence agent who worked for the CIA, Alan Gross (a State Department contractor who was wrongfully arrested and imprisoned for attempting to give computers to Cuba's Jewish community), and the release of 53 political prisoners.

Obama proclaimed the bargain a great breakthrough that would "begin a new chapter among the nations of the Americas" and replace a "rigid policy that is rooted in events that took place before most of us were born."

Raul Castro told his people not to get too excited: "We must not expect that in order for relations with the United States to improve, Cuba will abandon the ideas that it has struggled for."

You can take that to the bank. Cuba did release some political prisoners, though exactly how many remains murky, and the State Department seems uncurious about their names and whereabouts. Two already have been rearrested for attempting to attend a pro-democracy meeting. Just two weeks after the announcement of the diplomatic breakthrough, the BBC reports, Cuba arrested dozens of dissidents who were planning a demonstration in Revolution Square. Raul didn't lie.

In the years since Fidel Castro seized Cuba, its chief exports have been violence, terror and subversion. But it has contributed one precious, shining ornament to the world and especially to the U.S.: Cuban emigres. Admittedly, the Castros didn't send them willingly, but one million left. They carried with them a burning hatred of tyranny and an appreciation for freedom.

Among elected Democrats, Sen. Robert Menendez of New Jersey stands out for his eloquent defense of human rights. As a Cuban American, he seems to have a visceral understanding of despotism -- and he applies that insight to others, such as the Iranian regime. Among Republicans, hardheadedness about foreign threats is more common (if not quite as universal as it once was), but who can deny that Rep. Ileana Ros-Lehtinen, Sen. Marco Rubio and Sen. Ted Cruz bring particular passion and intensity to the defense of freedom?