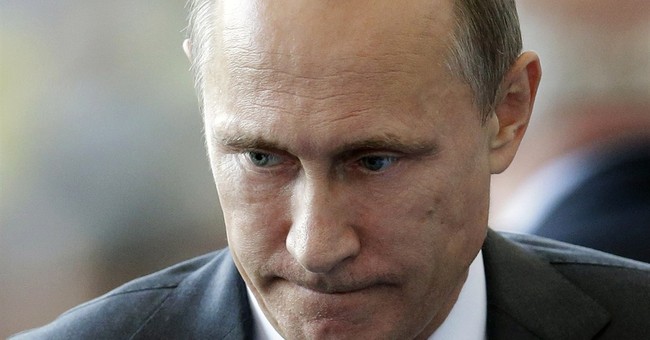 The bodies of 298 passengers and crew of Malaysia Air Flight 17, 80 of them children, lie unburied in a Ukrainian field while Vladimir Putin's men fire their weapons into the air to keep international investigators from approaching the site. Yes, "Putin's men." Calling them "Russian separatists" unnecessarily dignifies them. They are supplied, armed and trained by the despot in the Kremlin.

At the very least, Putin is responsible for arming these dangerous actors. At most, it's possible the missile wasn't fired by Ukrainians at all, but by Russians, which would answer President Barack Obama's question: "What do they have to hide?" The SA-11 is apparently a complex system requiring four well-trained weapons specialists to operate. In either case, the man with blood on his hands is Putin.

Obama began relations with Russia with a "reset." The premise of this new start was that relations between our nations had deteriorated due to the policies of former President George W. Bush.

But Obama was following the same trajectory as his predecessor. Bush, too, began with high hopes for Putin. He was even taken in, for a short time, by Putin's profession of religious faith -- surely one of the biggest cons of modern diplomacy. As Bush watched Putin commit one aggressive act after another, both domestically and internationally, he wised up. Midway through his second term, journalist Peter Baker writes, when Tony Blair said he was more worried than ever about Putin, Bush replied, "You should be."

Bush may have clung too long to the hope of moderating the criminal in the Kremlin, but Obama had even less excuse. He had the benefit of Bush's experience. He had witnessed Putin's invasion of Georgia in 2008, his unflagging support for Iran and Syria, his use of oil and gas to intimidate Ukraine and other nations, his obliteration of democracy in Russia, his muzzling of the press, and his systematic murder of domestic critics. Funny that Obama would have thought that responsibility for the decay in relations should be laid at the feet of Bush.

When Putin took command of the FSB (the KGB renamed), Russia was enduring international criticism for its war in Chechnya. Moscow apartment complexes experienced a wave of bombings that killed several hundred. Putin pointed the finger at Chechens, and the enraged Russian people endorsed the continuation of the war.

Some members of the Kovalev Commission, appointed to investigate the bombings, expressed interest in accounts of possible FSB responsibility for the attacks. Here's what happened to them: Sergei Yushenkov, co-chairman of the commission and a member of the Liberal Russia party, was assassinated in front of his apartment; Yuri Shchekochikhin, another commission member, independent journalist and Duma member, was poisoned with thallium; and Mikhail Trepashkin was arrested on a weapons charge that later morphed into an espionage case. He was tried in a closed military proceeding and condemned to four years in prison.

A KBG defector, Alexander Litvinenko, wrote a book called "Blowing Up Russia" alleging that the FSB was responsible for the Moscow bombings. He died, slowly, of poisoning with polonium-210. Litvinenko had also accused Putin of arranging the murder of Anna Politkovskaya -- a Russian journalist and critic of Putin and the Chechnya war. She was gunned down in the elevator of her apartment in 2006.

Putin has applied the logic of the Moscow bombings (stoke hatred of others to rally Russians around himself) to relations with other nations. Russian state TV, after labeling the elected government in Kiev, Ukraine, as Nazi for months, recently accused the Ukrainian army of crucifying a 3-year-old boy. Russian media feature an almost daily diet of conspiracies supposedly concocted by Americans to undermine and humiliate Russia.

For about the 100th time, Obama this week warned Putin that if he didn't cooperate in the Malaysia plane investigation, he would risk "isolating" Russia from the international community.

Putin doesn't seek to be part of any community. He seeks to be feared -- and he should be. A look back at recent history shows clearly that he is incapable of shame and deaf to conscience. In light of this, Obama can at least do a few things: 1) arm the Ukrainians with something considerably more lethal than MREs; 2) stop placing phone calls to the Kremlin -- we should have nothing to say to him; 3) fast-track liquefied natural gas export permits; and 4) freeze the assets of Putin and his cronies just as we did to Saddam Hussein.

The thing that needs a reset is our perception of Putin.