Cleveland Could Be Good for GOP, if ... 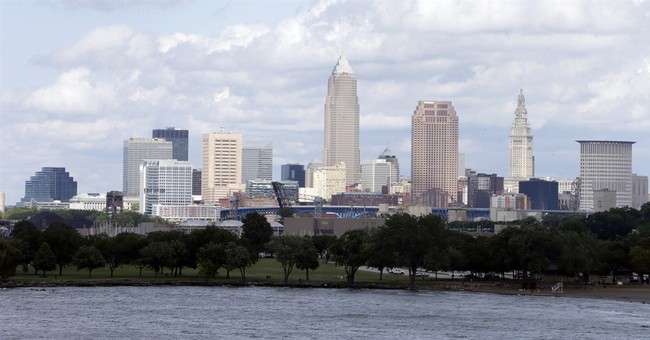 Trending
You needn't be clairvoyant to deduce what the Democratic Party wants to run on in 2016. It really doesn't matter whether their nominee is Hillary Clinton or someone else. Democrats won't be campaigning on the thriving economy under President Barack Obama, global stability under American leadership, the successful routing of al-Qaida or Obamacare. No, the Democratic Party is the ladies' party now -- dependent completely on the lopsided votes of single females for their electoral success. To the degree possible, 2016 will be about women's sex lives and who should pay for IUDs.

Republicans have perfectly good responses to these juvenile arguments, starting with "buy your own blankety-blank contraceptives" and moving up to sensible health care reform. Still, Republicans (and grown-ups) are not well-served if the election revolves around condoms and morning after pills.

I take it as a good sign that the Republican National Committee has chosen to hold its convention in Cleveland. One undeniable bonus will be musical. The Cleveland Orchestra is one of the nation's finest. If good music isn't to your taste, Cleveland is also home to the Rock and Roll Hall of Fame. (Just kidding, don't write me!) In any case, both of those local institutions should coax convention planners away from the monotonous diet of country music that has so dominated recent Republican conventions.

Beyond music, the Cleveland location opens whole vistas for the Republican Party.

America's big cities are nearly all Democratic monopolies. Republicans will have to be tactful about this -- it would be very bad form to trash their host city -- but the locale does present an opportunity to stress their solidarity with the poor of America's cities who have been ill-served by Democratic government.

The poverty rate in Cleveland is the nation's third highest for cities of more than 200,000. According to the 2010 census, 53 percent of Clevelanders younger than age 18 live in poverty. The unemployment rate is an unhealthy 8.5 percent; not as terrible as Detroit (14.5), but not anything close to the other city the RNC was considering, Dallas (5.1).

The public school system in Cleveland performs poorly, though per pupil spending was $15,000 in the 2011 school year, compared with an Ohio average of $10,700. Only around 55 percent of students complete high school. During the 2010-11 school year, the Associated Press reports, Cleveland was one of six school districts found guilty of falsifying students' test scores in order to boost their standing on the state's "report card." In 2009-10, according to state data, only 40 percent of fifth-graders could demonstrate basic grade-level reading skills, and only 29 percent could do the same for math.

Cleveland is moving toward more charter schools, but results have so far been less than stellar. According to an analysis by Public Impact, urban charter students in Ohio scored just a couple of points ahead of public school students in reading and math. More thorough reform is urgent.

Cleveland is among the 11 most dangerous cities in the U.S. An estimated 76,000 housing units are empty and decaying in the metropolitan area, offering gangs and drug dealers ideal environments. And while the murder rate is not as high as in some cities, Cleveland has a very high rate of rape.

Public corruption has plagued the city and county for decades. Hundreds of public officials have been convicted of bribery, fraud and tax evasion. Jimmy Dimora, a former Cuyahoga County commissioner and Democratic Party leader, was sentenced to 28 years in July 2012 after he was convicted of awarding contracts in exchange for more than $166,000 in cash, home improvements, gambling trips and services from prostitutes. The former county auditor, Frank Russo, could serve 22 years taking more than $1 million in bribes to steer no-bid real estate appraisal contracts.

The city has strengths (aside from LeBron James), such as the renowned Cleveland Clinic. But Obamacare has forced even the Cleveland Clinic to lay off employees. "Health care reform has really changed things, and the burden of cost is going to be falling on patients," a spokeswoman told the Plain Dealer.

Will Republicans make inroads among African-American and Hispanic voters by stressing their solutions to poverty, bad schools, unsafe streets and public corruption? Who knows? They could hardly do worse than in 2012. But some emphasis on the rot that afflicts large chunks of urban America will help to change the image of the Republican Party -- and that could affect voters far beyond Cuyahoga County.