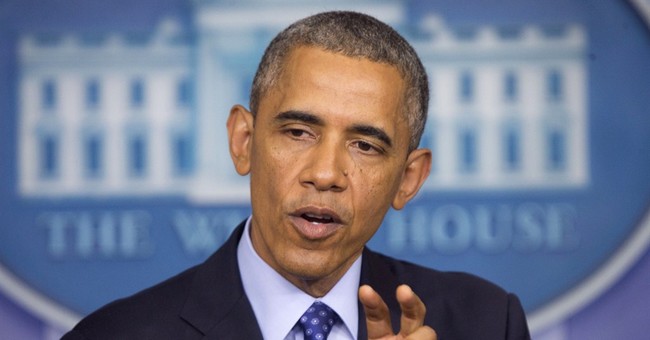 Trending
Among Republicans, the debate over America's proper world role is vigorous. Sen. Rand Paul blames the current disarray in Iraq on George W. Bush and Dick Cheney. "Were they right in their predictions? Were there weapons of mass destruction there? Was the war won in 2005, when many of those people said it was won?"

Cheney, civil but direct, defends his decisions and warns that Paul's "isolationism" is unwise. "He doesn't believe we ought to be involved in that part of the world. That didn't work in the 1930s, it sure as heck won't work in the aftermath of 9/11."

That, ladies and gentlemen, is how a substantive debate about serious matters is conducted. One side makes its case; the other side responds. May the better argument win.

That's not the way Democrats roll. James Fallows of The Atlantic tweeted, "Working hypothesis: no one who stumped for original Iraq invasion gets to give 'advice' about disaster now. Or should get listened to." Sen. Barbara Boxer called Cheney's criticism of President Barack Obama "sick," adding "that's just like, you know, a nightmare come back to haunt me, just frankly." Katrina vanden Heuvel asked, "If so many were wrong about Iraq in 2003, why are they still being invited ... on Sunday morning talk shows and op-ed pages as authorities on U.S.-Iraq policy?" Jamelle Bouie of Slate suggested that those who backed the original invasion of Iraq "should be barred from public comment."

As Jonathan Chait notes in New York Magazine, silencing everyone who's ever been considered "wrong" about an issue would create quite a precedent. Chait mentions that many liberals were wrong about the first Gulf War, predicting 45,000 U.S. dead. He needn't stop there.

Most American liberals would have lost their right to speak after they were proved wrong about (ready?) the USSR, Communist China, Fidel Castro, the FMLN in El Salvador (John Kerry in the forefront), the Sandinistas, intermediate-range missiles in Europe, the nuclear freeze, the Strategic Defense Initiative, the Khmer Rouge, Rwanda, treating al-Qaida as a police matter after the embassy bombings and the attack on the USS Cole in the late 1990s, and much more.

The left seems to have an illiberal desire to shut down arguments. The president tells us that the debate over Obamacare is "over." Half a dozen right-of-center thinkers are disinvited from universities. Brendan Eich is fired for contributing to an unfashionable political cause. A professor suggests that those who differ on climate change should be arrested. And a number of leading liberals declare that anyone who supported the invasion of Iraq in 2003 is terminally discredited.

Leftists have spun a remarkably cynical and dishonest myth about the Iraq War. The fable has it that Bush "lied" about Iraq's weapons of mass destruction and took the nation to war on "false pretenses."

There are many legitimate criticisms that can be leveled at Bush's conduct of the war, but the "false pretenses" canard is ludicrous. If Bush lied, then he must have been quite the Svengali, because he got many leading Democrats in America to tell the same lie. Sens. John Kerry, Tom Daschle, Dianne Feinstein, Joe Lieberman and others signed a letter to President Bill Clinton in 1998 urging him to act, militarily if necessary, to "respond effectively to the threat posed by Iraq's refusal to end its weapons of mass destruction programs."

Boxer, whose stomach is so sensitive, might want to avoid her own history of "lies" about Iraq's WMDs. In 2002 she said, "Iraq made commitments after the Gulf War to completely dismantle all weapons of mass destruction, and unfortunately, Iraq has not lived up to its agreement."

The late Ted Kennedy was equally blunt: "There is no doubt that Saddam Hussein's regime is a serious danger, that he is a tyrant, and that his pursuit of lethal weapons of mass destruction cannot be tolerated. He must be disarmed." The list of Democrats who said identical things includes Bill Clinton, Hillary Clinton, Kerry, Nancy Pelosi and many more. Fifty-eight percent of Democratic senators voted in favor of the resolution to use force against Hussein in 2002.

Sure Bush made mistakes, but he corrected them in time to salvage the sacrifices of more than 4,000 Americans. When he handed off Iraq to Obama in 2009, it was a success.

Too hard won? Not worth it? That's a debate Republicans are still having. But Democrats aren't engaged in debate. They're engaged in a deceitful effort to distort history.