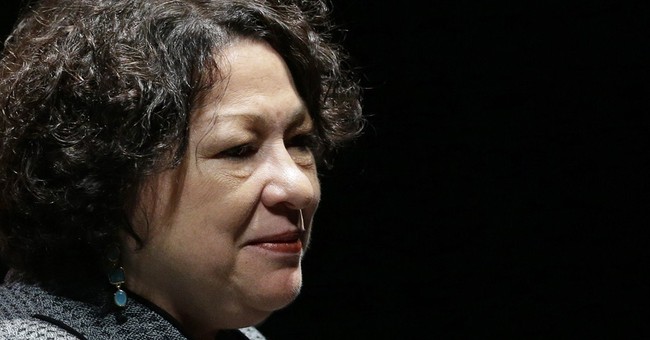 Sonia Sotomayor is a wonderful role model. Truly. Through hard work, brains and rare self-discipline at an early age, she was able to overcome poverty and family dysfunction to become what she is today. She was diagnosed at the age of 7 with Type 1 diabetes, and because her father was an alcoholic and her mother a full-time nurse, it fell to her to manage the daily insulin injections and testing that are part of the required treatment. The image, in her memoir, of a small girl dragging a chair to the stove so she could sterilize her syringes before school is poignant indeed.

Any person attempting to overcome hardship can look to Sotomayor for inspiration. But as she demonstrated in her long, impassioned dissent in the case of Schuette v. Coalition to Defend Affirmative Action, the experience of benefiting from race preferences has left her prickly and defensive on the subject. As others, including her Supreme Court colleague Justice Clarence Thomas, have argued, that kind of gnawing insecurity is one of the consequences of preferences. Others are never sure if you've achieved your position entirely on merit, and neither are you.

Sotomayor's argument rests entirely on a fallacy -- that lowering admission standards for certain minority applicants is the only possible response to concerns about racial and ethnic disparities in American life. "Race matters," she scolded again and again in her dissent. Actually, she went further and argued that a Michigan constitutional amendment that explicitly forbids racial discrimination amounts to racial discrimination.

The contention that white, Asian and other students should be disadvantaged because of discrimination against blacks that ceased decades before they were born is facially unjust. Under the regime of preferences, the white child of a poor waitress from Scranton, Pennsylvania, who would be the first person in her family to ever attend college, will have to get SAT scores about 300 points higher (depending upon the school) than the black daughter of a dermatologist from Beverly Hills, California. An Asian student would have to score even higher, because that minority is, according to those who insist on counting by race, "overrepresented."

Admissions officers at selective schools pretend they are offering opportunity to "underserved" minorities, but in reality, they are simply lowering standards for already-privileged students with the preferred skin tone. Ninety-two percent of blacks at elite colleges are from the top half of the income distribution. A study a decade ago at Harvard Law School found that only a third of students had four African-American grandparents. Another third were from interracial families. The rest were children of recent immigrants from Africa or the West Indies.

Should mixed-race students get half a preference? Should their scores be 50 percent higher than students with two black parents? These are the kinds of absurdities our current system presents.

Racial and ethnic preferences are unjust -- reason enough to abandon them -- but there are other reasons as well. They serve to perpetuate, rather than combat, racial stereotypes. They encourage gaming the system (as when Elizabeth Warren claimed to be Native American). They permit students from certain groups to coast in high school knowing they will get an automatic golden ticket to college. They encourage intergroup resentment. They result in what Stuart Taylor Jr. and Richard Sander have rightly called "mismatching" students -- so that all but the very top minority students wind up attending schools that are a little out of their league. This, in turn, causes more minority students to abandon demanding majors like science and technology (so necessary for the economy's flourishing), and to drop out in numbers far higher than other students. Black students are about a third more likely than similarly qualified other students to start college, but less likely to finish.

Dropping preferences is not harmful to minority students; it's beneficial. It should not be the end of the story, though. The gap in achievement between some minority groups and others can and should be addressed. Contra Sotomayor, it's not so much that "race matters" as that schools matter. The shame of the nation is that poor children continue to be so trapped in terrible schools. That is the disgrace that race counters cloak.