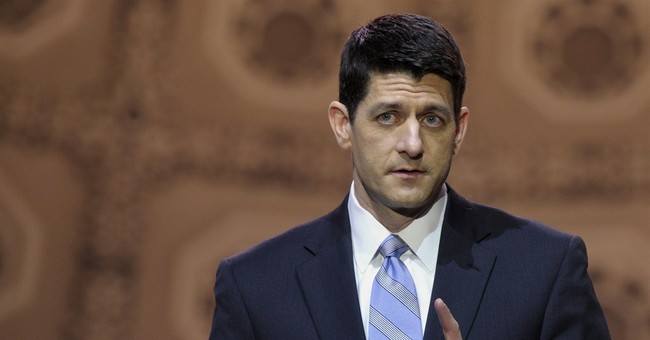 The defamation of Paul Ryan as a racist for noting the multigenerational persistence of joblessness in troubled neighborhoods is more than just another episode of hysterical name-calling by the left. The episode represents, in microcosm, the left's intellectual bankruptcy.

Ryan's comments were not just true and well-intentioned; they were obviously so. Even if Ryan were not already known for his lifelong commitment to anti-poverty efforts for all races, even if he had not regularly accompanied John L. Lewis on his annual pilgrimage to the Edmund Pettus Bridge in Selma, Ala., and even if he had not agitated to do more 2012 campaign events in minority neighborhoods, the words he used on Bill Bennett's program tell the story.

After referring to our "tailspin" of a culture in which too many men are disconnected from the world of work and family life, Ryan said, "Everyone has got to get involved. So this is what we talk about when we talk about civil society, if you're driving from the suburbs to the sports arena downtown by these blighted neighborhoods, you can't just say: 'I'm paying my taxes and government is going to fix that.' You need to get involved. You need to get involved yourself -- whether through a good mentor program or some religious charity, whatever it is to make a difference. And that's how we help resuscitate our culture."

As Rich Lowry has observed, Ryan's comments were indistinguishable in every respect from comments President Barack Obama has made many times. Ryan's accusers know this perfectly well. Their grubby eagerness to engage in character assassination must be understood as part of a strategy. Demonizing the right is the only weapon that remains to them.

The 2012 campaign was the template. What was the race about? Was it about health care, the state of the economy, foreign policy, energy, growth, poverty, jobs? No. The Obama team succeeded in making it about Mitt Romney and his supposed heartlessness. A post-election poll found that voters preferred Romney on three out of four measures of leadership. On "vision" he prevailed 54-45. On "shares my values," he won 55-42. On "strong leadership," voters preferred Romney by 61-38. But on "cares about the problems of people like me," Obama dominated by 81-18.

When Ryan talks about the poor with such evident sincerity, he threatens the carefully tended bogeyman so necessary to Democrats' success -- the evil, heartless Republican. I imagine that Ryan apologized -- he said he'd been "inarticulate" -- to blunt the criticism, but I wish he hadn't. Far better to turn the camera around and reveal the tactics of his accusers. They are hoping to intimidate him. They are trying to ensure that he hesitates before speaking about poverty again. They are attempting to box him into a corner.

The Democratic playbook consists of little beyond character assassination. The "war on women" is empty of content. What are the specific Republican policies that comprise this war? Legalizing wife beating? Swathing women in burkas? If it's opposing the "free" contraception coverage in Obamacare, well, we can discuss that. First, some "war." Second, there ain't no free lunch (or pills), as Americans are learning. Many people will pay higher premiums to cover the "free" benefits of Obamacare.

That's why Ryan and other Republican reformers are so dangerous. Democrats are vulnerable on their stewardship of America's cities and on their poverty-perpetuating, growth-suppressing ways. Republicans should address these issues because they do care about upward mobility, because they do worry about the poor, because it's important to tell the truth, and because doing so exposes the Democrats' desperate gambit: They cannot explain their failures and resort instead to shrieking, "Watch out: Here come the vote-suppressing, racist, women-hating Republicans!"