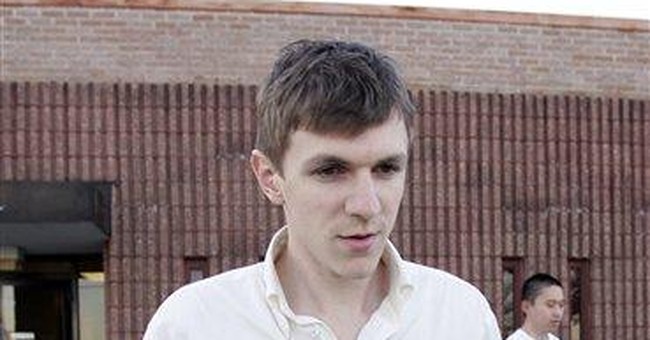 James O'Keefe, who is now felling executives of National Public Radio as he previously trap-doored ACORN, must be a deeply cynical young man. How else could he have imagined that ACORN workers in several cities would cheerfully offer to help him set up brothels using underage Central American girls?

How else could he have imagined that executives of National Public Radio (and apparently PBS, though that video has not surfaced as of this writing) would eagerly truckle to a front group of the Muslim Brotherhood?

But they did. They all did. As a wise woman once said, "No matter how cynical I get, I just can't keep up."

Like the FBI's Abscam sting in the 1970s that netted six congressmen, a senator, and assorted others willing to accept bribes from "Arab sheiks," O'Keefe and his colleagues designed a sting operation that involved activists posing as "Amir Malik" (supposedly from Nigeria, though his accent screamed Caribbean) and "Ibrahim Kasaam." They were, they explained, representatives of MEAC, the "Muslim Education Action Center," a trust that was considering a $5 million donation to NPR.

On the fake website created for the scam, MEAC described its mission as fighting "intolerance" but also "to spread acceptance of sharia across the world." You or I might have been given pause by that second bit, but not Ron Schiller, president of the NPR Foundation, and Betsy Liley, "senior director of institutional giving" at NPR. They showed up for lunch. Even before the risotto was served, Kasaam volunteered that his organization was founded by members of the Muslim Brotherhood, "in America actually." Not an eyelash quivered from the NPR team.

Kasaam expressed his discontent with "the current discourse" in America, particularly as it concerned Muslims. This elicited enthusiastic nodding from Schiller and Liley. Schiller rhapsodized about NPR being the "voice of reason" -- nearly the only place Americans could turn for "fair and balanced" news. He used that stolen slogan repeatedly. Schiller and Liley stressed that anti-Muslim bigotry was just the latest iteration of a classic American sin. "We put Japanese-Americans in camps," Liley lamented.

As for those who thought perhaps NPR should do without taxpayer dollars, Schiller noted, "It feels to me as though there is a real anti-intellectual move on the part of a significant part of the Republican Party." And then, inexplicably, this: "The current Republican Party, particularly the Tea Party, is fanatically involved in people's personal lives and very fundamental Christian -- I wouldn't even call it Christian. It's this weird evangelical sort of move..."

Really? All those thousands of Americans carrying signs and listening to speeches about debt and taxes and spending and bankruptcy -- they were fundamentalists?

"The Republican Party has been hijacked by this group," Schiller explained to people he thought were representing a Muslim Brotherhood-linked group. They weren't just "Islamophobic, but really xenophobic -- they believe in ... right-wing, middle-America, gun-toting ... I mean it's scary. They're seriously racist, racist people."

Again and again in the course of two hours (full video is available at theprojectveritas.com), Schiller described NPR's listeners as "educated and intelligent," unlike you-know-who. It's of course ridiculous to say that NPR is "liberal" -- but, just among ourselves -- "liberals (are) more educated, fair, and balanced." There's that phrase again!

What Schiller dislikes about America is that "people like to make snap judgments ... that all gays are after your children, that blacks are going to stab you ... NPR is constantly trying to break through that." But it's hard, because such "a small percentage of the population" is educated and intelligent.

Told that NPR is affectionately referred to as National Palestinian Radio among his compatriots, Schiller and Liley laughed, and Liley exclaimed, "Really? I love that!" Schiller suggested that NPR was neither "pro-Israel nor anti-Israel" but didn't hesitate to boast to his "Muslim" hosts that NPR's Israel coverage had offended a prominent Jewish American family so much that they withdrew their funding.

Ah, exclaimed Kasaam, this underscores the degree to which the American press is controlled by Jews and Zionists. Most of the press, Kasaam continued, is accordingly pro-Zionist.

"I don't find that at NPR," Schiller offered. "Obviously" you find it among people "who own newspapers," he continued. "But no one owns NPR, so I actually don't find it."

Thank goodness Schiller is among the "educated and intelligent" elite -- those who would never dream of stigmatizing minorities, dealing in stereotypes, or sanctioning bigotry. Thank goodness he would never consider slandering his countrymen in order to curry favor with people he had every reason to suspect were Islamic extremists.

Thank O'Keefe that Schiller and his boss are out of their jobs. It's a start.