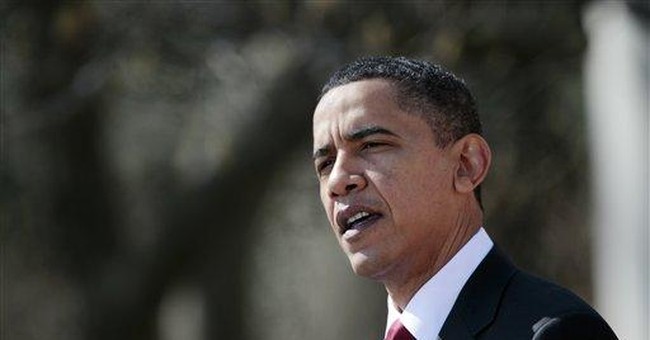 Funny, President Obama was supposed to be against an arrogant foreign policy. Remember his speech in Strasbourg, France last spring? There had been times, he told the European students, "where America has shown arrogance and been dismissive, even derisive." Those days are over, he assured them.

Leave aside the question as to whether this characterization of past American arrogance was justified. President Obama now has a year of foreign policy under his belt and in that time he has managed to snub the British prime minister, alienate the president of France, insult the nation of Honduras when it successfully defended its young democracy from a Chavez wannabe, and undercut the people of the Czech Republic and Poland by tossing aside a hard-won agreement to build a missile defense shield.

But in no case has his own arrogance been more transparent than in his treatment of Israel. It didn't begin with the recent spat over housing units in Jerusalem. In formulating his policy, the president could have focused his energy on the problem of a terror regime racing toward acquisition of nuclear bombs. He could have noticed the civil war raging between Hamas and the Palestinian Authority. He might have addressed the venomous anti-Semitism and race hatred offered as daily fare in Palestinian media and textbooks.

But from its inception, this administration has signaled that it regards Israeli behavior as the chief obstacle to peace in the region. Israel must halt settlements, the president told Prime Minister Netanyahu, or the relationship between the U.S. and Israel would suffer. Seeing the United States acting as its lawyer, the Palestinian Authority, which in the past had negotiated with Israel without preconditions, could not then set the bar lower than the U.S. president.

Though it received little attention at the time, Obama's rebuke of Israel at the United Nations last October was, particularly in that venue, a deeply unfriendly act. "We continue to emphasize that America does not accept the legitimacy of continued Israeli settlements," the president intoned. As former U.N. Ambassador John Bolton noted at the time, the use of the phrase "continued" rather than "new" potentially delegitimized every inch of land on which Jews reside. That nuance would not have been lost on the Palestinians, who regard all of Israel as "occupied territory."

Even stipulating that the announcement of new construction in Ramat Shlomo was ill timed, the president's response was extraordinary. Despite the fact that Netanyahu apologized for the bureaucratic gaffe, the president very publicly instructed his secretary of state to call Netanyahu two days later to scold him further -- a task the secretary of state apparently fulfilled with gusto.

So while the Obama administration extends its "open hand" to the butchers of Tehran (even after the hand is repeatedly slapped), and truckles to the regime in Syria, it upbraids Israel.

Choosing to excoriate Israel on the matter of these apartments speaks volumes about the president's view of the conflict in general. The president's outrage is highly selective. Two months before Vice President Biden's visit, Mahmoud Abbas, chairman of the PA, attended a "birthday celebration" for the "martyr" Dalal Mughrabi. Mughrabi led 11 terrorists who carried out the 1978 "coastal road" attack, the worst terror attack in Israel's history. Coming ashore near the northern Israeli city of Haifa, Mughrabi and her heavily armed team hijacked two busses filled with tourists, forced all 71 into one bus, and attempted to take it to Tel Aviv. Along the way, they machine-gunned motorists and some of the passengers. Bodies were dumped on the highway. When police finally stopped the bus by shooting out the tires, the terrorists killed as many people as they could (37, including 13 children) and set the bus aflame before being killed themselves.

The day after the vice president departed the region, a square was named for Mughrabi near Ramallah. Tawfiq Tirawi, a member of the Fatah Central Committee (the PA's predecessor organization), told the crowd, "We are all Dalal Mughrabi." Mughrabi is celebrated in other ways as well. Palestinian Media Watch reports that in the past two years, the PA has named two girls high schools, a soccer match, two summer camps, and a computer center after the "martyr."

To get a sense of the true nature of the conflict, the president need do no more than watch kids' television in the Palestinian areas. On the PA program "Chicks," children are encouraged to "explore your country" with a map that shows the entire nation of Israel labeled "Palestine."

Awaiting the secretary of state's outraged call to Abbas.