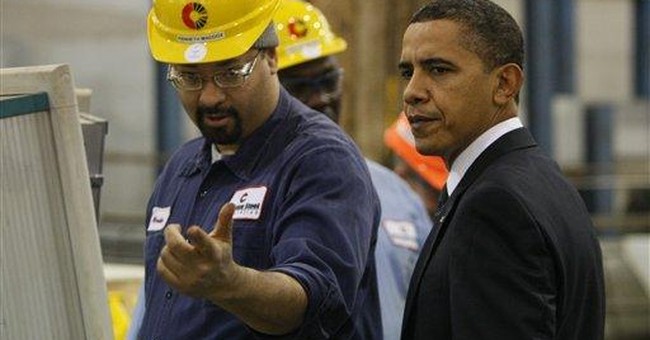 After more than a year in office, the Obama foreign policy based on hope has run its course.

Time after time, the administration has pursued a policy of pre-emptive concession rather than hard bargaining, with predictable results. In Europe, the U.S. simply walked away from a defensive missile shield in an effort to hit the "restart" button with Russia. Our allies, Poland and the Czech Republic, who had counted on our commitment, were hung out to dry.

In the Middle East, the U.S. has hectored our best ally in the region, Israel, while assiduously courting Syria. The "open hand" that was so flamboyantly extended to Iran was also offered to Syria. Bashar al-Assad didn't get a videotaped New Year's message from the president, as the mullahs did, but a procession of high-ranking diplomats has trooped to Damascus to offer better relations, trade agreements, and diplomatic recognition. Without preconditions, the administration decided to name a U.S. ambassador to Syria for the first time since 2005, when the U.S. withdrew its ambassador to protest Syria's role in the assassination of Lebanese Prime Minister Rafik Hariri. The administration might have asked for any number of commitments in exchange -- an end to support for insurgents in Iraq or cutting off aid to Hezbollah and Hamas -- but it chose hope instead.

Secretary of State Hillary Clinton did make one request, though -- that Syria reciprocate for these gestures by distancing itself from Iran. Last week, al-Assad responded. Hosting Iran's president, Mahmoud Ahmadinejad, in Damascus, al-Assad ostentatiously signed a treaty of friendship with Iran and said of the secretary of state's request, "I find it strange how they talk about Middle East stability and at the same time talk about dividing two countries." Further mocking her, al-Assad joked, "We must have understood Clinton wrong because of bad translation or our limited understanding, so we signed the agreement."

The administration has been similarly accommodating toward China, starting with Secretary Clinton's February 2009 declaration that human rights issues in China "can't interfere with the global economic crisis, the global climate change crisis, and the security crisis." The president followed up by declining to see the Dalai Lama before his November trip to China (though, he did finally host him last month). While there, Obama tamely agreed to speak before an audience of carefully chosen communist party students, without any assurance that his comments would be broadcast live.

The president's defenders argued that the soft approach to China would yield dividends in other areas -- such as Chinese support for tough sanctions against Iran. That fond expectation is now being tested.

Late, very late, the Obama administration has gotten around to the arduous process of pursuing sanctions on Iran. In May 2009, the president said "we're not going to have talks forever" and estimated that "by the end of the year," he'd re-evaluate. In July, watching the regime's thugs shoot down protesters in the streets, he accelerated the timetable slightly, saying that the Iranians would need to prove their bona fides by September.

Something did happen in September: Word reached Obama and other world leaders that Iran had built a secret nuclear enrichment facility outside the city of Qom. The president was scheduled to address the United Nations on Sept. 24 and preside over the Security Council the next day. It would have been a perfect moment to confront Iran about its duplicity, abandon the policy of "engagement," and rally international support, as French president Nicolas Sarkozy urged. But the president said nothing. He didn't want the "diversion" of Iran to detract attention from his nuclear disarmament message. This prompted Charles Krauthammer to note the president's achievement in getting to France's left on foreign policy.

Now the administration is hoping to get United Nations backing for a series of sanctions reportedly including choking off access to international credit and limiting oil exports. Are the Russians and Chinese on board? Spokesman Robert Gibbs has been long on hope, touting "the resolve and unity of the international community with regard to Iran's nuclear program."

But this week, the Chinese told the Security Council that there is still room for diplomacy, and the Russians advised that there is "still a horizon" for negotiations.

This is what comes of using a smile for your umbrella.